The Business of Borrowing Boats

In the spring 2010, while reporting for the Beacon newspaper, I stopped charter guest Darrel Hoizinga on Prickly Pear Beach and asked him a few questions. The San Francisco vacationer explained to me that he joined the majority with worries about the looming economic recession. However, he said, “I work for my toys.”

As we move forward through questionable times, it seems many are following the US tourist’s mantra: work hard, play hard. With high season upon us, yacht charter companies—both corporate and boutique—are reporting high booking numbers along with a newfound hope for a readjusted marketplace in the British Virgin Islands.

By all appearances, the charter industry—from crewed to bareboat—is experiencing a resurgence to a growth level noticed among the industry pre-2008. Clearinghouses, and large and small charter companies are reporting growth that far exceeds the slowly reemerging US economy.  That’s good news, too, for the BVI’s economy, where more than $40 million in economic stimulus is accredited yearly to the chartered yacht industry. 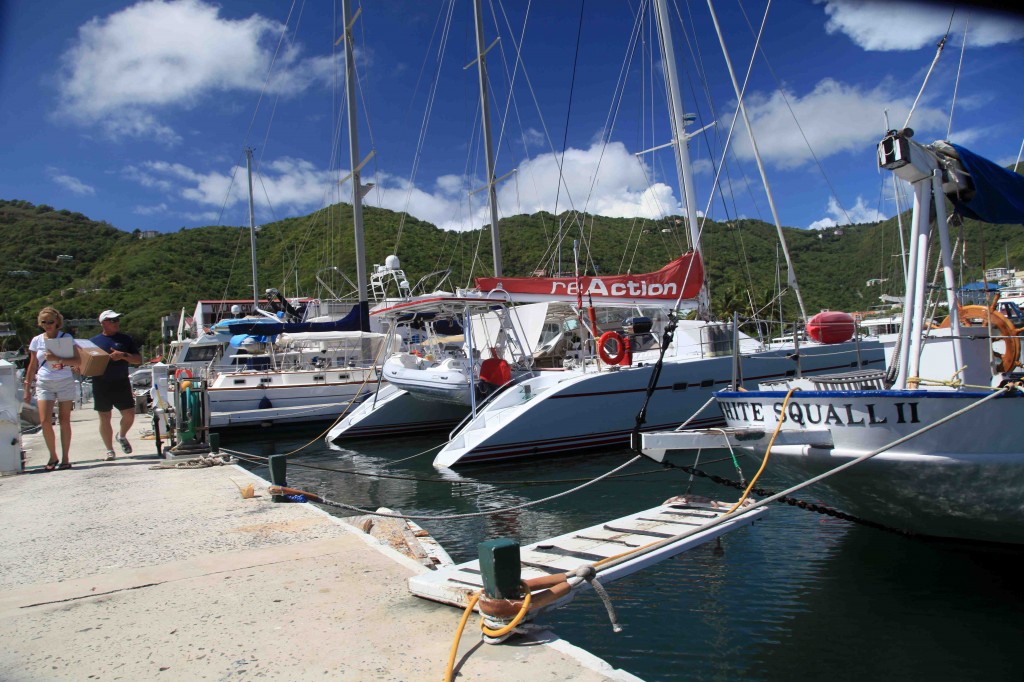 Dick Schoonover, who is the director of Charterport BVI, revealed that the clearinghouse noticed a 16 percent spike in bookings from October last year to this year. As far as a boost goes, the clearinghouse director explained that such a large bump in bookings is almost unheard of—especially during the uncertainties associated with a US election year.

“One would think you’d be happy with a 5 percent increase—but with something like this, people ask what justifies it,” the 22-year veteran said of the 16 percent bookings increase. “You’ve got to remember: We’re in a business that throws you a curveball right when you think you’ve got everything figured out.”

The majority of the tourism industry was dealt a screwball of sorts when the US stock market plummeted at the end of 2008—those in the boating business especially included. Schoonover described the time as “dismal” for all. However, he explained that he deals with a high-end clientele that didn’t waver too much with the decision to part with their vacation time and cause the industry to plummet to a level of no return. They thrive off these return clients who work to play, he explained. 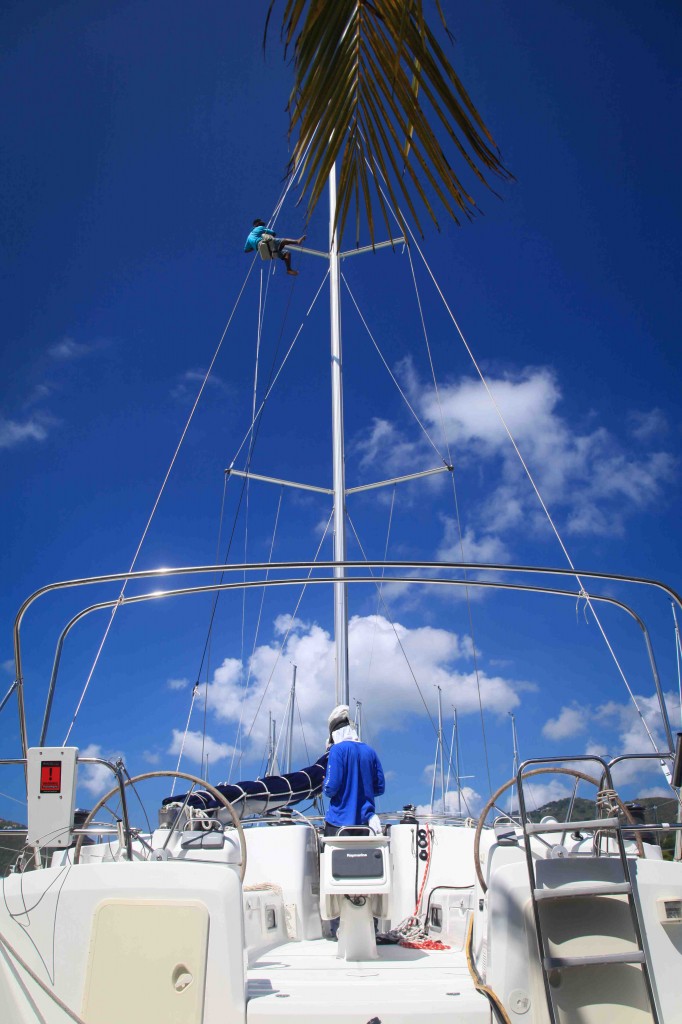 At The Moorings, where TUI Marine has established a commanding fleet of about 300 vessels, employees are retaining a sense of optimism moving into these crucial months.

The facility, which was originally built in 1969, stands as a pioneer in the BVI’s charter yacht industry. I spoke with TUI Marketing Manager Carol Hansen, who explained that other factors—like gas prices and the presidential election—tend to influence their potential customers’ decisions to book in advance.

“We are booking well in comparison to last year,” she explained, “and customers are booking further in advance. But with higher airfares, there’s a trend toward chartering closer to home.” As a response, she continued, TUI has opened new charter bases in the US to help supply client needs. “For 2012, we’ve opened in Annapolis. … We will open our new Miami location in the Spring of 2013.”

Although the marketing manager was unable to provide exact booking numbers for The Moorings facility, she explained that repeat guests and an established reputation in the BVI draws a steady number of arrivals.

Since The Moorings was first established in the late 1960s, word has traveled about this idyllic sailing destination. Now, many point to the BVI as the charter capital of the Caribbean. With this title has come a demand for new and unique chartering options.

Now, choices extend to charter companies that occupy almost every marina in the territory. I spoke with Jo-Anne Downing, director of Voyage Yacht Charters out of Sopers Hole, who explained that they have benefited from a base of loyal return clients who prefer the close customer relationship they receive from Voyage.

“We’re way up [with bookings] this year, and we’re very confident moving into the season,” she said. “We’ve been fortunate that we haven’t had to lay anyone off, which was quite a miracle.”

Voyage maintains a fleet of 33 vessels, including 28 bareboats—all under local licensing. Over the past few years, as the recession rippled through the BVI, Downing explained that the company had to significantly discount their fleet to a rate that only allowed them to “break even—just enough to pay salaries and maintenance.” However, the 2012 season has allowed them to bring their prices back to a profitable level, while attracting a healthy number of clients—who consist of a 95 percent American base. 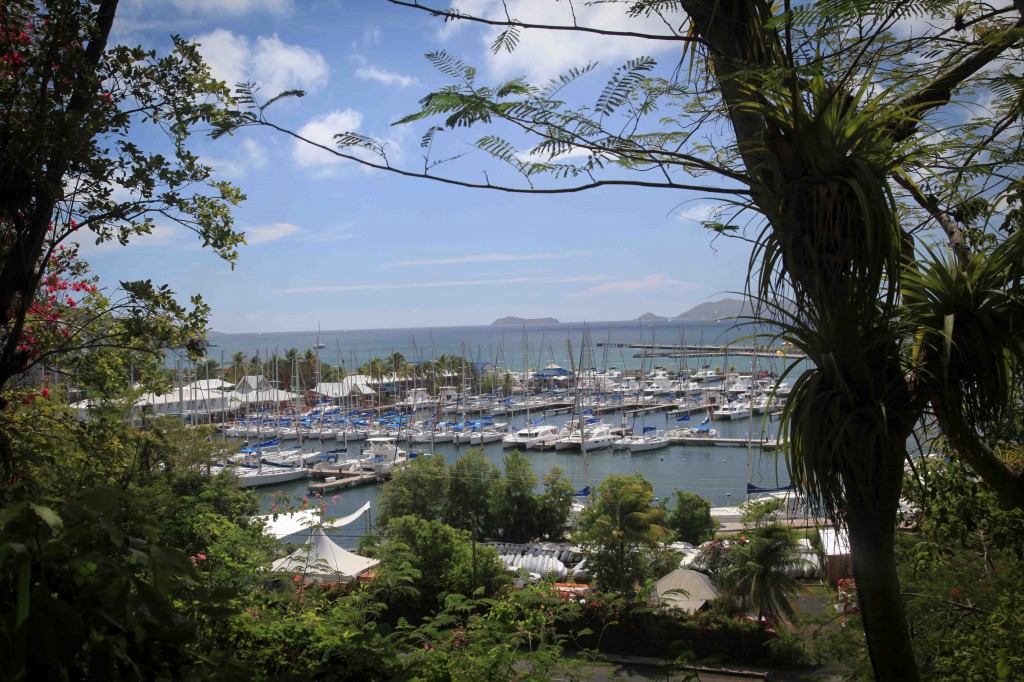 For private boat owners, who depend on a captain and broker to push individual charters through the season, the BVI Charter Yacht Society Boat Show is the capstone event. The 31st annual event pulls into Nanny Cay this year, with 90 boats registered to show, and a lengthy waiting list should any bail out.

This important event allows international brokers—largely from the US—to meet with the captains and crews of some of the showcase private charters in the BVI. It’s these interactions that can either make or break a boat’s chances to find their earnings in a profitable margin at the end of the high season.

“It’s really important when a broker is trying to sell that vacation package that they understand the personalities of the crew,” explained CYS Director Janet Oliver, who is also the organizer of this year’s event. “The broker has these important choices to make between that boat or this boat, and they want to guide their clients to a crew they believe has the charisma and is the perfect fit for them.”

To help stimulate this interaction, the Boat Show not only allows for an open house, meet-and-greet setting, but there’s also a schedule of events to allow for crews to show off their product. “Travel the Nations,” for example, calls for crews to cook up tasty appetizers and treats from international countries, while entertaining the guests and brokers that visit their vessels.

Crews are encouraged to dress in appropriate garb and participate in cultural song and dance. The scene conjures memories of a high school mixer, and I suppose at the end of the day it is all about finding a suitable partner.

Oliver explained that the charter industry seems to operate as a separate entity of the tourism industry. And although many associate sailing with the BVI, it’s up to the individual boat owners or charter companies to prove to them that they are the right choice out of so many others.

As the high season once again falls upon us, brokers, captains, crews, charter company managers, mechanics, boat cleaners, store owners and a slew of other affected parties will hope that the economic forecast ahead provides for smooth sailing.