Mega Yachts, Mega Marinas – Yacht Haven Grande – A short trip on a 140’ mega yacht is really quite exhilarating, especially when you’re used to sailing the IC24s.  But when your view from the bridge is blocked out by the Rising Sun, it takes the wind out of your sails.   At 452 feet in length, the second largest privately owned mega-yacht in the world, Rising Sun, is so big she’s actually difficult to look at if you’re standing too close.

Such was the scene on the 17th of March when the Marina’s grand opening lit up the night sky above Charlotte Amalie with fireworks.  Throwing not your average party, the new marina served a few thousand people champagne while they ogled diamonds, elegant clothing shops, big boats and even the Beach Boys.  Guests ranged from the extraordinarily wealthy boat owners and their crew to members of the media, brand ubermanagement and, of course, myriad politicians.  A very different scene from the weathered hotel and piers located there 5 years and $160 million ago.

This tropical cocktail mix of business, wealth, and government was brought to us by Island Global Yachting, a 2-year-old company formed to build and acquire large scale marina developments.  They boast ownership or management of 19 marinas from Dubai to the Caribbean, and you’ll have no problem recognizing Village Cay and Virgin Gorda Yacht Harbour in their portfolio since their acquisition of Sun Resorts International.

Closer to home
So who cares, really? We’re in the BVI, St Thomas is ‘over there’, and we don’t have much to do with mega yachts.  But, if the truth be told, those big boats are coming into BVI waters; it’s not just bareboats that speckle our views of Drake’s Channel.  Nanny Cay and Village Cay are both looking to cater to larger yachts.  Their capacity to store multiple mega-yachts, though, is thus far geographically limited.  Virgin Gorda Yacht Harbour, Village Cay, Nanny Cay, and even the Bitter End have fantastic facilities for most boats, but can only hold one, two, or perhaps three 140’ yachts at max capacity.

But, the Beef Island project is now under way and IGY will be building the marina to go with it.  We’re told this marina will accommodate 170’ with 15’ drafts.  So far, 11 slips are predicted for the big boats giving it the highest capacity for this market.

BVI Challenge
“The Mega Yacht sector is clearly one which is evolving in the Territory,” says Russell Harrigan, Chairman of the BVI Tourist Board.  “They will become an important part of the Territory’s tourism market. “

Before that can develop further, the BVI may have a few challenges.  From speaking to a few crew and owners it seems that one of the biggest challenges for the BVI from the big boat industry is the available services.  “Infrastructure in the BVI was designed to focus on the needs of the Bareboat and pleasure or monohull sector,” says Harrigan.  So, perhaps the problem is the lack of demand for these high end services.  Whenever these big boats need something done, it has to be done immediately.  They are not going to accept that anything is late and “soon come” is not part of their vocabulary.  They will want a problem to be worked on around the clock until finished because it’s probably too expensive for the boat to sit around waiting.  Assuming you have a $20 million boat and it costs about 10% of that value a year to maintain, it costs almost $5,500/day just to own it.

Charles Garner, IGY’s CIO says “Despite [the BVI] being a leading cruising ground for mega yachts, they do not currently have many locations in the BVI where they can dock.  This means that these yachts are taking advantage of the beautiful natural resources of the BVI by cruising in BVI waters, but have limited ability to contribute to the BVI through expenditures ashore.”

These shortcomings are looking to change.  The BVI’s new Category One Status, along with the large Beef Island project and many other proposed projects, means that it looks like these boats may be pulling enough demand to make the BVI a more sought-after docking destination for the big spenders. 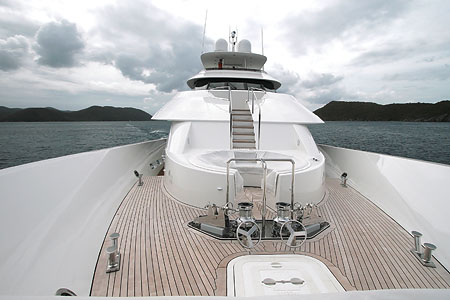