happen at Sea – A cliché it may be, but the tale of the of a shipwrecked 1969 44‘ CNC on the southern shore of Virgin Gorda is a harsh way of telling us that we should never forget that the fate of many an historical pirate ship can be suffered by the modern-day yacht, regardless of the captain’s expertise.    Patrick Fogarty is a hardy Australian sailor with over twenty years of experience, and the Black Angel was his fourth boat.  In July, Patrick collected his newly refitted yacht from Grenada and headed up to the British Virgin Islands in hope of a gentle, relaxing summer.  He had to stop in St Maarten for repairs to the engine – in particular the propeller which had been problematic on the passage.

Confident in his experience and his new boat, Patrick plotted the GPS to coast off the southern shores of Virgin Gorda and swing into the Sir Francis Drake Channel, and set the autopilot to run whilst he took a rest.  The southern Virgin Gorda coastline is sheer, rocky and wild, taking the brunt of the Eastern Trades and rising swell.  Even in daylight, as we travelled to the remote spot where we found the remnants of the Black Angel, the cliffs on the shoreline seemed menacing and inaccessible from either land or sea.

We were out with Husky Salvage & Towing, employed by Patrick to salvage what was left on the boat. Having heard Patrick’s story, each of us spent the journey wondering just what sight awaited us.  Nothing, though, could have prepared us for the reality.  The Black Angel lay on her side wedged against the cliff face, her mast broken off and the keel hammered through her hull leaving a gaping wound in her belly through which her engine parts, like entrails, gruesomely spilled.

Patrick was keen to retrieve his personal effects and anything else he had come to value after a life at sea.  As we observed the wreckage from the safety of the RIB some 500 metres off shore, Patrick’s emotions surged.  “I lost a hardy boat, but she saved my life,” he remarked with tears in his eyes.

At 1:00 am that fatal morning, Patrick arose from his bunk and set about preparing his breakfast.  He checked the autopilot, as he had done on a hundred previous occasions on his approach to port, but noted and logged that although he was 300 metres off shore he was, if anything, 50 metres off his bearings.  The light from the moon showed the waves crashing against the rugged shoreline and, given the high seas, a closing squall and 18 knots of wind, he thought it best to coast further offshore.   Patrick reefed his sails, switched on the engine and attempted to get back on course.  The engine, though, didn’t sound very healthy and within minutes Black Angel and her prop had parted company.

The boat, stationary for about 30 seconds, began listing broadside to the waves.  Patrick knew immediately that he was in danger.   Without power from sail or engine, he was unable to stop the pounding waves from pushing the boat sideways on to the shore.

The first sign of impact was the lower hull cracking on what we later saw was a reef shelf.  The swell, on our recovery mission, was up to four foot in about 10 knots of wind.  In 18 knots the swell must have seemed almost insurmountable.   On that night, as the squall set in, Black Angel was lifted by a bigger wave set.  She was slammed against the reef again and again before being lifted, her hull screaming as the jagged surfaces tore along her bottom, over the reef and dashed against the cliff.  There she came to the end of her days.

Patrick is a man with an extreme sense of humour.  He sent out a mayday call to which VISAR of Virgin Gorda responded.  However, on reassessment of the situation, he suggested they stood down until daylight.  He was, after all, safe onshore and on his boat.  The next day, when Husky met the Captain of the Black Angel they were offered cans of beer from a silver tray, a grinning Patrick asking, “Tea, anyone?”

The rough seas prolonged safe recovery of the vessel for a week after the wreck, and even now swimming in was a hazardous occupation.  Bashed against the rocks by the swell, each swimmer was given a sense of what the boat went through. We set up a relay system to receive the floating trunks containing Patrick’s effects, but it was soon evident that we needed more men on the ground, so to speak. I swam to join them whilst helmsman Nico held boat steady.   On shore, the extent of carnage left me dumbstruck.

Black Angel was obviously never going to take to the seas again, and still the waves were taking their toll on the remnants of her hull.  Fenders lay scattered across the shoreline; her dinghy was torn to shreds; and the inflated life raft rested a few yards away.  Patrick’s personal affects were strewn across the scene, just above the waterline.   Inside, it looked though someone taken a sledge hammer to her fittings.  Someone probably had – Black Angel’s present state wasn’t a result of the wrecking; she had been looted. 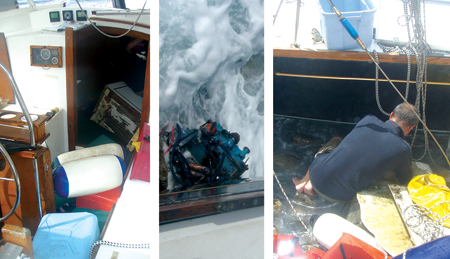 Obviously considered fair game, Black Angel had been stripped of anything of value, from her electronics to her cutlery. The dinghy had been slashed by a knife and Patrick’s clothes lay out on the rocks where they had been rifled through. Nothing was left.  Salvage now seemed a fruitless act.  Patrick was distraught.  “I can take the loss of the boat, but to rape its soul while it’s broken is unheard of.”  We swam furiously against the swell to tow the life raft back, full of nothing really; an intact mainsail, an anchor and a life jacket. We had to let it go in the end, though, as we were unable to tow it over the reef.   Patrick’s salvage attempts left him with a single life jacket bearing the name Black Angel.

In the wake of this devastating experience, Patrick is keen to express how overwhelmingly helpful and sympathetic everyone in the BVI has been.  New friends put him up; the Virgin Gorda Community has rallied to provide onshore support; the professionalism of the various marine authorities has been exemplary; and Husky and VISAR’s efforts beyond compare. Sadly, an administration error meant that the Black Angel received no insurance compensation.  Patrick himself harbours no bitterness despite the ransacking of his possessions.  “By no means do those individuals represent the good people I have met in these islands.”

As we left that day in the RIB, after hours of hazardous swimming in high seas, we saw three people looking down over the cliff and, as we all looked up at them, they saw us and immediately turned away.  No matter, we had done all we could.