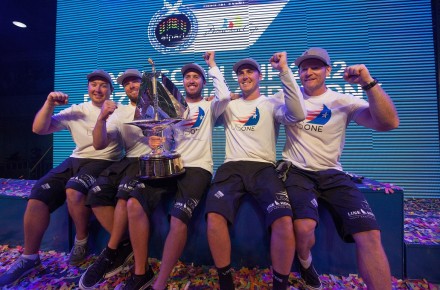 Kuala Terengganu, Malaysia – 8 December, 2012: Wildcard entry Taylor Canfield from the US Virgin Islands has won the most coveted event on the Alpari World Match Racing Tour, the Monsoon Cup, after defeating Kiwi Phil Robertson in a dramatic, sudden death final.

Ian Williams, who claimed his record-equalling fourth ISAF Match Racing World Championship in the Quarter Final, had to settle for third place after defeating Peter Gilmour in the Petit Final.

Canfield – skipper of USone, who also won the penultimate Tour event, the Argo Group Gold Cup, said: “This win is the best we have achieved in our careers so far and the guys I’m sailing with, Hayden Goodrick, Mike Rehe, Dan Morris and Rob Dawson did a fantastic job here today. We’re the second US Virgin Islanders to win this after Peter Holmberg in 2006.

“I’m not sure we could have done any more this year, we’ve been really pleased with how we’ve performed at the three Tour events we were invited to. This is a great way to finish the season and sets the bar for next year.”

Asked if he hopes for a Tour Card in 2013, he added: “We definitely want a Tour Card and if this doesn’t prove [what we can do] I don’t know what does. Whatever happens, we’ll put in a strong effort next year.”

Reflecting on his defeat, Robertson of WAKA Racing, said: “It was a good event for us, despite feeling like we gave that Final away a little bit. We sailed really, really well and we were getting stronger and stronger every race. I think this season we’ve proved what we can do and even though there is a little bit to improve on, we can challenge at these big events. A podium finish on the Tour is a great achievement.”

It was a thrilling final from start to finish, littered with penalties, with both teams going to-to-toe. In the first race, the main drama came right on the finish line. As Canfield approached the line with Robertson pushing him knowing he still had to offset an earlier penalty, Canfield pulled up to try and hook him. In the process, he picked up another penalty but while this was going on Robertson tried to snatch room at the Committee boat which he wasn’t entitled to do and earned a red flag immediate penalty. It was frenetic action, with Canfield eventually managing to take both penalties and cross the line first.

Robertson managed to pull one back in the second race after successfully pushing Canfield over the line early at the pin end. Canfield made a spirited fightback and forced Robertson to defend tack for tack, gybe for gybe but to no avail. 1-1.

The heat was on in the pre-start of the next match, with both teams keen to take the favoured right. Canfield tried to squeeze Robertson out at the Committee boat but Robertson opted to push his bow through the closing gap between Canfield and the Committee boat. It earned him two penalties, the umpires deciding Robertson could have bailed out of such a move. It was a suicidal move, giving Canfield the lead which he maintained to the end.

A comparatively easy win for Robertson in the next race took this final into an epic sudden death encounter. Both skippers put everything on the line in the pre-start, the control swapping sides time and again. Right at the start Robertson made a critical error by opting to tack and try and dip Canfield who bore away. Aimed straight at Canfield, Robertson was forced to dip further which made him tack back at the Committee boat leaving Canfield to lead off the line and open up a two boat length gap. Robertson pressed and pressed, trying to give Canfield his dirty air. A final error by Robertson though allowed Canfield to edge a bigger gap and despite a final roll of the dice from Robertson with a split away, Canfield held on to take a scintillating win.

The Petit Final was, perhaps fittingly, contested by joint ISAF Match Racing World Championship record holders Ian Williams and Peter Gilmour (AUS) YANMAR Racing. Williams has been in fine form all season, finishing in the top three in six of the seven Tour events that his GAC Pindar team has competed in. He continued that form against Gilmour, completing a 2-0 victory to secure third place in the Monsoon Cup.

Ian Williams, said: “We came to the Monsoon Cup to win the World Championship and we got that, which is a great. As far as the Monsoon Cup is concerned, it’s match racing and sometimes things don’t go your way. Still, we enjoyed the event and can be happy with our season.

“I feel like we’ve earned it this year, we’ve been consistently at the top and, against this level of competition, that’s a great testimony to how well this team works together.”

An emotional Peter Gilmour, who now bows out of professional match racing, said: “We really had a good time out here. It was another wonderful event.”

It’s been a defining season on the Alpari World Match Racing Tour and one that looks to have heralded a new generation of world class match racers. As Peter Gilmour bids farewell to the Tour, the likes of Swinton, Canfield and Robertson, who all won events this season, will be back to battle it out at the pinnacle of the sport.

Watch all the highlights from the event here: