Home >> When The Coconuts

…Start to Fly – Don’t wait until too late to find a Hurricane Hole – Perhaps the last few years’ lack of significant hurricane activity has left us blasé; but there seem to be an unusual number of charter yachts plying BVI waters so late in the summer season.   If you were to ask any old hands they would be sure to tell you that some day soon we are due to be hit.   It’s inevitable, just maybe not this year, or so we hope.   For those whose last minute preparations include trying to find some place to hide from an approaching storm, here are a few options. 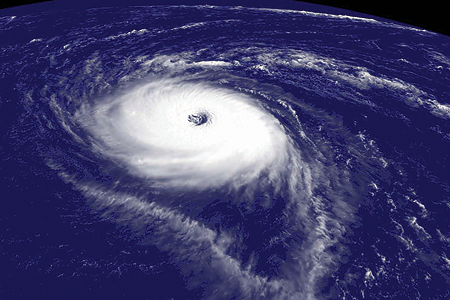 Paraquita Bay is well-known as the region’s premier hurricane hole.   Currently equipped with around 320 moorings, Paraquita is administered by the Marine Association of the BVI and is largely for the use of the association’s members.   Sam Welch, the Marine Association’s chairman, told the Yacht Guide last year that individuals may be eligible for a mooring “if they join the association, and/or purchase a mooring, then they basically can be included in the system.”   The system was established following Hurricane Hugo in 1989 after an assessment by engineers defined the appropriate methods.   The use of this marine protected area is thanks to the BVI Government through the work of the Conservation and Fisheries Department.

“Initially it (moorings) was done,” Mr. Welch told the Yacht Guide, “with the provision of donated ship’s cable from places like Tropical.   Subsequently we’ve replaced it with half-inch chain.   Big strong stuff.”   Changes in yacht style are affecting the availability of space, said Mr. Welch.   “A lot of people want to put catamarans in there rather than monohulls, so we’re incredibly close to topping off the area completely."   At the same time, he said, “yards are providing better facilities ashore.”   The whole idea behind the establishment of Paraquita Bay, said Mr. Welch, “was the Government trying to ensure that the industry was protected.   So there is definitely priority paid to industry members.” If you are intreasted in learing more e-mail: [email protected] or call 284 494-2751. 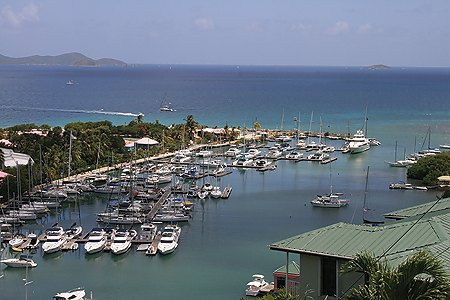 Sparing little effort to provide hurricane protection for its customers, Nanny Cay uses specially designed galvanized steel cradles from UK-based Yacht Leg and Cradle Company.   According to boatyard manager Keith LiGreci, Nanny Cay is “maxing out” already as far as availability.   Most of their customers, he said, were repeat customers “from years and years” back.   The yard can handle about 220-240 boats on the hard, set to within a foot of each other.   Nanny Cay has the option of a cradle system in which heavy-gauge metal cradles are strapped to long screws which are screwed into the ground, and the boat then tethered to the screws.   There are 18 cradles at this time with an additional 10 cradles for the 2008 season offered as an option.   The Travelift can handle yachts up to a 64-ton limit.   Catamarans are limited to a beam of 32 feet.   A one-off fee of $2500 is charged for using the cradle system, including four screws.   Additional screws are available for $100 each.   Storage is $12 per foot for monohulls per month, while catamarans are $19.20 per foot.   Because of the cycle of storms in the past few years, Mr. LiGreci said “I see more boats coming here to the BVI.   The States have been getting hammered and the southern islands have been getting hammered.   It looks like everyone’s starting to come here, though you never know what the weather’s going to do.”   While Nanny Cay still has space available for smaller monohulls (up to 40 feet) there is no more space for catamarans.   At the moment the yard could take maybe 20-30 more boats, Mr LiGreci said.  For more information e-mail: [email protected], Web: www.nannycay.com or call 284 494-2512.

Road Town Marina provides (The Moorings, Village Cay) excellent shelter.  However, the majority of berths are reserved for businesses operating around Wickham’s Cay.  There are some anchorages away from the docks – beware, though, these fill up very quickly indeed. 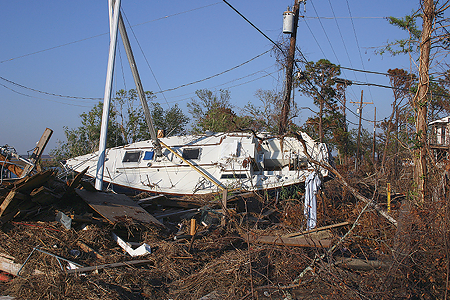 Also well-regarded is the Virgin Gorda Yacht Harbour.   Located at the western end of the island at Spanish Town, the VG Yacht Harbour has space for around 300 boats on the hard.   The process is simple, just make a reservation by faxing a reservation form and complete a payment authorization.   While they prefer you have insurance coverage, they don’t insist upon it.   Masts can stay up though they will unstep if requested.   The general rate for seasonal storage is $10 per foot per month.   There are 42 hurricane pits into which a vessel can be fitted for which the charge is $16 per foot per month with a maximum length of 65 feet.   VGYH also has a provision whereby a boat owner can pay a three-month fee and only bring his boat if there is a high likelihood of a storm striking the area.   Call them at 495-5500.   e-mail the marina at [email protected], or check their Web site at www.vgmarina.biz for additional information.

There are other places to go but these are considered the most reliable.   Whatever actions an owner or manager takes, they should be timely and decisive: waiting until the coconuts start flying is not a clever strategy.