Adrenalin Charged Paradise – It’s no wonder, when you look out from any viewpoint in the BVI, that the majority of leisure time is spent in, on, above or under the crystal clear tropical waters surrounding what is commonly known as The Rock. The BVI, relatively new in every aspect, is much more than the charter sailing capital of the world… it’s an evolutionary arena for watersports in the main, being forged by those that are out there pushing the limits, and it’s access all areas. 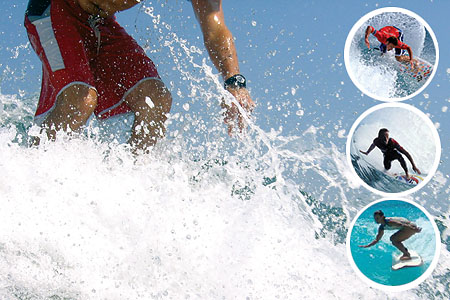 For an Island that follows a long season in terms of tourism, watersports on or off Tortola follows a similar theme.  From October through to April, Atlantic swell rolls on to the North Shore creating waves on three of the most sought after types of surfing breaks; a reef, beach and point break all within a ten mile drive.  Has the surfing gone main stream?  More like the main stream has gone surfing.  Studies show that there are as many people riding the waves now as there were in the surfing boom of the 1960s and world media is naturally capitalising on this.  However, in terms of Tortola, thankfully surfing retains its most simplistic form.  It’s about the board, the rider and the wave and local surfers are purists, following wave rider’s etiquette.  Respect is given to those aware that Tortola does not boast of being a surfing destination; the waves have always been here – but please don’t go shouting about them too loudly.  Most of the BVI surfers would rather their waves be discovered on a personal level than pinpointed – surfing here is about sticking to the old school!

Surfing has evolved, of course, and the board has grown a sail to capture the wind and find speed.  From windsurfing, the evolution has journeyed to kiteboarding, the sail giving rise to a yet more sophisticated method of combining board, wind and speed.   Windsurfing, far from giving way to more adrenalin charged sports, is alive and well and considered an entry level sport to be enjoyed by any ability.   The BVI boasts its champions – world speed record holder Finian Maynard being the man of the moment.  For both windsurfing and kiteboarding, the local pursuit is self governing, finding its way, changing its course to keep up with the world’s ever changing production line.  In essence board sports remain in a constant state of flux in Tortola.  Like other areas, shapes of boards and methods of riding the conditions come and go, futuristic and retro at once, but the wind and waves remain the constants.

In this edition we examine two elements of the evolving board sports arena – the self-governing kiteboarding, and the international adventure of HIHO, one of the world’s biggest windsurfing races. 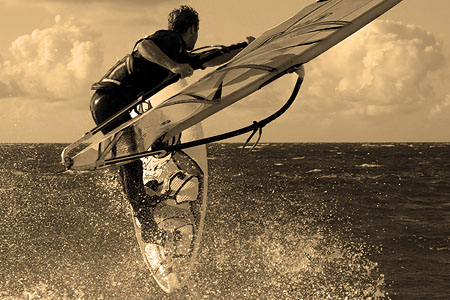 Whilst kiteboarding aims to find its parameters in the safety aspects of a dynamic, fast changing sport, windsurfing finds itself at a plateau, assessing the best way to explore the islands via board; and sail on the most suitable equipment available.  In the past, recognized sporting bodies have offered to stamp their regulations on watersports in the Islands, but those active prefer the freedom of self governance, following older roots and finding their own way.

Under the water, diving, snorkelling and swimming are still some of the most popular pursuits throughout the island chain. There is as much to see (if not more) under the water as opposed to channelling one’s energy on the surface.  There are several reputable diving companies throughout the BVI, all providing excellent equipment, instruction and tours to renowned wrecks and dive sites.  Unlike the seasonal surface sports, diving is offered all year round.

Whatever your game there is so much to enjoy.  Go for it all at once, or try something a little bit different each time you come. Naturally, there are more and more visitors every year to the Island and the surrounding waters.  As I tell people all the time, you are in the right place for a watersports adventure; how fast you want to go is up to you.

In light of the increased influx and the comparative freedom from the watersports regulations, it’s natural to turn one’s thoughts to safety.   The BVI’s beaches are some of the most beautiful in the world, but ironically, they carry some of the most hazardous conditions. Later in this edition we look at the BVI’s fledgling life saving initiative, a long-awaited and gladly welcomed addition to the marine industry – and one of the most important elements to consider when embarking upon your own watersports adventure.