Quiet Contentment on Camanoe – A rental villa offers privacy, seclusion and views. Tucked high above Marina Cay, on Great Camanoe Island, “Rising Sun” is one of the BVI's great beauties.  A four-bedroomed hideaway as private as one could wish, the house is situated in the 2,000-acre Indigo Plantation development which has been a part of Great Camanoe for three decades.   The home, which the owner jocularly describes as being at “Number One, on the Road to Ruin” (on account of the old ruins which lie at the end of the road) is laid out quite simply but effectively to maximise the gorgeous views. 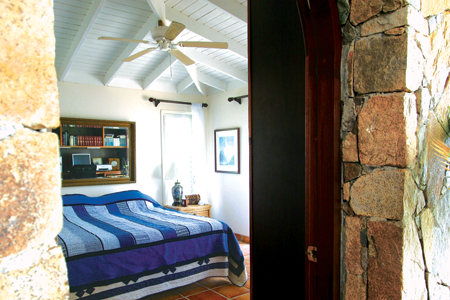 There is no formal entrance way—one steps from a verandah directly into the huge open-plan living area.  To the right, an entertainment area with a long L-shaped couch and a dining area looks out to the balcony and beyond.  To the left of the entrance, a surprisingly spacious open kitchen extends in a fan shape to a large semicircular dining counter tiled in a cool cobalt.  The main exposure is easterly, where a large balcony overlooks a patio replete with both a bubbling spa pool and a deep family-sized plunge pool.  Several hundred feet below lies the Marina Cay complex. 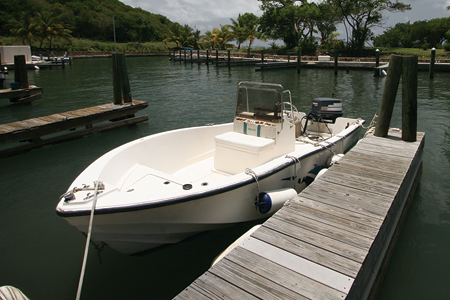 Opposite the main entrance, across the large open-plan living area, is the master bedroom with its own stone interior walls, balcony entrance, walk-through closets and bathroom.  Adjacent to the master bedroom is a smaller den/office which would make a suitable bedroom, as it adjoins the guests' bathroom.  This room has its own westerly facing deck overlooking Little Camanoe and Guana islands. 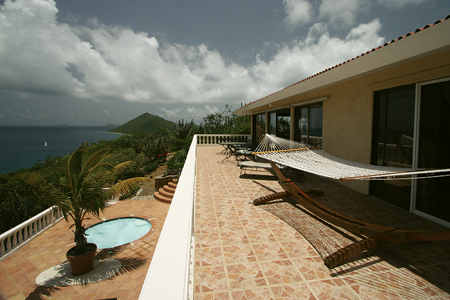 From the east balcony, steps lead down to the pool patio where, directly beneath the living room is a sizeable tiled wet bar, with refrigerator and storage.  Adjacent to the bar is another bedroom, suitable for a teenager or occasional visitor.  While it doesn't have its own attached bathroom, there are a charming open-air shower and toilet nearby, attached to a lovely self-contained suite which occupies its own dwelling at the north end of the pool patio.  On the same level, behind the poolside wet bar, are situated a workshop and storage area, next to the garage.

This simple exposition of rooms (four bedrooms, three-and-a-half baths) and exposures doesn't capture the feel of the house which is, on account of its incomparable setting, airy, elegant and comfortable. This is not so much a showcase as it is a retreat.

The truly special aspect is that access is available by boat only.  The villa comes with its own small runabout which can be left at Trellis Bay, a short five-minute ride from the sheltered private marina that marks the point of entry to Indigo Plantation.

Recent upgrades, including a new roof, make “Rising Sun” as fresh as the new day.  As a vacation option for a large family group or for a gathering of friends who relish peace, quiet and privacy, it is unmatched in the BVI.