Where the Dream Schemes Are – Of all the anchorages in the BVI few match the peculiar magic of Trellis Bay.  Sure, Trellis has its detractors—there's the airport for starters—but for many the mix of attractions as well as proximity to the airport make it easy to love. Charter crews love it because they can pick up guests and get on their way with a minimum of fuss. People watchers love it for the odd glimpses of celebrities en route to Necker Island.  Full-moon fanciers love the antics put on by Jeremy of the Cyber Cafe, and Aragorn, whose art studio ranks as one of the great BVI attractions. 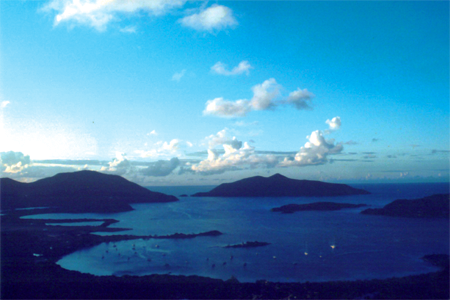 We recently sat down with Aragorn to discuss the state of Trellis Bay and its past, present and future.  The background to our conversation is, of course, the grand plan to build hundreds of condominiums and a golf course and super yacht marina close by on the slopes of Beef Island and in the nearby mangroves.

Speaking of the grand plan, Aragorn said that the planners seemed to be concentrating on the golf course and marina.  “I don't think they're going to mess with the bay too much,” he said. Born and raised in Tortola, Aragorn remembers Trellis Bay from when he was a young boy. “The bay used to be black with sea grass and, of course, there were no boats in the bay then.  In the 1960s and 70s we used to dig clams in the sea grass.

"In fact more was happening here back in the 1950s, because that's when these buildings were originally built, by a Polish guy called Wagner who came out here in the early to mid-50s.  He was way ahead of his time because he had a vision of beach cottage development; he was the one who built the Last Resort, the construction on that.  It was called the Bellamy Cay Club in those days.  He got it all set up for rentals but the tourists aparently never came.

"There was a boat yard here then that was was one of the biggest haul out spots in the Eastern Caribbean.  Big schooners would come up here—there was a lot of shipwright action going on.  That's some of my first memories of all that action going on up at the end where the Government Dock is.  Cog wheels and cables and grease where they would haul out the boats.  There used to be a big boat building scene here, making Tortola sloops and the like—all the forest here is white cedar—there used to be more but now it's coming back, and Beef Island white cedar is really sought after.  It's generally quite a dry island so the wood's slower growing.  We use it for framing Gli-Gli—the Carib canoe—whenever we have to change a frame.

“I kind of grew up here in the Last Resort, they were close family friends.  When I left university I came and rented up here and made a little studio in the bush.  I had a garden and the like.  At that time things were starting to happen here in Trellis Bay.  It was charter boats then and I figured I could make a little money with T-shirts.  These buildings were all just in the bush, neglected; they'd been like that since I was a kid.  And then Jeremy came in and took over the wind-surfing school in the very early 80s.  The Loose Mongoose started as a private house and eventually got turned into the restaurant.

“Up in the bush there's another classic failed development. On the seafront to the west side of the mountain there's an old ruined building. It's breeze block but half-built and completely abandoned.  It was built by this mad priest, I think it was Father Gibson or Father Perigord, and he started a marina or he wanted to start a marina which is a kind of a weird place because it's really shallow and he never knew very much, but he did know that this was what was needed.  He got halfway through building it but the mosquitoes and everything else sent him running.

“There was another guy, Ray Burmeister, I think, who came in about the same time. He had an idea of selling off lots.  There was a sort of joke amongst the ex-pat community about this dodgy salesman trying to come in and sell off scrub bush.  I always remember a sign selling 'Choice Acre Lots’ and there was a picture on the sign of crappy desert land, but he had this vision.  There were all kinds of mad plans then, as there are now, such as a revolving restaurant on top of the mountain and cable cars.

"Inside Hans Creek, which now they are trying to preserve, there were plans for a big lagoon marina and dive operations.  All the dream schemes that you can think of have been plotted for a long time.  This current one is just like that, so we'll see what happens.”

In true BVI fashion, within the laid-back-artist there lives a creative entrepreneur, on full display each full moon. With its fire balls and mocko jumbies, the Trellis Bay Full Moon Party has become a BVI institution.  “When you do something once every month, people are going to come.  The whole thing of it being a family type of vibe fills a niche.  Bomba does his thing and we do ours.  We've got this business association here, which is a good thing.  That's how we raise money for things like the New Years Eve Party.  Everybody helps each other out.  They tried it in Cane Garden Bay but everyone there's so competitive with one another it didn't work.  Here we're all slightly different from each other, so it's OK."

As for the future, Aragorn sees continuity rather than revolution.  “I wish there'd be more artists coming here, that's what it's all about.  I’ve got two potters working with me and a steel worker and Carib people come up regularly through the year.  My whole vision is to keep it being an artist's scene.  There are obviously essentials like supermarkets.  I think the Arts Festival is a brilliant thing for the area because it brings attention as an arts community.  I would hope that more people will come to do art.

"The BVI is funny because it's all tied up with church and work and there's very little relaxed creative culture going on here, whereas if you go down-island, St. Lucia is a really thriving arts and crafts scene, Dominica too, and St. Vincent.  There's a much bigger population base so if you're looking at artists being less than 1% of the population at least you get a few more on the bigger islands.

"One of the hopes for the BVI is the influence on the cultural activities of the down-island people who are here doing all the work. It's a blessing having the down-island people come here even though they're scorned and looked down on by some BVIslanders.  The Virgin Islands does have this magic core, this beautiful little cultural core, but it's like a small club, and it's not very visible.”

The Trellis Bay Arts and Crafts Festival is March 7-12, 2008.  As a showcase for Caribbean artists, this 5-year-old festival is not only a place for artists to display and sell their wares, but a forum and an opportunity for artists to meet one another and share information and techniques. Information is available at:  www.caribbeanartisan.net/newfest.htm