Treasure, booty, jackpot! – Well, we have all been teased by the press and lead by literature to believe that ‘there be treasure in them thar waters!’ As this issue is devoted to the world below the waves, we thought we’d oust that little Island allegory once and for all.Tales of shipwrecks and treasure have certainly played their part in the BVI tourist trade, luring diving enthusiasts (or bounty hunters) in their thousands to the wrecks that rest on the bottom of our clear blue seas.  Whilst the adventure of the trip into the deep alone should be rewarding enough, we would do well to remember that most of the treasure in our well loved Pirate lores was sought after as a dry commodity; it wasn’t the intention to have it sunk, buried, or ultimately misplaced.

If treasure does exist in these Islands, it exists only in myths and legends and the general policy is to let sleeping sea dogs lie. Most associated with the sea life here, though, will have some views on the subject. A sunken treasure would be part of a cargo from, let’s face it, a ship wreck. A boat under distress that could no longer, for whatever reason, cope with the stress of Mother Nature playing with her elements.  It probably sank with the loss of many lives – which makes its cargo rather arbitrary. If there is ‘treasure’ to be had, the costs of retrieving any objects from the wreck are phenomenal and Government restrictions dictate that to indulge in this kind of pursuit, you need an Ocean Research license – something that is granted less than rarely.

Our Islands are steeped in a history rich in Pirate trappings heavily exploited by the tourism industry.  It serves us well; the Islands are richer as a result.  Treasure chests buried in silver sands, though, are really for the romantic; the reality was far more gruesome. The fifteen men on Dead Chest swam off the island and all drowned.  If there was any treasure (an empty rum bottle, perhaps?) it wasn’t worth it.  We asked a few Island hardies what their thoughts were on the possibilities of sunken treasure and they all seemed to share the view that it wasn’t sunken, but all around and the best way to see it is through the lens in your mask.  As you venture into the deep, the experience and wildlife around you is the treasure.  Sunken treasure is obviously a red herring, a ruse to get you down there so you can see the real McCoy; our vibrant, varied, and very abundant but very precious marine life. If anything, the Islands’ marine services are dedicated to avoiding the potential of treasure.  The more brutal lesson from history is that the sea is a dangerous place, and even in this placid calm the journey can be a treacherous one.  We have history to thank for the development and advancement of navigation systems and the emergency services.

Certainly, many of the people whom I regard to have a vested interested in the subject of treasure seem to share a similar view.  Kevin Rowlette, from HUSKY Salvage (an operation that could deal with this enterprise), considered the aspect of hunting treasure as one that “we simply cannot afford to speculate on in any sense.”  Underwater artist, Armando Jenik was also of the opinion that treasure is not mineral but animal and vegetable.  “It’s important to remember that the treasure around these wrecks is the marine life, it grows very quickly, but it can just as rapidly be destroyed.”

Armando opines that Tortola’s harbours’, or indeed any harbours’ for that matter, wrecks are “a fantastic reflection of an Islands’ history.”  In the USVI, St Thomas’ harbours are also filled with a large number of wrecks.  Tortola’s prosperous relationship with trading ships stopped in the late 1800s, but up to that time visiting ships were plentiful.  Negotiating the reefs and atolls that make up the British Virgin Islands without modern navigation systems is not easy and many vessels met their end in the Anegada Passage.  As ships ran aground on the reefs, the waves would roll them, breaking them up and scattering their treasures across acres of coral.  Fast growing coral would cover the debris in no time.  Sadly, some of the less scrupulous bounty hunters of today feel the need to blow the coral up to reclaim the treasure.  “That’s an absolutely ridiculous idea,” concludes Armando.  And the reason is really quite obvious. 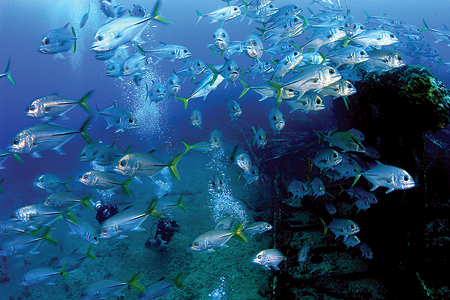 And still people come to the Islands looking for an historic prize from the deep. Armando bought his first few cameras by trading an 18th Century bottle collection for Nikons.  Since then, his passion has been for the living treasure found in the oceans, and he captures this through his lenses.

His story prompts me to recall the story of the Murphy brothers’ attempts to salvage HMS Rhone in the 1890s.  HMS Rhone is perhaps the BVI’s most famous wreck, sunk in a ferocious hurricane in 1867.  The brothers were commissioned by the Danish Government to retrieve artefacts; and the story goes that the third brother decided to keep the her bell as a memento and it now mysteriously hangs in the St George’s Anglican Church, Grand Turk.

Therein lies the moral of the story.  Artefacts retrieved from the deep may well have a commercial value, but it seems to me that like most treasures, the act of pursuing them and the tales of how they came to be are far bigger bounty than the artefacts themselves.  There is treasure for all of us out there in the water, and we probably come across it every day.