Home >> The spark that blew it all

The spark that blew it all 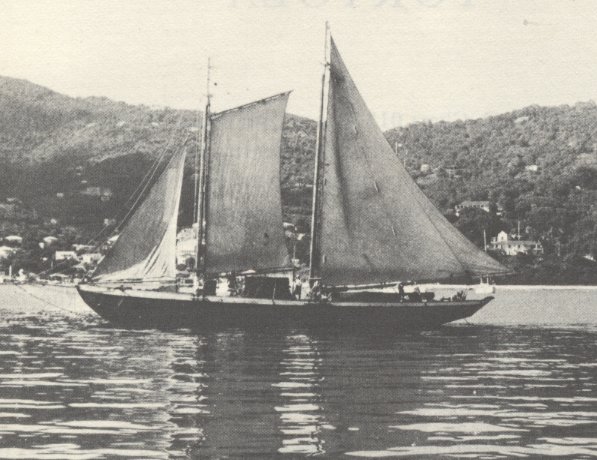 This is the story of a locally built schooner and her abrupt, dramatic end.

The Catherine was a beautiful trading schooner built of wood in Road Town by expert shipwright Leopold Smith. Leopold was the son of the prolific West End boat builder Daniel Smith and father to Ira Smith founder of today’s Smith’s Ferry Services.

The Catherine was launched on April 12, 1949 from the ghut in McNamara where the Lion’s Club Park is now located. She was 63ft in length and an outstanding example of the talents and expertise of her builder. Leopold built her for his own use and owned her with two other partners. She was active in local trading for five years and then sold to Robinson O’Neal of Virgin Gorda.

Robinson O’Neal added an engine and renamed her Maris. As the Maris, she continued to ply the waters of the Virgin Islands making regular trips from Virgin Gorda to St. Thomas, San Juan, Puerto Rico and back. It was on one of these trips to Puerto Rico, that she met an untimely end five years later.

It had been a routine passage from Virgin Gorda to San Juan and the Maris docked at pier 5. She reached in the evening and after a quiet night, spent the whole of the next day unloading and loading cargo. The crew consisted of the Captain Winston O’Neal, brother to owner Robinson, a first mate, engineer, and five crew. There were also two other passengers—a man from Anegada and another from St. Thomas—bringing the total to 10 people.

After unloading the various items brought from Virgin Gorda, the crew began loading the supplies for the trip back. The majority of the return cargo consisted of over 150 large propane tanks full of gas. As the crewmen struggled to place this heavy burden aboard, the engineer worked with a local mechanic who was making some repairs to the diesel engine.

Captain Winston O’Neal was at the far end of the dock conferring with his brother, owner Robinson, who had piloted a small plane from his headquarters in St. Thomas to San Juan to meet the boat, as was his habit. The two passengers had been shopping and were bringing their personal items aboard.

Now the crew consisted of five young men from Virgin Gorda. They were all around 19 years old and were under the supervision of the first mate, who was older—well into his 20’s—and a native of Anguilla. As the last of the gas bottles were being placed on board, the young crew members expressed their concern with how they were being stored. It seems that many of them were stacked in a horizontal position, instead of upright and some actually had the top with the regulator leaning down.

When they complained to the First Mate, saying that they thought they could smell gas, the bottles were put down and the crew were reminded that they had stacked bottles this way many times before:  “What’s wrong with you all? Are you afraid of death?” was the remark made.

With that said, the matter was closed and everyone continued to prepare the vessel to leave port. It was 3pm on Friday January 9, 1959. The local mechanic had left and the ships engineer was below, ready to start the engine. The crew and passengers were situated in various places on deck and one was on the dock to throw off the mooring lines.

‘Robbie’ O’Neal and his brother Captain Winston were finishing up business at the far end of the pier.  When the local mechanic began working on the engine earlier in the day he had disconnected the battery cables. These were reconnected when he finished, but in his haste to leave, he had not tightened them properly.

As the Engineer turned on the ignition key, the loose battery cable was made to arc which created a spark and an incredible explosion which lifted the deck in one piece into the air while forcing the hull underwater.

Windows were broken across the bay in office buildings in San Juan and Carolina and the sound of the explosion was heard as far as 35 miles away. Incredibly, there was only one fatality. It was that of the First Mate who had admonished the younger men for being afraid.

Every other crew member sustained injury for which they bear the scars today except two, the Captain and the crewman who were on the dock. The engineer was burned badly and marked for life. The others were mostly blown into the air and either landed on the dock or in the water. They received broken feet, legs, and arms and many still limp from the injury.

For most of the injured, it meant almost a year in the hospital recovering and in some cases longer. They began their recovery in San Juan and then transferred to St. Thomas before returning to their homes in Virgin Gorda. For some, it took years before they returned to a life working at sea. For one, he never returned and stayed employed on land and to this day will not allow propane to be used in his home.

The strangest thing is the fate of the engineer, for as the others were left with physical evidence of their ordeal, he was thrown straight up into the air and landed back down exactly where he had been sitting with no evidence of a broken bone or injury outside of the fact that he was dead.

I will leave it to you to draw your own conclusion as I have related this story as told to me by the survivors – for me, it only reinforces the adage that truth is stranger than fiction.