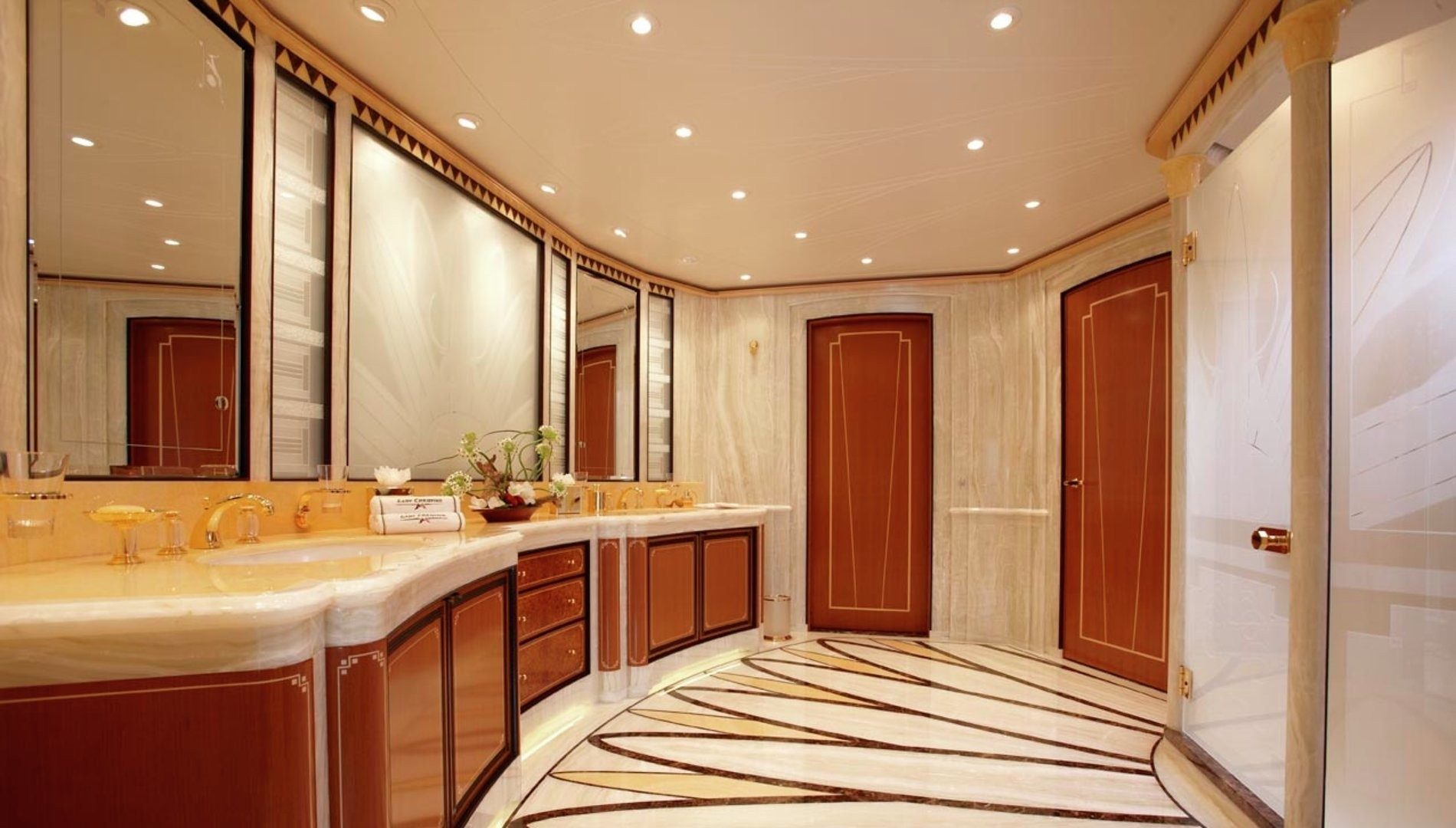 The owner’s bathroom on Feadship’s Lady Christine is an opulent sight to behold: the walls, floors and counters are lined with cream and yellow onyx, the vanity has curved, inlaid cherry cabinet doors and the mirrors are interspersed with engraved glass panels with silver mirrored backing, all of which combine to create an image of luxury that is bold, ornate and one of a kind.  And as of Feb. 1st, it can all be yours, along with the rest of the 68-metre motorized superyacht, for a cool $69 million.

The nine-year-old vessel – ranked as having one of the best bathrooms of any superyacht in the world by Boat International – epitomises an interior design trend in the superyacht world: luxury maxed out to incomprehensible levels, but customised with individual flourishes that reflect the unique tastes of whatever billionaire owner is behind the wheel.

Compare the ornate bathrooms on the Lady Christine, for example, with the more rustic – but equally luxurious – offerings onboard the Phinisi-style charter yacht Dunia Baru. The sailing yacht has a master suite bathroom that’s bedecked in fine-quality, Borneo-sourced wood on the floors, walls, and matching vanities, and it comes equipped with an oversized “rainforest” shower to match its understated, spa-like feel. The Indonesia-based Dunia Baru is currently open for chartering – for $94,500 weekly. 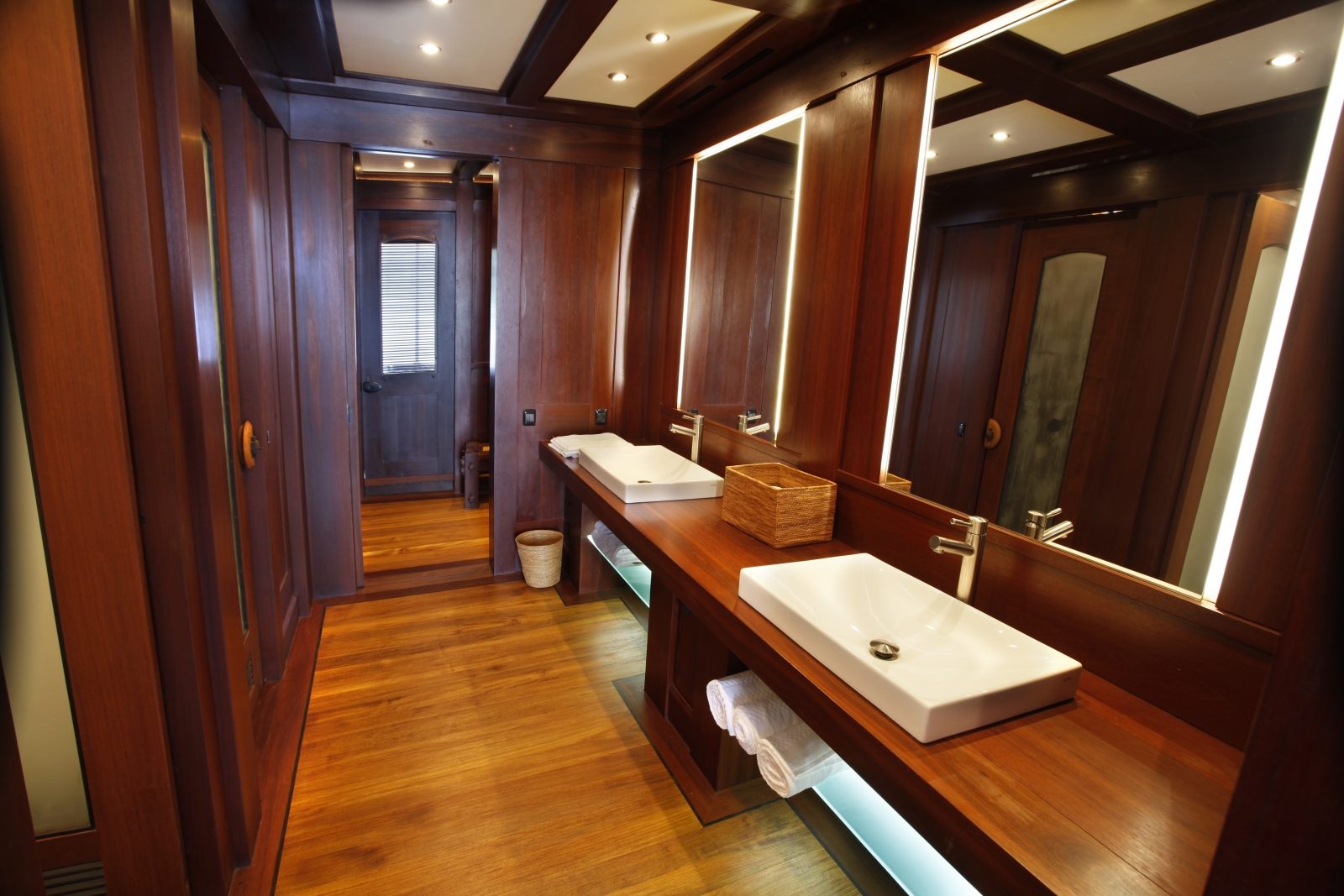 Yacht companies that have recently won awards for their world-class interiors also point to their ritzy bathrooms – with a wide range of design choices – as evidence of their extravagance. Cantiere delle March’s 33 metre Nauta Air Mimì la Sardine – winner of the “Best Interior Design, Motor Yachts below 299 GT” prize at the 2019 Boat International Design and Innovation Awards – advertises the Bianco Galizia granite lining the walls of each of its bathrooms.

Overmarine’s 54-metre El Leon – winner of the “Best Interior Design, Motor Yachts between 300 GT and 499 GT – has an infinity pool with a glass floor that serves as a skylight for the bathroom in the owner’s cabin. It’s one of a handful of features that interior designer Alberto Mancini told Barche Magazine “best bring out the Mediterranean spirit” of the Italian vessel.

Abeking & Rasmussen’s 74.5-metre Elandess – winner of the prizes for “Best Interior Design, Motor Yachts 500 GT and above,” “Best General Arrangement & Deck Design,” and “Best Lifestyle Feature Design” – is renowned for its art collection and unique furniture. The vessel’s bathrooms play on that theme – highlighting art rather than lavishness – with yellow-and-black mosaic tiles lining the walls for an elegant but understated aesthetic. 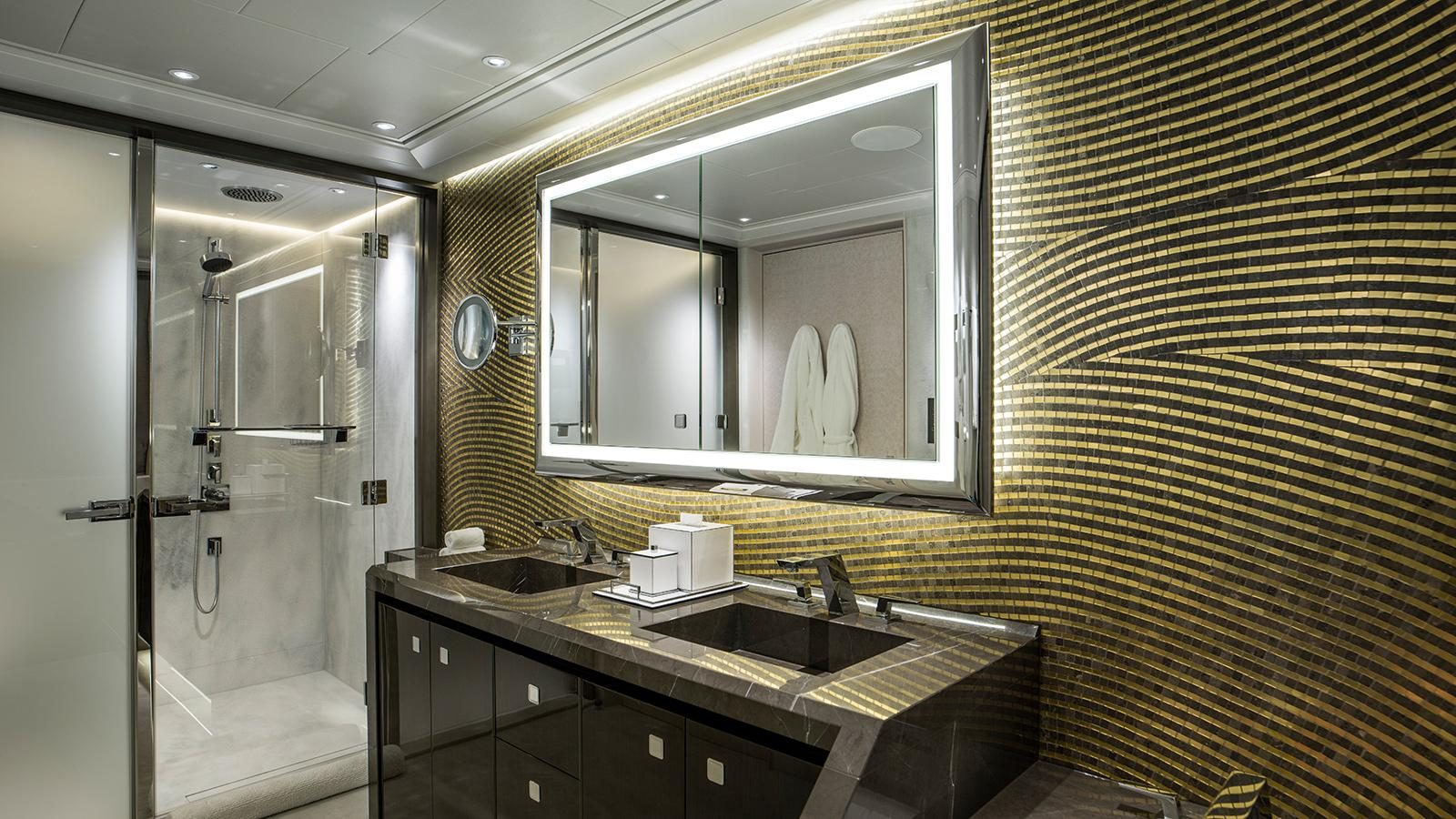 Ferretti’s Custom Line 38.4 metre Vista Blue won “Best New Production Yacht Design” at the BIDI Awards, and if that victory is any indication, bigger will be better in terms of designing bathrooms on superyachts in the future. Vista Blue’s owner’s suite is 35 square metres in size and comes with a full-beam bathroom and separate dressing area, according to Superyacht Times, which named it the “Superyacht of the Week” last July.

Some yacht builders have even managed to gain renown based off the sheer extravagance of some of their bathroom features. Boat International opined that the CRN-built Saramour, a 46-metre yacht built in 2014, had the best superyacht shower in the business – a centrally located unit entirely enclosed in glass and entered through a pivot door. The yachting magazine also noted that Feadship’s 44.6 metre Lady May had the industry’s best guest bathroom, which reportedly stretches across the beam of the yacht and makes good use of glass and mirrors to make its already unusually large size seem even bigger.

Like the Lady Christine, the Lady May is also available – and it even saw a price reduction in March. You can now enjoy its full-beam, white-walled guest bathroom for bargain-bin price of about $28 million.