We’ve all seen the competition between our two telecoms lately, but nothing like the close racing between bMobile and MIO in this first JEWELS IC24 Friday Night Series. 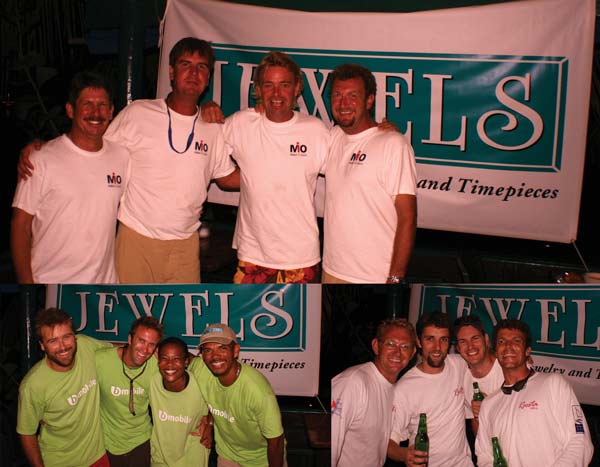 It was a close race from the beginning as bMobile took the lead on the first day just one point ahead of the competing MIO boat.  Andrew Waters caught up the next Friday to take back the lead in turn by just one point.  On the 3rd and last Friday, IC24 Class President Colin Rathbun’s bMobile crew came back to even the scores and everything was to be played for in the last race as the 2 boats came in at a tie before the last race.  All the boats were slow on the start line after a congested approach but MIO managed to get a little edge.  Once in front all they had to do to keep the bMobile team behind them was cover every move and it paid off in the end.

Placing third in the JEWELS series not far behind was Steve Roose’ Roosta, with a great performance keeping in front of the renowned Hirst brothers who for the first time in a while did not show on the podium.

Everyone came out winning something in the end as JEWELS’ representative Tricia Homer handed over many generous prizes. The First Place prize was a Swiss Army Maverick II His and Hers Set of Watches which went to Andrew Waters.  Second Prize was the choice of an elegant Men’s or Women’s Tissot timepiece to Colin Rathbun’s bMobile team and Third Prize was a Citizen Chronograph Watch given to Steve Roose.

IC24 racing occurs regularly each week.  Summer times are Friday at 5pm with a 5:30 start.  Anyone interested in learning to race is welcome to come by for an introduction as the fleet is always looking for more crew even if you have little or no sailing experience.  Just show up by the fuel dock a little before 5pm to go racing.  Get more info on sailing IC24s at  www.ic24.org.

The above-mentioned prizes are available to anyone for purchase at JEWELS.  JEWELS is located in Wickhams Cay, across from the cruise ship dock and upstairs of Ample Hamper and on the web at www.jewelsonline.com.