THE SWEETEST THING – Anyone with a modicum of historical knowledge will know that the BVI, indeed the whole of the Caribbean, was once dotted with flat topped, conical mill buildings – quintessential features of the sugar plantations of the 17th and 18th Centuries. Today these architectural relics are few and far between, and of those that remain standing, fewer serve any purpose other than to remind us of our heritage. So when news of an idea for a new home, a reconstructed sugar mill with its internal space redesigned for modern living, reached the ears of BVI property aficionados, there was much excitement. 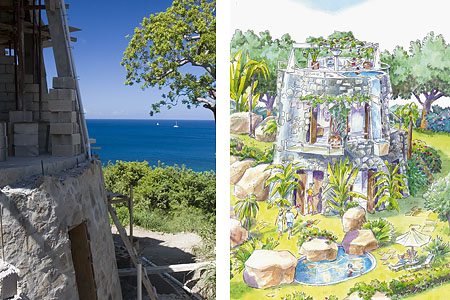 When the BVIPG was first asked to review the plans for this fantasy construction two years ago, the project was still in the planning stage. David Thrasher, a BVI-based artist of considerable repute, had turned the blue prints into colourful, two dimensional depictions of luxurious whimsy which helped raise the excitement levels further still.

You can then, imagine my own anticipation when I was invited back to view the works in progress.  When I had first visited Lot 37 on the Nail Bay Luxury Community Resort, there had been little to do except climb up one of those infamous Virgin Gorda boulders and marvel at the magnificent vista set out in front of me – the Dogs, Tortola, Peter Island and stretching out far into the distance, St. John.  Sailing boats drifted past, stark white against the cloudless, cyan sky; the sun dazzled and danced across the indigo sea and birds twittered contentedly in the lush green foliage and mature trees that covered the 0.69 acre site.

The site is just one plot away from the delights of Nail Bay itself – golden sands, crystal clear waters and superb snorkelling; and there are plans afoot to cut a path directly down to the beach, thus avoiding a more circuitous route via the road.  More significantly, though, and the main inspiration behind the sugar mill concept, the site quite literally backs on to the historic Nail Bay sugar mill ruins.  “We were doing a site analysis and were discussing the ideas for the houses. I hoped to pick up some of the forms of the landscape, including the boulders and the ruins,” Tim Peck, chief architect at OBM International BVI, had informed me.  “A portion of the plot is a slightly odd shape – truncated and steep at one end, and we had to think about how best we could utilize this space to achieve the amount of accommodation needed without affecting the construction of a main house in the future.  A house in the form of a mill, clad in local stone, fitted the bill perfectly.”
Taking Shape

On this recent visit, I arrived in Virgin Gorda on one of those peerless days that makes one feel that there really is no better place to be than in the BVI.  I always feel Virgin Gorda to be a little different in its beauty from Tortola.  Of course, it’s not as developed, but the air smells different, and the colours of the scrub, the sea and the sky seem so much more intense.

There has been much activity at Nail Bay in the last two years – the infrastructure project is now complete, and every home has underground electricity with generator back up and a new water supply.  High speed Internet is on the cards for the near future.  All secondary roads sport a new layer of paving, and by the time you read this, the public road to Nail Bay will have been graded and paved, too.  Nail Bay Luxury Community Development can now wear its Luxury label with dignity.  And the Sugar Mill House..?

Well, here too, a fantastic vision is fast becoming a reality.  The stone clad, buttressed walls are up, the rooftop pool is in place, and the rooms are certainly on their way.  Even in this semi-built state, one can see exactly what David Thrasher saw.  To be furnished in a traditional but opulent customized style, the structure comprises two units, offering two separate one bedroom apartments or a two bedroom dwelling.  The round sleeping area sits at the centre of each floor, positioned so that one can lounge in bed and watch the world drift by.  The living area encircles the sleeping area, and incorporates storage, the kitchen and a shower room (the shower walls will contain glass doors – a novel take on the in-vogue outside abluting).  Adjoining the sleeping area will be a space customized for personal relaxation, or, heaven forbid, working if necessary.  The ground and first floors will be connected by a covered stairwell running up the back of the mill, which in turn becomes an open route to the piece de resistance, the roof garden.

The whole of the rooftop, with its incredible 360 degree panorama, is dedicated to outdoor entertaining, with a pergola covered wet bar and barbecue, patio flooring and…an infinity edge plunge pool that will occupy a quarter of the space.  The overflow of this pool will be channelled into a waterfall cascading down the side of the mill all the way to the ground floor.  And you will see this waterfall from the comfort of your bed as, in an act of frivolity, round windows have been sunk into the waterfall channel.  What if it rains though?  Well, fear not because not a single space has been wasted – the basement provides a large family room with a billiards table, and temperature controlled wine cellar.  Just in case the roof top gets a little congested, there is a ground level pool and patio, too.

The fantastical Sugar Mill House is meant merely to be the guest house to a much larger main house occupying a more amenable space further down the slope, plans for which are available should the new owners wish to save time on decisions and new draughts.  At Nail Bay, home ownership allows the focus to be on luxury in a 146 acre Master Planned community, and of course, ownership also means access to all resort amenities including the spa, restaurant and floodlit tennis court.  This flight of the imagination can be yours for just $998,500.