Home >> STATE OF THE MARKET

STATE OF THE MARKET

Scrub Island: – Chief Minister Dr. the Honourable Orlando Smith visited Scrub Island on 22nd March to view progress on the BVI’s first five star resort, marina and luxury community complex, which is due to open its doors in December 2007.

In a statement given to the workers, developers, public and members of the press, the Chief Minister fully endorsed the development, stating “It’s a project we’ve supported.  As long as we stay on top of the project, I expect it to be good for the BVI in terms of employment and tourism.”

At the same meeting, Jonathan McCarthy of VIPM, project managers for the development confirmed that the relocation of the reef to incorporate the mega yacht marina was now complete.
Source: BVI Beacon, 29th March, 2007.

East End:
Residents and developers of Tortola’s East End will be delighted to know that their waste issues will come up smelling of roses as the Director of Water and Sewerage, Julian Willock affirms the East End/Long Look Sewerage Project will be completed by the end of November 2007.  The new system will benefit homes, apartment buildings and businesses, pumping sewerage to a wastewater treatment facility in Paraquita Bay.
Source: BVI Beacon, 14th March, 2007. 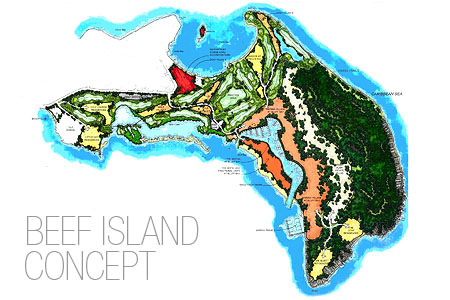 West End:
The Water and Sewerage Department is advising its customers in the areas of McNamara, West End and Frenchman’s Cay (especially in the high elevations), that due to major leakage at the  Hannah Hill Reservoir, the reservoir will be out of service for about three (3) months from April – June, 2007 to facilitate the installation of a new reservoir.

The department is encouraging its customers within these areas to start filling up their cisterns now before the work commences after the Easter Holidays. The services of the Water and Sewerage Department’s delivery truck are available to customers whose cisterns are depleted during the three (3) month period.  Please contact the department to arrange such delivery if desired.

The department apologizes for the inconvenience and thanks you for your cooperation and understanding as they continue in their efforts to better serve you.  For more information, contact the department at 494-3416
Source: GIS Bulletin, 4th April 2007.