DONT CRY WOLF! – Recently, we were sailing off Beef Island when we heard the following message on the VHF: “Mayday, Mayday! We’re on the reef! We’re sinking!” No boat name. No location. The voice came on again and we were able to ask for a boat name and location. They were on the reef just south of Marina Cay. Were their sails up or down? “Sails are down,” the woman’s voice said.

Soon other voices were heard and a fellow boat announced it was on its way to effect a rescue. We scanned the area with the bins but could see no boat with its sails down—though there was one very close in to the reef by Marina Cay with mainsail proudly hoist and trimmed. The wind was still mostly southerly so the boat was being pressed up on the reef. There was barely a swell; things could have been worse.

By the time we took a mooring the stranded boat had been manoeuvred off its perch and was being driven in to the Marina Cay mooring field by a charter company employee who was on the rescue boat. The vessel so recently in “grave and imminent danger” seemed pretty fine to us.

Soon we heard a worried voice break into the VHF traffic to ask how the endangered sailors were doing. The same female voice from earlier was heard to say, “Oh, everything’s great.” We were amazed to hear somebody go from a Mayday situation to an Everything’s Great in the space of perhaps 30 minutes.

The ensuing discussion on our boat covered such topics as “What would have happened if the Mayday call came around nightfall or during a rain squall, in low visibility?” (VISAR alerted, various innocents put at risk.) “What should the appropriate call have been?” (Pan-pan? Or was the Mayday appropriate, given the crew’s apparent belief that the boat was sinking? Should the crew have waited to see a gaping hole in the hull before changing their call from Pan-pan to Mayday?). In this case, the call came through on VHF Ch 9, the channel being used by a group of boats sailing together. Had it been Ch 16, who knows what might have happened?

It’s easy to scoff at another’s perceived mistakes, but what would you have done (other than looked at the charts and paid attention to the depth sounder)? At the very least, we decided that the mainsail should have come down. A short course in radio etiquette got a couple of votes, too.

The real lesson, though, is that fear distorts perception; the antidote to fear is practice and preparation. Practise getting the sails down quickly, making radio calls, or dropping the anchor at short notice. Prepare by knowing where you are and the possible dangers in the vicinity. That way when things do get a bit raggedy, there’s always a Plan B. 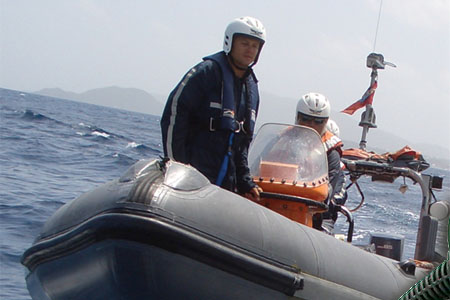 PAN-PAN or MAYDAY? – A call of pan-pan means that there is an emergency on board a boat, ship, aircraft or other vehicle but that, for the time being at least, there is no immediate danger to anyone’s life or to the vessel itself. This is distinct from a Mayday call, which means that there is imminent danger to life or to the continued viability of the vessel itself. Thus ‘pan-pan’ will inform potential rescuers (including emergency services and other craft in the area) that a safety problem exists whereas ‘mayday’ will call upon them to drop all other activities and immediately instigate a rescue attempt.
Source: Wikipedia