Please Don't Wrap It – Some things are inevitable in the sailing life.  If you’ve never yet gone aground, don’t worry, you will someday. If you’ve never dragged anchor, don’t worry, you will someday.  And if you’ve never wrapped a dinghy line or a dockline around your propeller shaft, don’t worry, that’ll happen too.    And it will happen at the worst possible time.  Most often when you’re manoeuvring close to a mooring ball or attempting to avoid some obstacle, such as a swimmer or a reef or similar underwater impediment.  Most often it will happen as soon as you engage reverse propulsion, the line being sucked inexorably into the spinning prop. 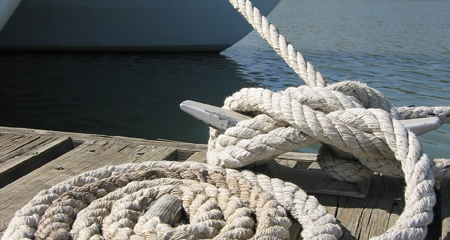 Your first indication that’s something’s amiss will probably be the sudden shutdown of an engine as the stress loads stall it out.  Don’t try to re-start your engine.  You have a problem, OK?  Don’t make it worse.  Your first action should be to secure the vessel.  Try to make fast to the mooring ball or drop anchor, if that’s an option.  In a catamaran it’s fairly easy to manoeuvre with a single engine.  In a monohull you may need to get a sail up, or more likely, to have a crew member jump into the dinghy and use it as a tug to push from the stern while the helm directs the boat to the mooring ball.  If there is no mooring ball close by and there’s a danger of running up on a reef or a rock, use the dinghy to hold the boat in position.  You can even make the dinghy fast to the stern quarter with lines from the dinghy bow and stern to use the dinghy’s motor to propel the mother ship.  Even a 10HP outboard will provide enough push, in fairly calm conditions, to move a 40- or 50-foot boat.  Don’t try to steer with the outboard.  Centre the dinghy’s tiller and steer with the mother ship’s rudder.

When the vessel is secure, shift the transmission to neutral and try to start the engine.  Check for leaking oil or other fluids.  Most likely there will be minimal damage to the prop shaft, seals, etc.  If you’ve wrapped a line while you’ve been motoring at speed you may have damaged an engine mount, so it’s imperative that you inspect the engine, its mounts, the propeller shaft and cutless bearing for any damage or water ingress.  You can generally remove the wrapped line easily unless it has been jammed tight.  You may have to cut the line free with a knife.  When the line is completely removed, try starting the engine and engaging the transmission.  Generally, there’s no damage and you’re good to go.  If you hear any unfamiliar sounds, such as banging or knocking, shut down the engine and call the charter company.  Don’t try to hide the incident from them.  They will probably take note of the chewed-up dinghy painter and make the appropriate conclusions (if not deductions!)

Your best cure to this problem, as with all others, is prevention.  The skipper should appoint a crew member as the dinghy boss, to make sure the dinghy is tied off on a short painter any time the vessel is approaching a mooring, attempting to anchor, or coming alongside a dock.  Crew members should also be trained to watch for lines trailing over the side.  I’ve seen dock lines, roller-furling lines, halyards, dinghy painters, fender lines, lobster trap lines and even stray bits of rope floating in the water get caught up in the wash.  Above all, the helm must be vigilant—the consequences of losing control of a vessel in tight quarters can be extreme.