LET'S GET SYROS – A couple of weeks ago we had the pleasure of sailing the new Beneteau 43.3 in local waters. Twenty-five knots of breeze, two reefs in the main, full genoa, and the yacht sailed as steady as a train up the Sir Francis Drake Channel. We were sailing conservatively, just two aboard and only one of those competent to any degree. Earlier we had sailed her off a mooring in the Bight under mainsail alone, the helmsman controlling the mainsheet as he jibed through the fairly empty mooring field. The fact that a yacht substantially larger than 40 feet could be sailed like a 25-footer was a surprise and a pleasure. 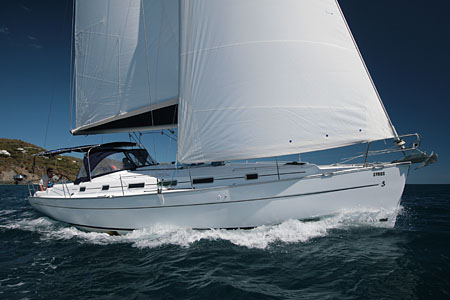 Later, we got to sail a sister ship, Syros, in much gentler breezes but with the same ease of operation and pleasure in the performance. This test yacht, which is on offer at B.V.I. Yacht Charters, is one of the newest range of Beneteau Cyclades series, from the design firm of Berret-Racoupeau whose distinctive approach to design has been described by Beneteau as “clean, simple, and balanced, minimalist in such a way as to be perfect.”

Clean and simple the boat surely is, with everything laid out sensibly and close to hand. Winches for halyards, vang, and reefing lines are arrayed atop the coachroof either side of the companionway, while the sheet winches are close to the steering positions (there are 2 wheels) allowing the helmsman to ease a sheet when necessary. All lines can be controlled from the cockpit, although the coachroof and side decks are wide and kept flat so as to make movement around the boat safe and easy, allowing crew to work comfortably at the mast. 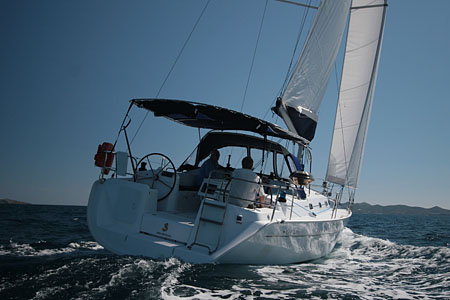 With a beam of 15 feet on a length of 43 feet, the 43.3 is well within normal parameters, though the beam is brought quite full most of the way back to the stern, which allows for a pair of roomy aft cabins and some sparkling performance off the wind. Cockpit lockers are well sized but not very deep, to allow for the aft cabins, yet they will hold several fenders/bumpers and the usual complement of gear. The boat was equipped for charter mode when we picked it up at the BVI Yacht Charters docks and there was still plenty of room for dive gear or other equipment, such as fishing rods.

It is below decks where the yacht really sparkles—3 full cabins, all with their own head/shower stall and decent storage space adjoin an immense dining/common area. The galley is arranged along the port hull and is equipped with a sizable 12-volt powered fridge/freezer combination. The dining table is large enough for the whole gang plus a straggler or two. This table converts easily into a large double berth for the extra guests. 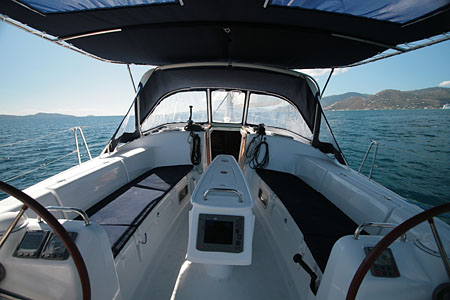 But it is in the small (and not so small) details that Syros shines. The electrical panel has been reduced to just a few breakers, while the gauges for batteries, water tanks and fuel tanks are all easily read and understood. The best feature, for many sailors, will be the holding tank/heads arrangement. On this boat the toilet pumps directly into the holding tank, which in turn drains through a very large diameter outlet hose to a through-hull which is opened and closed by way of a simple valve. There are no Y-valves to confuse the operator—just open or close the seacock as required. It’s such a simple system somebody might actually use it.

It is that last feature that brings this model of Beneteau clearly into a class of its own—along with a stunning innovation, the salon light switch is placed cleverly at the very top of the companionway steps, at head height when one is standing in the salon. That feature alone is awe-inspiring. No more fossicking about behind the foul weather gear looking for a light switch. Ergonomics goes to sea! 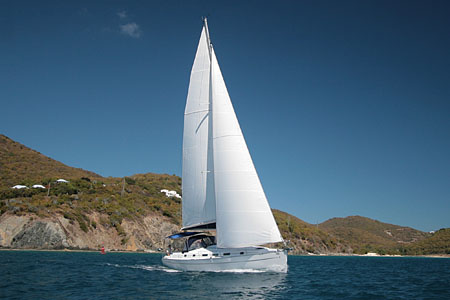 The emphasis on the small details is simply to indicate just how well thought-out this boat really is. Not only have the designers got the big things right but they have applied some fresh thinking to what is now a mid-range cruising boat to make it truly appealing both under way and on a mooring. Even better on a slip, too, since there is shoreside air conditioning to absorb the some of the heat.