High Seas Bounty – There’s an old mariner’s lore that suggests that the finder of any vessel abandoned at sea or on the seashore can claim salvage rights; in essence, ownership of the said vessel. The romantics amongst us often dream of coming across a luxury yacht, abandoned yet intact, claiming it as our own and sailing off into the Caribbean sunset. Kevin Rowlette, together with his wife Becky, operate HUSKY, a salvage operation in the BVI. They are actually listed as commercial marine assistance – and their work is far more in keeping with this definition than the images of hauling rusty wrecks from the seabed for scrap the term ‘salvage’ seems to conjure up.  HUSKY’s equipment and operational procedures can actually prevent the vessel from sinking, and their particular brand of salvage means returning the vessel to the owner in as sound a condition as possible. It’s not an easy feat, and no job is the same. Salvage is but one aspect of the HUSKY business venture.  More often than not their assistance is lent to vessels in distress.

Boats may, through simple human error, find themselves scuppered on reefs or sandbars, or in a situation where moving just isn’t an option because it would jeopardise the safety of the passengers.  Left to the elements, the boat owner is likely to suffer significant financial loss and even be held accountable for loss of life. In instances like this, HUSKY is right up there with the emergency services that are called upon to help with the rescue efforts.  Kevin was one of the founding members of VISAR, and still works closely with the BVI’s premier volunteer Search and Rescue service. 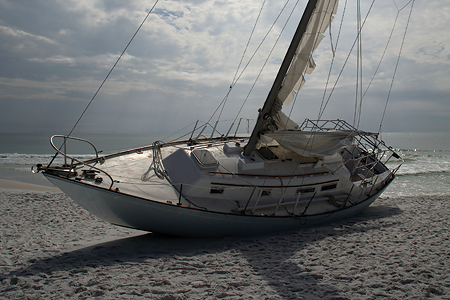 “Our operations,” Kevin Rowlette says, “Are a win-win scenario…the boats are salvaged, the environment is protected to the greatest extent, and the insurance companies foot the bill.  Our fees are performance related, meaning we have to be quick, efficient and have to protect as much of the environment and the vessel as possible. In the past boats were more robust; with today’s lighter technology and a faster production line we have noticed boats will break up on reefs far faster than they used to.  This means we have to get there quicker to ensure as little damage to both boat and the reef as is feasibly possible.”

I’m standing on the deck of the tug Lakota chatting with Kevin.  This is actually the Rowlette family home, but Lakota is also capable of towing up to 20,000 tonnes.  Her former life was as a barge tug, pulling 200 feet long floating beds of steel.  HUSKY uses a variety of commercial marine tools and boats to fulfil its salvage and rescue operations, from cranes, to airbags and crash pumps, and the evidence is neatly stacked around the decks of the company vessels.  The HUSKY goal is always the same, whatever the job: get the boat up, back to base and on to land for a concise damage assessment report.

Kevin has spent more than 20 years of his life in the business, and has been through his fair share of Caribbean hurricanes – a phenomenon that obviously means they can’t sit at home and twiddle their thumbs.

Although it’s hard to say what the next job will be, the HUSKY team are looking forward to retrieving Windjammer Cruise’s tall ship vessel Flying Cloud from Trinidad.  Flying Cloud will be sunk in BVI waters primarily to provide a new dive site but also to provide a new habitat for our wonderful reef fauna.  The BVI Yacht Guide will be covering this event for our November edition.  Kevin says “It’s a project we have been involved in for a while, and it’s all coming together.  It really is an exciting prospect.” I am reminded, in a sense, of the A team out on the water getting the job done.