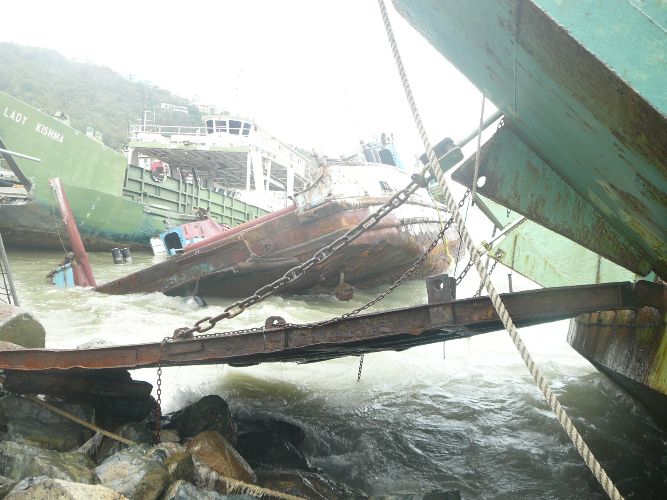 IT ONLY TAKES ONE…

…So goes the mantra of the professional weather forecasters at The Weather Channel and elsewhere, as well as the amateurs at the yacht club bar, whenever the subject of hurricanes is discussed. No matter if the storm forecasts number in the single digits or into the high teens, location and luck seem to be the deciding factors every year.

So, what can a prudent boat owner do to protect their vessel from a pounding by the elements?

The first step is to arrange for a secure place to store the boat in the case of emergency. Many owners, of course, pull their boats from the water and leave them high-and-dry for all or some of the hurricane season. Those whose boats work for a living need a secure place to run to.

Popular land-based solutions include the yards at Virgin Gorda Yacht Harbour, Tortola Yacht Services at Wickham’s Cay II, and the yard at Nanny Cay. Most of these are booked well in advance, but may have last-minute space available. The trick to procuring last-minute space is to have had made arrangements well ahead of time. The “last minute” aspect refers to the time of arrival at the slip or haulout, not the time of making the arrangement.

It is essential to get well ahead of the situation. Yard manager Keith Li Greci at Nanny Cay says they still have space available. “We require a commitment for three months, no matter how long or short the actual period is,” he said.

Tortola Yacht Services, now under the Tui Marine umbrella, is “basically, jam-packed full,” according to manager Drew Whittaker. “We’ve been turning people away left, right and centre,” he said. Whilst accommodating slightly fewer boats this season, around 76, he relayed that TYS has had almost the same number of additional enquiries.

On the contrary, he said, it seemed there were a greater number of boats in the BVI than in previous years which may be a sign of an improved economy.

The Hurricane Hole in Paraquita Bay, a vast repository of boats that offers excellent shelter from all directions, is the default destination for working boats that are furloughed for the summer with hundreds of boats tied to moorings in the bay.

Paraquita is an excellent option and one favoured by the large commercial charter operators. As TMM’s Sam Welsh explained to me, “BVI Government has given the right to use Paraquita Bay as a harbour of refuge and a controlled hurricane shelter to the members of the Marine Association of the BVI. It is only used for this purpose during the months of the hurricane season and is to be vacated at other times.”

Members of the association, Welch said, “have an allocation. The charter companies put down their moorings and have a certain number of slots available to them. Some private owners have moorings there too—priority going to BVI-licensed vessels.”

Some mariners choose to sit out the storms at anchor. The one downside to this practise, and indeed to any in-water solution is that in the final hours before a storm arrives full-force, commercial ferries and other vessels are brought in to the bays and anchorages, anchored hastily by inexperienced crews and then abandoned to their fates. The result is that these boats risk dragging anchor, bearing down on the vessels deeper in the anchorage, which are themselves otherwise quite secure.

There are many other anchorages and areas to shelter a boat. One major dive charter has for years secured their vessel to mangroves and multiple anchors in Virgin Gorda’s South Sound. Others have pulled the vessel for a few days or weeks, and some get the boat out of the Territory altogether.

Whatever the choice, the planning needs to take place early and measures must be clearly mapped out to avoid last-minute confusion. Lines, shackles and other gear need to be checked and stored close to hand.

When all the planning is done, the remaining question to ask is the one renowned fiction character Dirty Harry once posed; “Do you feel lucky?” 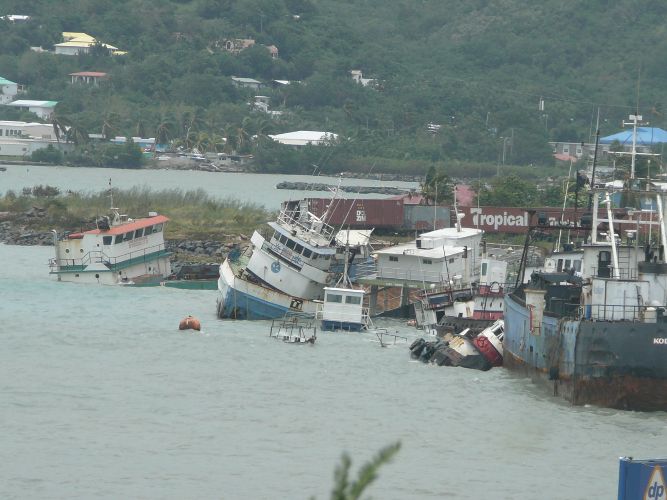