SAIL TIME – a quick look at our favorite fabrics – It’s an odd truth, but one of the last things cruising sailors seem to discuss when speaking about a sailboat is the very thing that gives the crew, the boat, and the sport their names: the sails.  Often taken for granted and hidden beneath a sail cover or deep within a nylon bag, the sails are hauled up and expected to perform without much attention from the yacht’s crew.  Perhaps once a year they’ll be sent off for a cleaning, but often they are ignored, mistreated and poorly understood.

In many ways this is understandable. Anyone who has ever opened an umbrella in a strong wind is aware of the propulsive properties of fabric stretched over a frame.  From ancient times, ships have been propelled in this way in every seafaring culture.  Sails have taken many shapes to reflect different approaches and traditions: the Chinese junk rig (lugsail), the Arab dhow, with its lateen sail, the European square rig, or the proa of the ancient Pacific.  These boat types and differing types of sail all achieved the same purpose of propelling boat and crew across the oceans.  Materials ranged from bark strips to simple woven cloth.  Advances in sail cloth and its manufacture followed in the footsteps of imperial conquest but in general, in the West, cotton was the primary material used.  Being in plentiful supply and simply woven, cotton was an ideal material for the sailmaker, though its tendency to stretch and the necessity for airing the sail to allow it to dry after becoming wet, whether from rain or from sea spray, made its use rather labour-intensive.  But then again, crews were cheap. 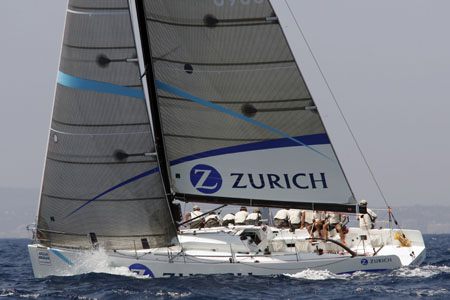 As the demand for performance increased and the availability of cheap crew diminished, demand arose for a more easily cared for and more efficient material.  It wasn’t until the 1950s that the first synthetic fibres were invented (Du Pont’s Dacron) but they soon dominated the sailmaking universe.  Low-stretch, less susceptible to rot and mildew than cotton canvas and lighter in weight, the miracle fabric revolutionised sailing.  Now anybody could care for their sails easily, the sails could last several seasons and were resistant to many of the problems associated with earlier fabrics.   To the present day, these polyester sails are still the mainstays so far as cruising sailors are concerned.

Hi-tech Sails
For the racing sailor or for one concerned with maximising performance rather than longevity, developments in synthetic fibres, fabrics and films have dominated the sail markets.  The introduction of Kevlar and its close relative Twaron, in the early 1970s, began a developmental process which continues today.  The biggest change has been from woven fabrics to laminates, in which fibre scrims (non-woven threads) or taffetas (woven cloth) are laid down within a film matrix, rather like a very thin sandwich.  These constructions can be very highly controlled so as to have greater or lesser thicknesses of fibre in places where low stretch is required.  The laminates depend on glues and high pressure to bind them together.   “Lighter and stronger” has always been the sailmaker’s mantra.  While the demands of the cruising sailor are not as extreme as those of, say, an America’s Cup syndicate, even the cruising sailor has benefited from all the innovation.

Where sail development is headed is a question addressed by the sailmakers themselves but the general trend will be towards individualised sails for a particular boat in particular wind conditions rather than for off-the-shelf solutions.  Whatever the developments and innovations, one crucial component driving the process will stay the same: the customer’s open wallet.

Film Is The Future
Quantum Sails’ Doug Stewart Picks a Winner – With patents expired on custom-strung sails, the industry will see all top end sails being made in-house rather than going the traditional route using rolled goods from a cloth manufacturer.  Each sail that is made is custom designed for a particular boat and for a given wind range. Unlike a tri-radial sail, where the amount of fibre or denier per inch (dpi) is the same throughout the whole sail, a custom-strung sail allows the designer to put more dpi in the high load areas and less dpi in the lower load areas.  Fig 1 represents a plot of a typical custom-strung sail. Each line on the plot represents a pass of fibre.

What will the next sail making revolution bring?  There is no doubt that there is another superfibre like carbon right around the corner!  The problem is that sail makers’ demands are small and the consumption by the super powers for their wars is great, so any new fibre will not trickle down to us as quickly as it should.  Mylar, the outer skin of the sail which is really used to hold the fibre and glue in place, probably is the next area where we will see changes.  Films will get stronger, which means sailmakers will be less reliant on fibre.  My opinion is that within 10 years, we will see a sail made just of film. Initially they’ll be very expensive and not very durable, but in the high end arena of AC and TP 52s, money certainly is not the issue.

The Woven Way
Doyle's Bob Phillips weaves longevity over performance – The sailmaking fabric industry is separated into two distinctly different groups, wovens and laminates. Laminates have proved, and continue to prove, to be a short-life fabric.  Wovens have longevity but have some drawbacks in terms of being woven—they don’t have the stability of laminates.

The two biggest sailing yachts in the world, Maltese Falcon and Mirabella V both have woven sails as there isn’t yet a laminate suitable for the job. In a laminate, the fabric would have been something approaching three-sixteenths of an inch thick, and as soon as you tried to roll it on a furling unit it there would have been problems.

Here in the Caribbean, where we have a fair amount of wind and sea conditions, a laminate sail probably has less than half the life of a good woven product. Doyle looks towards woven fabrics to provide the longevity our customers want, and as a consequence, we’re the only sailmaking company in the world that provides a 5-year warranty on both regular and hi-tech products, which is good news for the customer who runs a charter boat, he’d probably have to buy new sales every four years if he used laminates.

Cruising boats that support the racing-type laminates – those that are fast and hold their shape well – fare well if they live at the dock most of their lives.  It’s a great product, offering fabulous performance, just like a racing sail. But again, if you use the boat regularly you won’t get the life expectancy out of laminates.

So, we’re working to develop woven products that will give laminate-like performance yet still allow us to give a 5-year warranty and the owner the expectation of 10 years of use. We see the future to be, if you will, high-tech woven. The advances in weave technology are many magnitudes greater than anything that the lamination industry has experienced. There’s a tremendous amount of technology being thrown at weaving.