Fifteen Abbot Lane – Looking inwards and upwards from the Road Town Ferry Dock, you'll spy the deep purple and white fortress-style building known affectionately by Tortola residents as the 'Purple Palace'.  Its position and building style are no accident, for it once was a fort and its historical role was to protect Road Harbour from the marauding French, Spanish and occasional Dutchman. 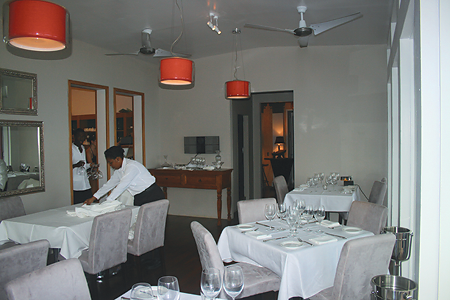 The Purple Palace was always intended as a Hotel and Restaurant in the 1960s, not quite achieving its full promise till August this year.  As the old Road Town Fort it still has the original strong room that once housed the islands' treasure, now a store room for the private hospital.  It became the Purple Palace after it was rebuilt on the fort's original structure, its new colour of paint declaring its new namesake.  It was later purchased and then turned slowly into a private hospital by one of the island's leading honoraries Dr. Robin Taterstall.

Rich in design, a plethora of cultural aesthetics misplaced but functioning in symmetry describes the décor in Fifteen Abbot Lane.  Antique framed mirrors from 1930 give depth to the main dining area with a hint of Japanese undertones in its red lanterns glowing above. Out on the main deck, Caribbean fusion is in sway on the dining deck outside overlooking the Harbour of Road town.  A pinstripe bimini keeps the palace in check with the old West Indian style of Main Street.  Tables, with freshly starched white linen are rounded throughout both dining rooms, classically a European feature whilst its chairs, low and comfortable are hints of 1950s America.  The bar area has a gazebo, somewhat Indian in its saffron coloured cushions with canopies fanning the breeze. Around the bar, high stools and leather chairs extenuate a private club atmosphere but the posture is dictated by the main feature of the entrance room, the tall and majestic bar. 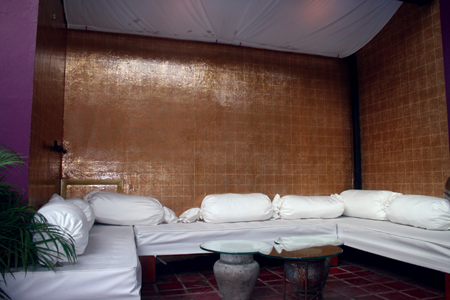 Alien, yet positioned as a focal point in the first impressions as you enter the restaurant is the wooden bar from China- Ming Dynasty. It looks completely at ease in its surroundings. It is rumoured to be the very bar from William Thornton’s house during his residence in Tortola, its origins we continue to fathom (though Sotheby’s of London have been to see it!). A man of eclectic talents and vision, it is no surprise that the bar may have been Thornton’s.  As a piece of practical art, it is far more appreciated in  decoration and a precision of craftsmanship  that is rich in colour and detail,  its carvings hold Chinese blessings, an altar to design.

Neil Tomes is the executive chef of Fifteen Abbot Lane.  His demeanour is modest, his menu practical. Neil’s repertoire is found in the ever tasteful input of selected herbs and spices from the Far East sprinkled magically over a mix of local and international products, and the taste is refreshing and unique, especially to the island. Neil does not boast about his efforts, taste is the deciding factor. Spending twelve years in Hong Kong, Japan and China, Neil has been involved in catering and film production behind the scenes for a successful long time. The restaurant, an eclectic set of styles from different eras extenuates a post modern glimpse of upcoming trends in BVI cuisine. Modern approaches are exemplified by Neil, whereby new flavours are subtly introduced, rediscovered and projected in a subtle context of learned restaurant professionalism.  Fifteen Abbott Lanes and flairs are reminiscent, yet new tastes to wonder and savour, a time to enjoy with a rich diversity of history and culture shared, humbly modest in disclosure.  Proudly he attributes his fusion to his experience of living in Asia as an expat submerged in the culture for twelve years.  His interests and style reflected in the furnishings selected by his partner Bronwyn, who put herself through law school by working in restaurants, the couple having met in China now filtering their style and skill in this new venture.  Alongside his Sommelier Thierry with his experiences of 20 yrs in California’s finest eateries and Will his sous chef from the kitchens of Gordon Ramsey in New York, Neil is building a winning recipe.

The two original lovers who designed their dream venture in Tortola nearly 50 years ago had temptation drive each other apart, leaving the hotel behind as an intact shell of broken dreams.  They have since passed away.   Full of promise and history the restaurant area was for many years an art studio for Mrs Tattersall alongside her husband’s clinic.  Now, the restaurant, in time has come into its original fruition, its new synergy setting the Purple Palace at peace, yet still retaining its style and grace.