The Jolly Roger Inn And Restaurant – The Jolly Roger insignia is prevalent in the BVI.  In West End, affectionately known as “the eartbeat of west end,” lies the Jolly Roger Inn, Bar and Restaurant.  This waterfront property has over 18 years of development and nurturing a dream of good food, good music and good times. In addition the Jolly Roger doubles up as the home of the Loyal West End Yacht Club and as proprietor Lou Schwartz says, “It was originally a Pirates Bar, if these timbers and planks could speak…tales of smuggling and nefarious doings would be known but they are best kept quiet.” 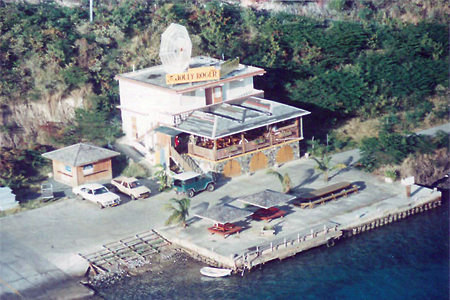 It hasn’t all been easy sailing.   The Jolly Roger has seen several makeovers and most notably suffered the brunt of hurricanes from Luis and Marilyn, within nine days of each other.  Taking it in their stride the Jolly Roger rebuilt their dock and restaurant.  On its takeover in 1991 Lou found that the original building was a little shanty, with its own sea plane dock and sought to give the Jolly Roger a new face and a new heart.  Their determination has brought a Caribbean fusion to the restaurant pioneered by Lou and his partner Kay.

In addition to being one of the forerunners of the BVI Culinary Team Lou Schwartz has combined his culinary skills under one roof, being the first in the BVI to introduce Thai, Sushi and an Italian hybrid of traditional western foods with Caribbean diversity.    Accommodating is my term for Lou. Ever friendly and professional he is modest and as pleased that he has been able to give back to the community that he serves on many fronts.

The majority of sailing regattas and events take place and are hosted by the Jolly Roger.  Proud sponsors of the Gustav Wilmerding 13th regatta in 2007 and the 29th Sweethearts of the Caribbean, the Jolly Roger also hosts the Firecracker event.  They have hosted and survived 12 interline regattas and have a reputation for hospitality well beyond the call of any local pub or restaurant.  On Thanksgiving the Jolly Roger hosts an open house where community and visitors come together for a cook out, free of charge.  Community spirit is alive and well, and in full force at the Jolly Roger.  Don't miss their Chili Cook Off. It's JR in a nutshell: good food, community, cold beer and a waterfront view.

Soundtracks to the Life of the Jolly Roger are eclectic and have developed into the Bud Light Music Series.  To name a few regulars on the waterside stage annual visitors are ace guitarist Max Cabello, Hudson and the Hoodoo Cats and Jimi Prime Time Smith to name a few.  One thing we can tell you about the music nights: it's packed, and jamming and boogying on down in the car park when the dance floor is full is a must and encouraged.  The revelry spills over.

There is a lot going on and like a good pirate ship it’s a hive of activity. Good food and lots of beer and rum available to the salty traveler.  This is the local spot for west end and you’re likely to see a familiar face or two when you visit.  You're always welcome at the Jolly Roger, its insignia gives a vibe of warmth, hospitality and steady innovative cuisine. You’re home here sailor, come back soon.