A Model Match – It’s the Americas Cup and match racing fever is running high.  A crowd gathers to cheer two men with remote controls concentrating heavily on two model yachts; the committee bandies a clipboard with a ladder system to determine the winner.  The sun is blisteringly hot but the beers in the cooler in the refreshment are icy cold.   The team mascots – dogs three times the size of the models – splash about in the water, bemused by the mini yachts sailing around water bottles sprayed orange.  We have boats, a course, competition, friends, it’s relaxed and organized… it’s the ‘mini me’ of match racing – remote controlled model yachts. 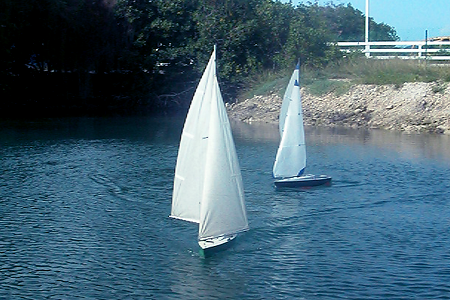 It’s not new to the BVI.  Huw Pritchard Jones is the phoenix of this once popular hobby and judging by the crowd, enthusiasm for the sport is rising again. Rumours and threats of old boats being resurrected from the bottoms of closets and new batteries being plugged into dormant controls are rife!

Previously the boats were sailed by a bunch of racers who, according to Huw, had nothing better to do in the off season.  With competition in the blood and a beer or two on offer, little was needed to entice the average racer or enthusiast to a sail requiring minimum effort.

Kevin Wriggley (old school remote controlled racer) and Huw, both competitive and accomplished sailors on the big boat circuit, now aim to get the old fleet, or what’s left of it, back together and fix it up.  Parts are still available, and the alternative options of building or purchasing new ones are not out of the question.

Remote controlled yachts do require a fair bit of preparation.  The boats can be put together by individuals and customized with the same precise detail of a racing yacht.  The cost, in comparison, is drastically cheaper but the concentration and attention to detail are the same.  A ballpark figure of $700 to have the kit ready to sail is suggested – not forgetting, of course, the hours of labour and the precision fingers required to get the boat match ready!

I did a bit of research and found that the cost of a boat as a kit comes in at around $175.  Add to that the Radio Control (RC) unit for $150 – which may require a bit of an upgrade such as adding a winch servo (High Power).  The enthusiasts tell me the build time is dependent on how much time you can put into the project or how competitive you want the boat to be.  A few web searches brought up some design pointers for making a speedier model.

Huw (engineer) and Kevin (sailmaker) share a passion for making things better.  As Huw says, yes there are new rigs on the market which the professionals will convince you are necessary for competition.  But, out here with the trade winds, you may not need the upgrade.  Building your own boat is half the fun, of course.  And the really cool part is sharing the information and encouraging each other to have a go.

And what about the racing?  Should we be expecting tantrums when messing with another man’s toy?  What’s the penalty for collision on the race course? Naturally, this has all been thought ahead and thankfully collisions are not costly.  The big boat racing rules of sailing still apply and you’ll note that in the back of a big boat rule book there’s a section on the amendments for remote control racing.  Check it out!

At the end of the day this is a hobby and the guys do not take themselves or the boats too seriously.  It’s a Sunday sport and there are always people willing to offer a hand in building, trimming sails, devising tactics or just helping to lay the marks.  The warmth, skill and support of big boat sailing are still there, but you don’t have to leave the dock.  Some will tell you that the biggest benefit is that the cooler you are sitting on also doubles as a cold beer store…

The summer has not long begun and there are already small boats sailing around Nanny Cay and a bunch of sailors sitting on their coolers having fun.  There is no reason why the boats can’t go on tour either!  A small amount of wind and preferably flat water are key to a good race; as is some shade and a good giggle.  Why not join them? 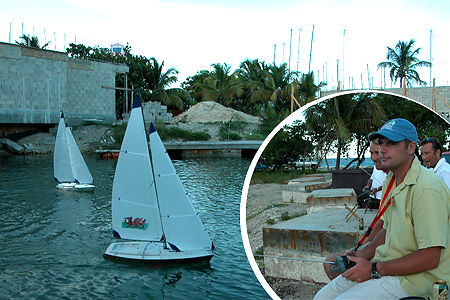