VILLA AT NAIL BAY – During our trip over to Virgin Gorda to view the pretty Mermaid’s Quay at the Nail Bay Luxury Resort Community, the sea was anything but civil, rising and falling as it was with the approaching northern swells.  Almost as if Oberon’s mermaid had breathed sweetly upon it, on our arrival at the property high on the promontory above the spectacular Mountain Trunk Bay the sea calmed and the dark and threatening clouds parted to reveal cerulean skies.

“Thou rememb’rest Since once I sat upon a promontory And heard a mermaid, on a dolphin’s back Uttering such dulcet and harmonious breath That the rude sea grew civil at her song, And certain stars shot madly from their spheres To hear the sea-maid’s music…”

The three-bedroom, four-bathroom Mermaid’s Quay is a Nail Bay stalwart in more ways than one.  As one of the original homes that made up the Diamond Beach Club, the precursor to the Nail Bay Luxury Resort Community, Mermaid’s Quay has not only stood the tests of time and ravages of nature, but is also one of the most popular choices of villa for vacationing families and their friends, offering as it does two king size en suites and a twin en suite, a sixty foot deck and ample indoor space for relaxation after a hard day at the beach.  The beach, incidentally, is merely minutes away; a short walk down the steps takes one straight to golden sands, crystal clear seas and a lounger in the shade.  And, if pouring drinks or preparing dinner seems like too much of an effort, the Dog and Dolphin Bar and Grill is mere minutes the other way.

Perhaps it is its proximity to the beach that makes Mermaid’s Quay so appealing.  Or perhaps it is the fact that although its layout is simple and practical, it’s a house with a humourous twist or folly – quite literally.  Decorated throughout in pastel shades – pink, coral and turquoise on the outside; mauves, cream, peach and mint greens on the inside, one’s immediate perception is ‘charming, calming and convenient.’  Large plate glass doors let in plenty of light, and each room is appointed and decorated to take maximum advantage of its situation and provide ample space for recreation or relaxation.  The view from the sixty foot wooden deck – think of the entertainment and al fresco dining opportunities afforded by that amount of space – is simply stunning.  The panorama skims the tops of the tall silk cottons, trumpet and Casaurina trees, stretching far into the distance where sailing boats drift lazily along the curve of the horizon.  Imagine the sun sinking into the channel between Scrub Island and the Dogs; a pouring of liquid gold into violet and indigo waters.  This setting must be incorporated into the definition of ‘romantic.’

If one were to imagine the house to be divided into three, the first two thirds formed of the twin and one of the king sized bedrooms, the living room and kitchen, then it is the latter third which incorporates the whimsy.  The second king sized bedroom is located at the end of a short corridor, thus creating a more private sanctuary. Bisecting this corridor is a spiral staircase descending to an as yet unfinished suite of three rooms.  If one were to buy this property with a view to letting it to Resort guests, completing this lower level as a self-contained studio would be one way to maximize rental income.  Alternatively, the whole house could be rented as a four bedroom five bathroom house under one roof – the only house at Nail Bay with such an offering. The central core of this stairway is multi-functional in that it serves to provide a space for a fun, circular shower room, both at the lower ground and main levels, where it forms an en suite to that second king size bedroom.

The stair case ascends, via the deck, to the roof and the property’s crowning glory, the folly.  From this pretty little rotunda with its deep pink shutters one is afforded a glorious, 360 degree panorama.  It takes that idea of a romantic cocktail at sunset to a whole new level… 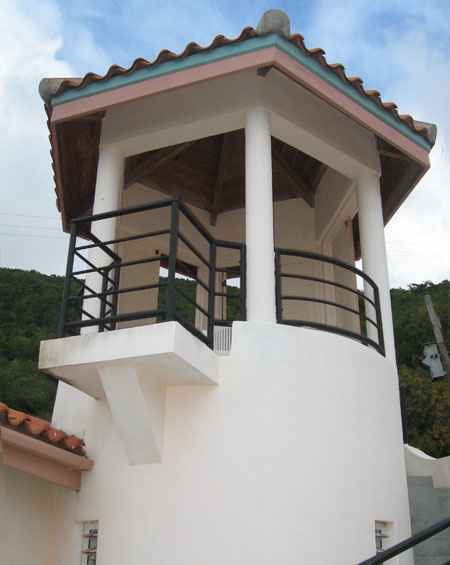 The qualities of the 147-acre Nail Bay Luxury Resort Community are often lauded in this magazine, and for every good reason.  The fully serviced resort provides every home with an underground electricity supply, backed up by state-of-the-art stand-by generators, a reliable central water supply, paved roads and, in the very near future, high-speed internet access and satellite television.  Owners and occupiers are entitled to use the resort’s amenities, from the restaurant to the floodlit tennis court and spa, and the administrative capabilities extend far beyond simple facilities management.  Opting into the management scheme covers the marketing and promotion of your property as well as managing the rental agreements.

Mermaid’ Quay is available to purchase for $699,000.  This property is priced below today’s market value to enable the new owner to renovate the facilities, add a pool and redecorate to meet current standards. With the apparent recent approval of a 5 Star hotel within Nail Bay, this will be one of the last opportunities to purchase stand alone property on the Estate at below a million dollars.