SIX HULLS OF MATCH PLAY – There’s only really one hotly contested class in the Caribbean Regatta season as far as some members in the Caribbean contingent is concerned.  And it’s a battle of the aged; the combined age of the two most fancied entrants pushing seventy.  Is this the open class or the old gaffers? No, it’s the Racing Multihulls! 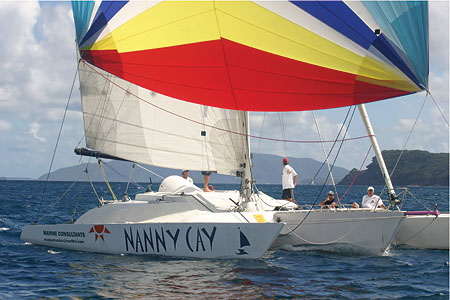 The fourth of five sisters imported to St.Croix, USVI, for the day sail business, Tryst is a bright red, Dick Newick designed Trice 2 trimaran built in Maine in 1969. Yes, that’s right; she’s 38 this year.  Built using cold molded 1/8” mahogany veneers bonded together with ‘resorcinol’ glue, she has certainly stood the test of time. Only one of her sisters survives, the others having been lost to various hurricanes.

In 1980, Tryst was purchased by Bob and Patrick Turner of St. Martin.  Bob wanted to use her to deliver ‘Hawaiian Tropic’ sun products to his distributors around the Caribbean.  Pat, however, wanted her for sailing and racing.  Pat is very competitive and races her voraciously with regular crew Dennis Berridge of St.Kitts and John Jackson of St.Martin.  Her mast is the original, but her sails are high-tech.  Structurally, she has been repaired a few times with that new-fangled epoxy stuff but her hulls are still largely her originals.

Fairly extensive repairs were necessary after Hurricane Luis caused her to perform cartwheels on her mooring. Randy West, aboard Shadowfax, the sleek Spronk cat, was hanging on for dear life near Tryst during Luis. He reported that she was doing pretty well until the winds shrieked through at 150mph, when she ‘suddenly lifted her bows to the solid wall of wind and danced around on her transoms, like a fish fighting for freedom!’ Tryst then capsized but fortunately, was not lost.  More recently, her daggerboard and trunk had to be reworked following a speedy ‘coming-together’ with the Phillipsburg dredge pipe moments before the start of the 2005 Caribbean Offshore Race.  Patrick is now the chief organiser for the Caribbean Offshore Race (formerly the Guavaberry Cup); he’s won that a few times and has always placed well in the St. Maarten Heineken Regatta.  Patrick's Tryst racing portfolio goes back to the 1981 Round St.Barths – a long-standing partnership indeed!

90 miles downwind, on Tortola, lurks another ‘old but bold’ trimaran.  Triple Jack is a 45’ Derek Kelsall designed ocean racer, built in Birmingham, UK, in 1979. Original owner Frank Wood raced her across the Atlantic in 1980 and nearly got there. The mast came tumbling down about 200 miles off Newport. Frank, crew and Triple Jack were winched aboard a passing freighter and were literally dropped back in the water near the finishing line when the freighter’s lifting strops parted, plummeting them one hundred feet back into the briny. As far as we know, this ‘vertical’ trimaran sailing record still stands!

Re-rigged, Triple Jack continued her racing career with another trans-Atlantic and two ‘Round Britain’s.  Steve Davis and Richard Wooldridge bought her 9 years ago, making the crossing to Tortola in 1997. Their regular race crew include; Sue Tucker, Chris Haycraft, Geoff Cooke, Olaf Krieger and George Lane.  Built in airex/GRP, Triple Jack has been repaired and modified several times; as I write the grinders and their epoxy are out in force at Nanny Cay Marina.

Triple Jack’s racing prowess is legendary in the BVI – ask anyone who has competed in the Anegada Pursuit race.  She’s always last off the start line and yet has clocked up two Pursuits in the last 5 years; and three wins and two seconds in the BVI Spring Regatta multihull division.   At the time of writing, Triple Jack is the 2006 St Martin Heineken regatta multihull champion, and took second place this year.

But Tryst is never far behind. Heavy air and offshore courses suit the larger tri. Tryst is more nimble and Patrick sometimes displays ‘superior circuit knowledge.’  There is a healthy rivalry between the two trimarans: both crews are tight-knit and know how to make these tough old birds fly.  Patrick has fellow restauranteur John on food and Dennis in charge of the rum – they’ve been sailing, racing, eating and drinking together for 7 years. Triple Jack has Olaf on beer and Chris on French tarts; and George, one of the originals from Exmouth, Devon, sailed on Triple Jack before he could swim!

Whatever the results, Tryst is almost certainly the oldest, actively raced trimaran in the world.  Teamed up against Triple Jack they make a right pair of geriatrics!

If you own (or can borrow) a multihull, remember the Caribbean Offshore Race is 16th to 18th May.  Lead loaders are welcome too (they get a big head start).  Patrick organizes the event and is keen to have a healthy turnout this year. St.Martin, St.Kitts and Nevis all in a weekend, what could be better?