Home >> Man of the Month

Man of the Month

Teen Dream-Alec Anderson – It’s not often the BVI gets to see young champions in the making.  Our brilliant local sportsmen, though groomed and trained in the BVI, often outgrow the challenges it can offer and so leave to seek their fame in the wider competitive world.     Behind every successful sportsman there is always a team of supporters also giving their all, from coach to encouragement.  Alec Anderson is your average Island teenager.  With the encouragement of his parents and family,  Alec has enjoyed nearly every aspect of the BVI waters.  He’s an avid diver, surfer and windsurfer,  and successfully competes in all the Island’s event offerings with regards to both the surfing and the windsurfing.   However, it is sailing that is his true passion.  His superb talent for this sport, combining speed, skill, sense of direction, sense of balance and technical ability, has boosted this young man to the very top of his field, and he’s well on the way to making a career out of competitive sailing. 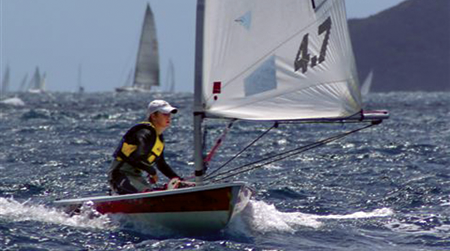 As much as the Islands need champions, the champion needs the Islands .   The BVI provides an excellent training ground.  The stable weather conditions offer hours of uninterrupted water time in just the right amount of wind with the right sort of gusting wind patterns.   As a result, there have been many BVIslanders to go the distance outside the Territory’s boundaries.  Robbie Hirst has an exemplary record in the IC24 racing class and was winner of the World Junior Laser Championships in 1987.  Matt Arneborg represented the BVI in Windsurfing at the Seoul Olympics in 1988, and Finian Maynard went on to become the fastest man on the water as a windsurfer, with a speed record of over 50 knots.

Alec is leaving the BVI for a short while.  He’s off to attend the Antilles School in neighbouring USVI’s St Thomas, but he promises he won’t be leaving the competitive sailing arena as a result.  If he’s to make competitive sailing his career, he’ll need to keep his eye in.   He hopes that the competitive field over there will provde not only new adversaries but also more challenges, more opportunities, and access to additional professional assistance.  Making a career out of sailing requires true dedication and grit, and there’s always a remote chance that it won’t quite work out.  If it doesn’t? Well, that’s what we go to school for, isn’t it?