The Viking Dream – A couple risks going it alone in the charter business – Sitting in the salon of Viking Dream, their impeccably groomed Leopard 4700 catamaran, Mark and Sally Duncan are the very picture of contentment. Well, they might be a little pressured by the deadlines of an upcoming charter, but they've been doing this work for so long now that there's no doubt all will be in place by the time the guests arrive.  Having only recently bought Viking Dream and having supervised her refit, Mark and Sally are as happy as two kids at Christmas, purring over their new toy.  “It was a purchase of the heart,” Sally says. “It felt really right when we bought her because of our previous history with her. Besides, if we didn't try,” she continued, “we'd always say 'Why didn't we?'.  We're just so pleased we've done it.” 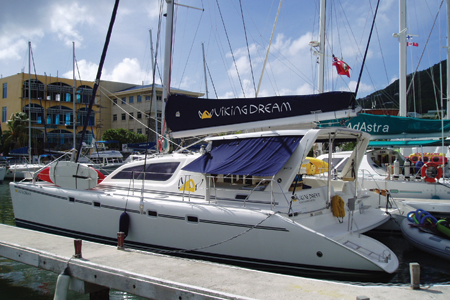 When Mark and Sally first considered the life of the sailing couple, they were on a year's leave from their corporate jobs in the UK, trying to find some balance in their until-then crazy lives.  Sally had been Training and HR manager with a major British retail group, sorting out employees' problems, whilst Mark had been on the other side of retail, setting up high-end malls in airports. He had 250 staff and 25 managers reporting to him and, when he wasn't traveling for business, he was dealing with the inevitable headaches of management.

“One day in early 2001, Sally sent me a text,” Mark told the BVIYG recently, “and asked me how my day was going.  I answered in four letters, and when I asked her the same question, she gave me the same answer.  We decided that evening to take a year out and within a week we’d resigned from our jobs and planned a world tour.”  They bought round-the-world air tickets, rented out the house and took off for some rest and recreation.  Six years later, they're still traveling. 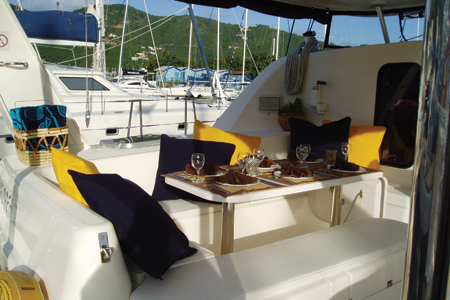 Their way to the BVI led them through a seven-month “Zero-to Hero” RYA Professional Skipper and Crew course, although they both were already experienced sailors.  With that in hand, Mark and Sally applied to the Moorings crewed yacht division but nothing was immediately available, so they spent a season in Greece and Croatia running flotillas.  “It was the worst-paid job we've ever had,” said Mark, “but the best fun.  It was awesome.”

Eventually, in November 2003, the call came from Moorings in Tortola that there was a yacht awaiting them.  “We arrived in the Bahamas,” Sally recalls, “and we had a week to get her ready and sail her down to Canouan.”  After a couple of seasons, however, a family emergency forced them to take an unpaid leave and return to the UK.

Upon their return, they were assigned Viking Dream in the BVI, which they ran until February 2006.  After some months of thinking about their future, Sally and Mark went to their financial advisor in the UK and asked some hard questions. “Always, year after year, in the back of our minds,” says Sally, “we'd been thinking, 'should we be doing this for ourselves?'”  They asked their advisor to let them know if they could manage to buy their own boat. “I actually told him,” says Mark, “to tell me how I couldn't do it. What I wanted him to say was 'Don't be silly, there's no way you can do this'.  But he came back and said, 'Actually, we can do this'.”

On their way back to BVI for another season with Moorings, they checked the brokerage listings and saw, to their surprise, that Viking Dream was up for sale.  “There comes a point,” Mark says, “when becoming your own boss is the only answer to some of the questions you might have.  With no disrespect to the Moorings or to the private owners we'd met, we felt we could run a charter yacht better or more efficiently than we had seen them run. If you don't do it, you'll always regret it.” 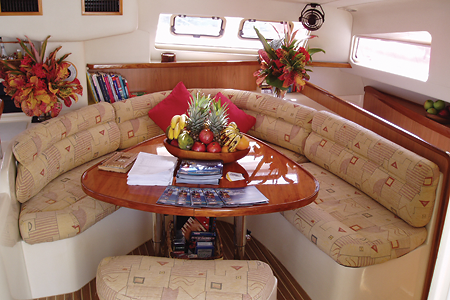 The niche that Mark and Sally on Viking Dream occupy is a competitive one, so setting themselves apart from the pack is a big challenge. “We knew there were other (Leopard) 4700s going into the BVI fleet at the same time as us,” Mark says. “And there were several already in the fleet, so we felt we had to make ourselves look significantly different from the rest. We spent a long time deciding on the colors we were going to use.  We thought about bright pink or electric purple to try and make ourselves stand out but we decided it just wasn't us, so we stayed with navy canvas work and introduced the yellow on the Viking helmet and on the cushions.”

The challenge was to create a brand. “We come from a retailing background,” said Mark, “and that is all about creating a strong brand image which we've tried to do with this boat.  There's been a little bit of history with the Viking helmets, so when we bought her we decided to build the helmets into the logo.”  “In fact,” says Sally, “we didn't actually buy a boat, we bought the eight Viking helmets. The boat just came with them.”

“One thing we were trying to get across to the brokers at the Charter Yacht Society show,” Mark says, “was that Viking Dream isn't just another boat, she's a very smart looking charter yacht with a bit of character.”

The Leopard wasn't the only catamaran Mark and Sally were looking at.  “We particularly like the look, and by all reports the performance, of Catanas,” said Mark, “but they were prohibitively expensive.”  Cost wasn't the only consideration, according to Sally.  “One of the business decisions we did make, and why we chose the 4700, was that, starting a new business in a new country, we wanted to minimize all the news,” she says. “We would have to re-learn all the systems, source new parts, whereas this boat we know inside and out.  Plus, there's a whole warehouse full of Robertson and Caine parts here if we need something.”

“Somebody did tell us,” Sally says, “that it was really nice to meet some owner-operators who had bought the boat as a business to charter, not who were chartering to cover the cost of the boat.  We have bought this as a business.”

Having added electric toilets and installed a new generator, Mark and Sally are holding off on their next round of improvements until the end of the season. The list is a long one, starting with a water maker and including new anchors, a new RIB with beefed-up davits and a new DVD system.

Sitting in their salon with laptop humming as Mark answers e-mails and Sally prepares a provisioning order, life aboard seems quiet and relaxed–a marked contrast to life on charter when the working day can be 16 to 18 hours long.  “‘Viking’ means Sea Traveler in the Norse language,” says Mark.  “We both love the sea and we love to travel, so there's nowhere else we'd rather be.”

“When I'm on charter, I never stop,” Mark continues.  “I don't understand those crews who say they get bored. There's always something to be done.” And whether it's slicing fresh-baked bread, finessing a marketing e-mail, or introducing guests to the joys of the Bubbly Pool, its all part of life aboard Viking Dream.