Home >> Learning from the Best

Learning from the Best

The Pro Am Regatta offers both pros and amateurs a unique opportunity to interact on the water and compete against the world’s most accomplished racers. In its 26th year at the Bitter End Regatta on Virgin Gorda’s north shore, the event continued to be a success for the handful of pros and the few dozen lucky sailors who traveled distances for the chance to learn from the best. 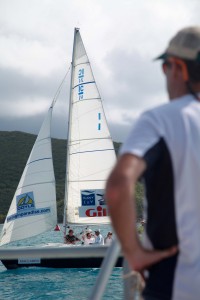 Bob Phillips, chairman of the Royal BVI Yacht Club, might have summed up the event best when he said, “Think if you could go to a golf resort and play with the top golfers in the world. Here you’ve got the guests sailing with the best.” The event, he added, also generates a lot of publicity for the local sailing community. “It’s huge because of the PR it brings,” the 40-year sailing veteran and Tortola resident said. “The one segment of the tourism industry doing really well consistently is sailing—sailors sail no matter what the economic restraint.”

This year’s lineup included Dave Ullman, Rob Crane, Zach Railey, Stu Bithell, Taylor Canfield, Andrew Campbell, Dave Berry and Bill Hardesty. Five of this year’s pros are under the age of 30—the youngest makeup of visiting pros the event has seen in its 26 years. This year’s event also hosted a number of local competitors from Tortola, who were invited to compete against teams skippered by pros and crewed by amateurs. The light-hearted yet competitive IC-24 team races were new to many local competitors who usually race against each other. At the end of the day, the pro team came out on top of the local crews. Although the daylong event headed admitted confusion among the local team, the matches provided an invaluable learning platform for all involved. 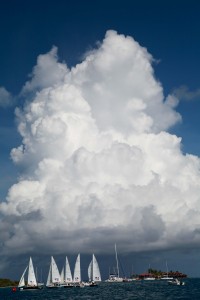 Sailing amateur Chris Smith came down from Tucson, Arizona for his fourth Pro Am Regatta. He was one of several to represent the Arizona Yacht Club. For Smith, the Virgin Islands allow him to sail in an idyllic setting under steady trade winds. And he also gets to enjoy the waters with “pros I’ve only read about.”

“The majority of [the pros] are talking while they’re sailing, so you’re listening and you’re learning an immense amount,” he said, adding that he learned invaluable strategies about wind approach, racecourse management and tacking from the greats.

Amateurs asked said they were particularly excited to see up-and-coming sailors participating in the event. And for the young pros, the event equally allowed them to learn from their older counterparts. 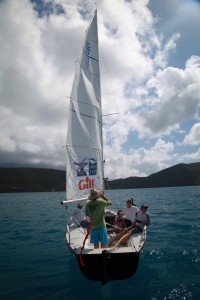