Knight of the Sea [Photo Gallery]

The drive from Cane Garden Bay down Joe’s Hill and into town usually reveals a familiar view of Road Town and its harbour. Often, there’s a cruise ship dominating the pier—sometimes two—and general sailing activity in the Harbour and through Sir Francis Drake Channel. But twice a year I’m caught off guard when an intimidating Royal Fleet Auxiliary ship adds a peculiar element to the otherwise familiar view. And during an otherwise average Wednesday in March, I took a closer look at RFA Wave Knight to find out exactly what the intriguing Crown-serving ship was doing in our waters.

It wasn’t the first time I’d toured an RFA vessel, which is currently visiting the Caribbean on routine business. In 2010, I boarded RFA Wave Ruler, sister vessel to Wave Knight. The two virtually mirror each other in size, but their missions differed slightly. While Wave Ruler visited us in the summer hurricane season months, Wave Knight came to us on routine visit to the Caribbean to assist with anti-narcotics operations, as well as assist with community service missions and training in the UK’s five Caribbean overseas territories. 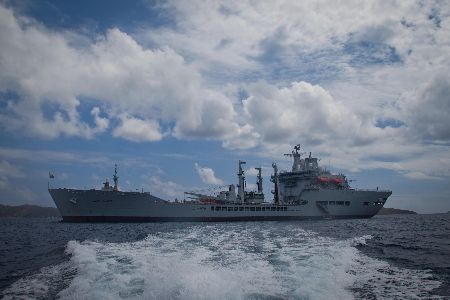 I departed Road Harbour with a small group of journalists on a tender headed for Sir Francis Drake Channel, where Wave Knight parked away from a bustling Road Town during a heavy cruise ship day. As we approached, the ship’s massive size and intricate industrial framework became more apparent. Wave Knight reaches almost 200 metres in length with a displacement of about 31,500 tonnes. The diesel-electric carrier is capable of reaching 18 knots with a range of 10,000 nautical miles at 15 knots.

We boarded the vessel from a staircase landing and were greeted by Cadet Guy Pascard. The 20-year-old crewmember joined a team of almost 90 on the ship; his young age and eager attitude seemed on par with the rest of his comrades.

While we awaited members from the BVI Fire Department to join us, Cadet Pascard led us on a tour of the vessel, taking us first to the vessel’s bow. There, cranes, industrial pulleys and fuel systems, and safety and intercept ribs make up for the heavy machinery used in the ship’s various operations.

We couldn’t pass by the “big guns” section of the tour without some “oohs” and “ahhs” and questions about how many times they’d been fired. Cadet Pascard explained that the two 30mm canons only fire in training missions and as a defensive if the ship is attacked. But that’s not to say that the shooters haven’t ever seen some action.

In 2008, Wave Knight participated in Exercise Khunjahaad, a multinational exercise in the Gulf of Moan to conduct air defense, surface warfare operations, board and seizure and joint gunnery exercises. In April 2009, Royal Navy personnel operating from the Wave Knight in the Gulf of Aden intercepted and fended off two pirate attacks using the ships armament. The effectively gave chase to the pirate skiff and, using its weapons as cover, held it and its mother boat until a Dutch naval vessel arrived. In all, 13 hostages were released and the pirates’ weapons were destroyed, according to UK National Archives.

Of the vessel and its capabilities, then-Commanding Officer Captain Pillings said in a Royal Navy interview, “RFA Wave Knight is a modern replenishment ship designed to be able to support a myriad of coalition maritime operations. Our primary role is refueling and aviation operations, but we are fully capable of conducting anti-piracy operations in and around the Horn of Africa.” 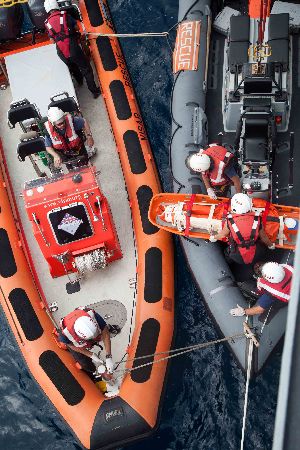 During the recent trip to the Caribbean and the BVI, fire rescue officers and personnel worked with local fire crewmembers and Virgin Islands Search and Rescue members to assist in training exercises. VISAR and BVI Fire Department personnel participated in and observed a rescue exercise to transport an injured person from the vessel to VISAR’s cutter and safely back to shore.

While the fast fleet tanker’s primary mission is to provide refueling to UK warships, they are also able to provide disaster relief during their stay in Caribbean waters. Over the last two years, the UK has significantly cut defense spending, and consequently the presence of a warship in the region has been suspended. But RFA vessels like Wave Knight have been increasingly involved in activities like counter-narcotic operations and work with local communities.

“We’ve stopped more than one boat—suspicious boats—but none of which were convicted or proven of anything,” said Commanding Officer Capt. Ross Ferris. “However, one of our successes is that we know we do deter quite a lot of activity that would go on if we were not here.”

Continuing, the commanding officer noted that the ship’s next mission included a rendezvous with US Coast Guard members in order to assist with counter-narcotic exercises. He did not divulge on specifics about upcoming missions. 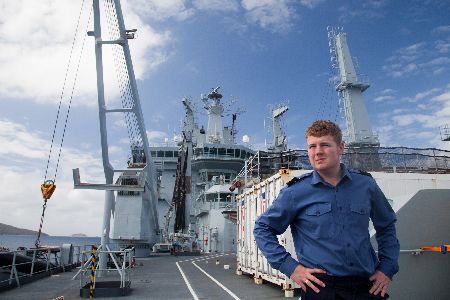 Permission to go to the beach

Although crew aboard Wave Knight agreed they did work hard and often odd hours, those asked said they enjoyed their work. After a busy schedule over three days in harbor, Capt. Ferris said he was looking forward to attending a quiz at The Royal BVI Yacht Club.

“Certainly my life has been involved in insuring that the ship is doing its job property,” he said during our visit, noting his interest in sailing and the BVI’s popular marine activities. “I’m looking forward to stepping ashore and experiencing this wonderful island. Some of my people will undoubtedly look forward to going ashore, and undoubtedly a few will check out Pusser’s to see what the rum tastes like.” 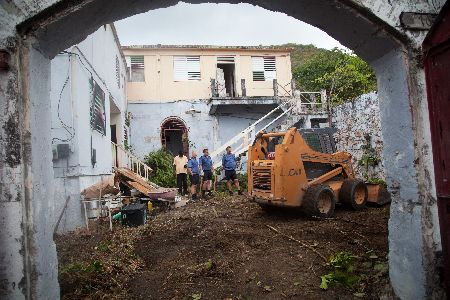 Not everyone on the RFA Wave Ruler went to the beach or the bar when visiting Tortola. Some participated in volunteer community projects. A group from the crew used their free time to help local teams contracted to clear out the old HM Prison on Main Street in Road Town, where plans have been hatched to turn the capital city’s oldest surviving building into a museum.

About a dozen crewmembers accompanied a local crew and Project Manager Hugh Whistler for the cleanup and renovation of the museum. The overgrown, inactive relic previously acted as the first prison in the territory. The building dates back 1774 and acted as both a housing grounds and galley for condemned criminals until capital punishment was abolished in the territory. The edifice is famously recorded in history—most famously after the execution of wealthy plantation owner Arthur Hodge on May 8, 1811. Hodge was hanged for murdering one of his slaves. The famous incident is cited as a significant historical milestone that contributed to the emancipation of slaves throughout the British Empire in 1838.

“I look forward to seeing the prison take its place alongside the other museums in Tortola, such as the Lower Estate Sugar Mill, the Folk Museum, Old Government House Museum and the Maritime Museum,” BVI Governor Boyd McCleary said about the $100,000 restoration project, noting a similar exercise taking place at St Philip’s church in Kingstown. “This too is a building with an important story to tell about the liberated Africans who were settled there in the early 19th century after being taken off slave ships by the Royal Navy.”

As overgrown bushes and debris make way from the prison’s courtyard and various cells, the historic building is beginning to reveal a preserved piece of history. Wooden floors and bedding previous used by prisoners still exists within the cells, and a glimpse into history is slowly seeing the light of day once again.