GRIP IT N RIP IT – With postcard beaches and idyllic sailing conditions, you would be right to assume that the BVI is a great destination for kiteboarding.  It’s not surprising then, that many people actually plan their yachting vacation routes around the most likely kiteboarding spots.  The conditions in some locations are superb, with everything from butter-smooth water to exquisite and exclusive waves.  The thing that most people don’t know is how hard it is to get out there safely.  We suggest hooking up with the local kiteboarders – they know when and where to go, but it took them a while to figure that out. 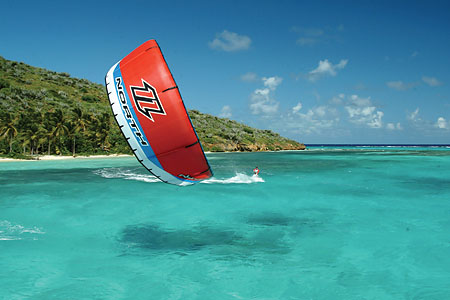 The first equipment arrived on Tortola in 1999, not long after the first production kites were available.  A Frenchman named Serge Grisseman flew in for a two-week visit with Trellis Bay legend Jeremy Wright. Serge let BVIslanders Mike and Robby Hirst borrow his 8.5m Wipika tube kite on Long Bay, Beef Island.  The brothers, having already mastered most other watersports, thought it looked suitably dangerous and worth a go.  They were immediately hooked and decided to buy some kit.  As seasoned sailors, they quickly realized that there weren’t many safe places to learn and saved their equipment trial for the deep sandy beaches on Anegada.  Apparently, it was Robby who suggested that Mike hold the bar first when, 80 feet downwind, Robby helped the kite catch the breeze and watched his brother get plucked from the beach like a teabag and launched 20 feet into the air.  After a quick appraisal of what just happened, the brothers soon learned the potential hazards and the importance of safety.

They’re not the only ones with a story.  In the early days, there wasn’t any school to teach us the basics; we all had to figure it out the hard way.   Anyone who owned his own kit was an instant expert.  In 2001, I remember being given my first opportunity to kite.  It was very windy and my ‘instructor’ (who realized it was too windy for him to enjoy himself) just said “Keep the kite in the air and don’t let go.”   Well, all I could remember was “don’t let go” and I was subsequently catapulted from Benures Bay to Pelican Island, mostly in the air.  I was eventually flicked off the handle by such a force; it felt like I had jumped off a bridge with a non-elastic bungee chord.

These days, there are fantastic teaching facilities, locally at The Bitter End Yacht Club and Cabarete in the Dominican Republic.  This has made the learning experience much safer and more fun.  Even so, anyone who has progressed will be able to describe a moment when their life flashed in front of their eyes.  This phenomenon is known as a kitemare and everyone who kiteboards has had at least one.  In fact, some people have them on such a regular basis that it is refreshing to see them come back in one piece.

In response to the rising numbers of kiteboarders in the BVI, we have formed the BVI Kiteboarding Association (BVIKA), to help people enjoy the sport safely.   We have a PDF download which details the safest conditions at any suitable spot in the BVI.  The most popular places to kite are Nanny Cay, Eustatia Sound and Anegada.  We strongly advise you to contact the BVIKA to get a copy of the BVI Kiteboarding Guide if you’re visiting or unsure about your ability to stay upwind.  Our aim is to support kiteboarders here so they can get the most out of their vacation.