Home Décor Security Lighting – Usually we never consider the need for security lighting until a situation arises that brings this issue to the forefront of our daily agenda.  Despite thoughts to the contrary, a high level of security can be achieved at an affordable cost.  However, an effective security lighting system does require a strategic installation plan in order to deliver the impact of surprise, which will deter trespassers. 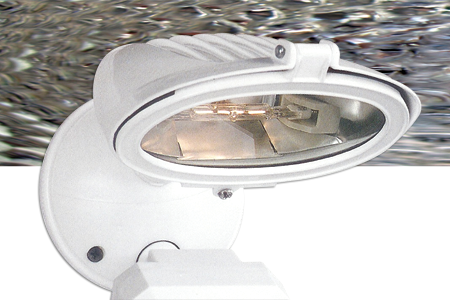 There is an important note that stands as a primary rule with regards to security lighting: the reaction of the lights must mimic a home owner reaction to the presence of a stranger being outside or inside the secured area.  This is best accomplished by installing a combination of perimeter lighting and motion sensor systems.  In order to secure an area effectively, two rows of perimeter lighting are required.

First Row Perimeter Lighting
This phase of security lighting focuses on detecting motion on or around the boundary.  It comprises a combination of mid-size, ground-mounted flood lights controlled by a motion sensor or group of motion sensors, situated at various points of the boundary.  This lighting should be mounted at least 6 feet from the boundary-line and positioned to cover every point on the boundary.  Lights should discreetly merge with hedges or shrubs at a 35 to 45 degree angle facing the boundary, effectively triggering a surprise effect when activated.  Mid-size flood lights are best suited as first-row perimeter lighting, as they distribute light widely.  Such lights retail between $69.00 and $130.00.

Second Row Perimeter Lighting
The second row of the perimeter lighting should be positioned on the surface of the home or secured area.  These fixtures are usually mounted at least 9 feet from ground level and directed at a 45 degree angle away from the home.  Small flood light fixtures are best suited for this task, as they can be mounted discreetly on the building surface.

In most cases, flood lights with built-in motion sensors are usually used as second row perimeter lighting, as having a remote motion sensor at strategic points will mimic human reaction to unknown movements around the home or secured area.  In most cases, the second row of perimeter lighting is usually coupled with either an alarm system or a video surveillance system, which is also triggered when the security lights are activated.

The most common type of motion sensor system is a flood-light with a built-in motion sensor.  This system does not effectively mimic a human-like reaction to the presence of an intruder and is not therefore considered a truly useful deterrent to trespassers.

This system can also trigger various lights within the home (such as lights in the foyer) simultaneously with the activation of the security flood lights, giving the perception that the homeowner has been startled by the movement within the perimeter.

Added security devices such as alarms or video surveillance systems can be integrated within any phase of the security lighting process.  In a time when people are a little more concerned about securing their property, take comfort in knowing that www.uniquelifestyles.com approaches every project with your pocket and unique lifestyle in mind.