Still Going Strong 28 Years On – It’s one of the biggest events in the windsurfing calendar (that’s boardsailing, if you’re from the western side of the Atlantic) and it draws a raft of contenders from the global windsurfing elite.  There’re 150 miles’ worth of gruelling, inter-Island courses to negotiate; a week of aching muscles, hard partying and break-neck speeds – records will be broken if the wind is right – to complete; and there’s a highly coveted trophy plus cash at the end of it all. 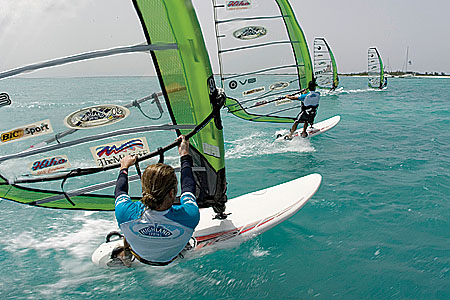 The well-known Highland Spring HIHO event was started in 1979 by a group of St Thomas windsurfers: John and Alan Philips, Kenny Klein and Smitty, who ran a watersports operation out of Cowpet Bay.   The Hook-In-Hold-On, as it was then known, was an instant hit.  By the mid-1980s the event had acquired a sponsor in the form of top Scotch brand Johnnie Walker, and become the biggest and most popular event in the windsurfing diary, attracting some 100 competitors annually.

Although truly international, the intense competition pulling in world-ranking competitors from as far afield as Australia and Maui, Virgin Islanders have always figured in the event’s top ten.  Deserving of mention is the inimitable Chris Thompson, a St Thomian whose name appears on the trophy list several times.  The Thompson family even pulled a double one year, with Chris taking top honours and his wife, Christine, nabbing the women’s crown.

In 1986, the year Andy Morrell, a Tortolan windsurfer, tied for first place, Johnnie Walker ended its sponsorship. Six years of hibernation followed until Morrell, looking for an exit from a run as a pro-windsurfing journeyman, acquired the Hook-In-Hold-On name with a view to resurrecting the great event.

“Our plan was simple,” says Morrell.  “We loved everything that made the Hook-In-Hold-On great, and we wanted to bring it all back – the inter-island racing, the parties, the yachts, everything.” 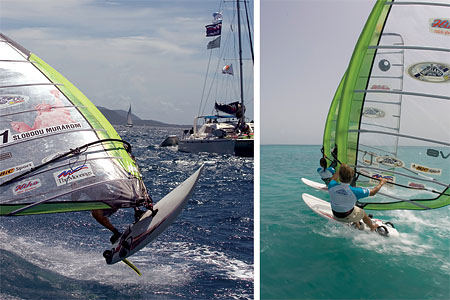 The new event got off to a modest start with a smattering of  VI and Aruban racers aboard a couple of Moorings yachts setting off on an inter-island jaunt.  But Morrell was nothing if not passionate when it came to seeing his hopes and dreams through.  Now simply called HIHO, the format merged the windsurfing race with a flotilla of captained catamarans and combined the challenge of island-to-island windsurfing races with enthusiastic camaraderie at great meals and parties.

In 1996, Bacardi Rum signed up as title sponsor and the event soared.  Broad media coverage, from magazines to television, led to a surge in participation which topped out in 1999 and 2000 with over 250 participants.

Current sponsor Highland Spring took over in 2001 and the popularity of the event served to help strengthen relationships with top windsurfing companies BIC and Neil Pryde.  The BIC Techno 2 became the official board for all racers; while Neil Pryde V8 sails became available to rent.  Nowadays, racers arrive in Tortola with just their harnesses.  They simply sign out boards and sails, move aboard their designated Moorings catamaran and sail their way through the British Virgin Islands.  Windsurfing competitors cover over 150 miles of inter-island racing, with favourite components including the Virgin Gorda-Anegada blast and the 25 mile long Sir Francis Drake Channel challenge.

A late addition to the 2007 event itinerary is lunch at Necker Island.  The fleet will race from Anegada to Necker, where the resort’s enormous swimming pool awaits.   Following a sumptuous lunch, the fleet will weigh anchor for the sail down to Trellis Bay and the event’s biggest night out, the Highland Spring HIHO Pirate Party hosted by the Last Resort.

There are 55 racers lined up for the Techno 2 class and another 20 in the Open class for 2007s event, scheduled for 1st to 8th July.  Excitement reigns as the Royal Navy Windsurfing Team, along with top rated competitors from the UK, France, Italy, Hong Kong, the US, Canada, the Cayman Islands and Martinique confirm their intentions to test their endurance on and off the water.