Hi-Tech Sailing:Gadgets Galore – Almost since history began people have been developing ways to figure out their position on earth and to navigate from one place to another. Early mariners relied on angular measurements to celestial bodies like the sun and stars to calculate their location.

The 1920s witnessed the introduction of a more advanced technique, radio navigation.  Navigators first relied on radios to locate the direction of in-range shore-based transmitters; later, the development of artificial satellites made possible the transmission of more-precise, line-of-sight radio navigation signals and sparked a new era in navigation technology.  Satellites were first used in position-finding in a simple but reliable two-dimensional Navy system called Transit.  This laid the groundwork for a system that would later revolutionize navigation forever, the Global Positioning System.

SONAR, an acronym derived from SOund Navigation And Ranging, is a system similar to RADAR which uses sound waves to locate objects.  The first SONAR-like device was invented by Lewis Nixon in 1906 to detect icebergs.   The device was used for submarine detection, with limited success, during World War I.   However, refinements ensured a major role in World War II, and today its multiple functions include underwater navigation, fish finding and sea floor imaging.

Nobody can be credited with “inventing” RADAR (an acronym derived from RAdio Detection And Ranging).   The idea, a spotlight that could cut through fog, had been around for a long time.   It was not until technology caught up with the idea at the start of the 20th Century, though, that the first RADAR system was built.

Great Britain made huge advances in the field of RADAR technology in the years leading up to World War II.   The early warning RADAR system, “Chain Home”, which warned of aerial invasions, was in fact the advantage that the outnumbered Royal Air Force needed to defeat the German Luftwaffe during the Battle of Britain.   While RADAR development was pushed because of wartime concerns, the technology was primarily developed as an anti-collision system; the 1912 Titanic disaster being the raison d’être. 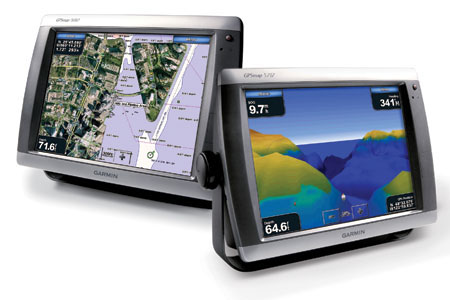 One of the earliest Global Positioning System (GPS) machines was the 1980’s panel mounted Garmin GPS 150.   Not quite 30 years later, Garmin has produced a GPS system that literally lets your fingers do the walking (talking, I’m sure, will follow), with its touch-screen 5000 series.   The system is set to revolutionise marine chart plotting and fish finding with its brand new g2 vision data plug- in card, which allows the screen to accept hi-resolution aerial photographs and satellite imagery to assist in tricky navigation.  In fact, the resolution is so good you will be able to recognize your favourite restaurant and check out the fuel station.   For the fisherman, g2 technology lets the GPSMAP 5212 graphically depict a topside or underwater 3D image.

When installed, the 5212 has the appearance of a sleek flat screen television that would not look out of place in your home.  It is waterproof and has all the usual interface capabilities combining GPS, RADAR, SONAR, satellite weather systems and other data, providing unparalleled and unequalled quick positional information.

If this equasion looks a bit scary..(below)… then luckily for us calculating whether to buy a RADAR system or not has become a lot easier.  Northstar’s new high definition digital networked RADAR systems combine high performance scanners and microwave technology with the very latest in digital RADAR processing.  With scanner options ranging from a 2kW/18” dome up to a 25kW/84” array, there is a high-performance RADAR suitable for your boat.

Raymarine’s new E-Series High Performance Multifunction Navigation Display with a 12.1” Ultra Bright Sunlight Viewable Color Display is another unbelievable find.  Simply connect the appropriate sensor to transform the display into a fully functioning chart plotter, digital fish finder, RADAR or on board video system.  It offers super-fast, 100 Megabit networking and connects up to 8 SeaTalk handsets with simple plug and play interfacing.  With a remote station kit, you will be able to see and control your E-Series from anywhere on board.  If the techno-talk sounds too much, rest assured that Raymarine systems are absolutely user-friendly.

The HX600S from Standard Horizon is everything from a life saver of the physical kind to a life saver of the mental kind.  This unique, submersible radio is capable of being connected to a GPS through the charging cradle, which allows DSC distress calls to be sent with GPS plotting.  A very handy feature if you have to get off your vessel in a hurry.  In addition, this device produces 700mw of speaker output so you can hear communications even in noisy environments. In addition, with advanced receiver capabilities on FM music stations, AM broadcast band and Aeronautical band, you will not be short of onboard entertainment!

“What lies ahead?” is an ancient mariner’s question.  If it is shallow water, obstacles, fish, etc. then most SONAR or depth sounders (or fish finders as they are sometimes known) will be able to tell you what is under the water in the immediate vicinity.   To tell what really lies ahead, FarSounder’s forward-looking 3D SONAR has been designed as a surface ship navigation device capable of detecting whales, shipping containers and other in-water obstacles.  It is also capable of generating a 3-dimensional depth map over its entire field-of-view with a single ping. In fact, it is so good at predicting the future, The World has bought one.

The World, ResidenSea’s private luxury condominium cruise ship, will have a FarSounder navigation and obstacle avoidance system installed during its spring dry-dock scheduled for Lisbon, Portugal.  This system provides The World increased accessibility to explore many of the unique and remote areas it cruises while also providing an added level of navigation and obstacle avoidance capability for the benefit of all on board.