Home >> Have you seen this?

Have you seen this?

Have you seen this? – Following our last issue featuring one of the BVI’s wrecked barges on the front cover, our fearless leader managed to snap these shots in progress.   Kevin Rowlette and the Husky Salvage team, complete with smiles, attempting to right the Island Seal in Road Town Harbour.  With as much environmental consideration as possible the first attempt did not work to right the 300 tonne hull.  Even with the assistance of the Pacific Seal and Lakota tugging away at the chain it remained a reef.   The following week on September 30th, they tried again with two even larger boats for the tow, but still encountered resistance from the sunken barge.  The third attempt on the 6th October, involved 4-5 boats strung together for the tow and still left the stubborn upturned vessel defiant in its groundings.

The plan for the wreck is to have it righted and towed to Trinidad for major works before it continues on its normal commercial practise.  At time of press, she still sleeps upside down.  We will continue to monitor events, so keep checking the Breaking News section on www.bviyg.com.   The BVIYG wishes Rowlette luck this apparently frustrating endeavour. 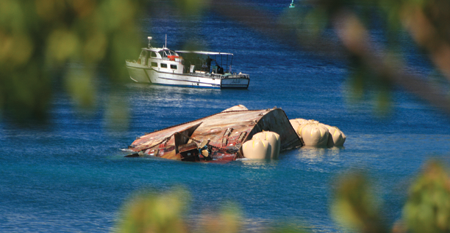