WHICH WOOD WILL DO? – There are few trees in the BVI suitable for cutting and fashioning into furniture; and the Islands’ few skilled carpenters are so much in demand for large building projects that individual pieces are extremely rare. Yet, in more general terms, there is a distinct style to the wooden furnishings one finds adorning most Island homes.The style is at once familiar, evoking images of a bygone era, but a modern approach to its construction ensures the pieces suit a more contemporary setting.  The style is referred to by designers as Caribbean colonial, a term embracing myriad origins.

The majority of the furniture we see in the BVI is imported.  Most of the heavier wooden pieces come from the Far East.  Indonesia is now a hothouse for furniture, annually attracting thousands of buyers seeking resilient and beautifully crafted pieces to fill their tropical residences.

Arawak’s furniture is imported from Bali, and Arawak owner, Roy Keegan, has been travelling back and forth for ten years in search of beautiful pieces to suit the BVI property market. Roy describes the pieces he brings in as “Old Colonial.”

“The Danes were the first settlers here.  Furniture, for the Danes, was not only for practical purpose, but was also a status symbol – much like it is for many of us today.  Much was imported from Indonesia, a former East Indian colony.” 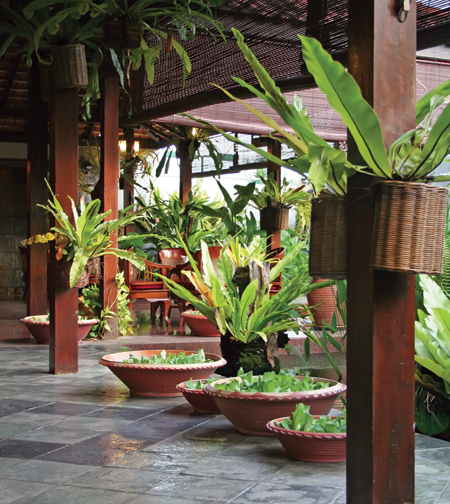 Roy points out that the difference between Balinese and European furniture is in the carvings.  Whilst the Europeans have traditionally favoured smoother curves, the Balinese, as with most Far Eastern artisans go to great lengths to show workmanship in their pieces, with decorative and intricate carvings.  Roy’s suppliers are small villages dedicated to the manufacturing process.     “In Bali,” smiles Roy, “a whole village can be full of skilled persons wanting to express and produce pieces. It’s not uncommon for work to stop for weeks while the village has a ceremony and all the workers are making pieces specific for the event. Its dedication and it holds things up, but we respect it all the more.”

Roy spent months in Bali with his wife Jane travelling and learning the culture. “I couldn’t import cheap mass-produced furniture; with wood and skill, you get what you pay for. We source all aspects of craftsmanship and often our contacts take inspiration from the diagrams or pictures of what our interested customers want.”

Moving large consignments of furniture across the world to the BVI is not an alien concept. Designed by local architects, Necker Island lodge was built in Bali, taken down, packed up and relocated to the BVI and restructured. Every detail is considered, from materials to shape.  The suppliers favour Plantation Teak over other woods, as teak is hard-wearing and can be revitalized every six months or so with a little sanding and oil. It has depth and character and Balinese tradesmen collect re-claimed teak from old plantation houses in Bali and refashion the old and hardy wood, into modern furniture. Teak is a sought-after product and more readily available than mahogany, once bountiful in Tortola.

Sadly, Tortola’s, and the rest of the Caribbean’s, mahogany forests have long since been demolished.  Initially felled for settlers’ furniture and housing, those stocks that were occasionally replenished were at the mercy of hurricanes – the young saplings lacking the strength to weather out the storm once the more mature trees were stripped out.

Historically, in examining the colonial style each settling community developed a style that was familiar to home yet using local materials created a new standard of design and product that was exported back to the respective mother countries.

Mahogany was the furniture maker's wood of choice in the West Indies, and from the early eighteenth century it was the world's premier cabinet wood and the most valuable timber in the Caribbean. Swietenia mahagoni distinguishes West Indian mahogany from Honduran and other mahoganies. It was introduced to French cabinetmakers in the third quarter of the eighteenth century and was first used principally for veneer. In the 1780s solid mahogany furniture came into fashion in France, in a sense imitating that in the West Indies. Source encyclopedia

Mahogany supplies are running low so the island chains find themselves importing more and more teak pieces from Bali. One of the oldest colonial homes in the Caribbean is the Heritage House in Nevis.  Its furniture style is consistent with modern imports seen in Tortola.

Roy notes an interesting phenomenon surrounding the Balinese imported furniture.  “The first piece of handmade furniture in your home initially looks out of place.  But, we find that slowly, every piece gets upgraded and we have friends who have shipped containers back to their hometown full of Bali furniture. It reminds people of the islands.” The imported furniture once again takes on its colonial meaning, and roams on. Our imported style in Tortola is a renaissance of Danish and Dutch teak colonialism, produced in Bali and suited to our climate; supporting longevity, modesty and style.