Remember your first time? To the BVI that is. Chas Fulgham recalls his first experience sailing our waters.

With my “Out of Office Assistant” valiantly deflecting emails, and my cell phone banished to the furthest reaches of my carry-on bag, stepping out of the airport on Beef Island and onto an awaiting sailboat in Trellis Bay seemed just what the doctor ordered. That is, of course, if your physician is Dr. Feelgood.

As one of 18 on a week-long chartered sail around the British Virgin Islands, I arrived with great expectations, a few swim suits and t-shirts, and enough boat provisions to make me look like a bootlegger at a weight-loss camp. Divided between a sleek catamaran and a narrow 50-foot monohull, our group comprised a game assortment of family, friends old and new, seasoned salts, and eager neophytes. As one of the “newbies” I was eager to shake off the mainland melancholy and embrace the energetic, yet loose-limbed vibe that seemed, while inherent in locals, open and accessible to any willing to adopt it. I was also eager to sail the clear open waters (masses of aspirin at the ready, which thankfully went unused) and maybe get a beginner’s grasp of sails, lines, tacking, and mooring. 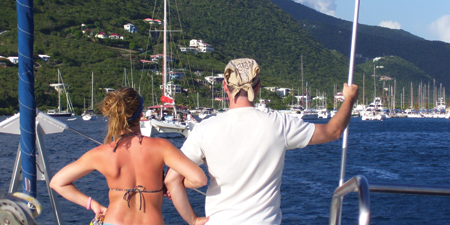 On my first full day of sailing the islands, I am leaning to the weather on the bow of the monohull.  We are making six knots that feel as swift as an arrow’s flight. Verdant hills (mountains really, to a flatlander like myself) jutting clear of waters the color of which inspire the names of paint swatches slide by in smooth succession as we make our way to the Baths for my first real snorkeling experience. As a very inexperienced snorkeller, donning a mask and flippers and wading into a mass of coral isn’t exactly the same as diving for coins in my grandparent’s swimming pool in Mississippi. After practicing some mouth-breathing (hey, no Southerner jokes), I slide into what can only be the largest, clearest aquarium I have ever seen. Tiny Technicolor fish dart through stands of coral while sea turtles swim around (like Momaday says their red clay brothers do) going nowhere in plenty of time. It seems so unreal I half expect to see a treasure chest nestled on the sea floor, belching out bubbles into a mermaid’s castle.

The eye-opening experience of snorkeling was nothing compared to the eye-popping experience of a “Full Moon Party” at Bomba’s Shack. Several of our group took a madcap cab ride to Bomba’s just as the fat, yellow moon was rising over the hills on Tortola. Having been warned about the “special tea” of the house, I used my drink tickets for cold local beer and marveled at the hodgepodge of driftwood, debris, scraps, and salvage that made up the structure of Bomba’s Shack, not to mention enough under things tacked and stapled around to the joint to render Victoria’s secret common knowledge. The main event of the Full Moon Party, the true heart of this island throw-down is the frenetic, contagious dancing of Bomba’s revelers, and the rhythmic, kinetic, soul-scouring, words and wails of the bands that play on until the full moon boogies off into daybreak. 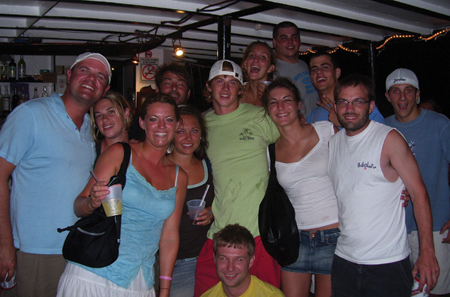 The best place to recover from a night at Bomba’s has to be White Bay Beach on Jost Van Dyke.  Translucent, neon water ringing an eye-squintingly white beach dotted with lounge chairs and palm trees beswagged with hammocks are a welcoming sight to a footsore sailor.  A few rejuvenating Painkillers and a saltwater baptism later, and you are reborn: a grown-up island child purged of worries and possessing of the finger-snap-shoulder- roll swagger of a lifelong islander.  My advice is to ride this feeling for as long as it lasts because it tends to stiffen and fade once you board your flight home.

And home I must. Back home to e-mails and phone calls, post-its and PowerPoint. But, it’s okay, really. I’ll be back next trip. You can’t refer to yourself as a first-timer if there is no second time.  Then you would just be a one-timer and that just reeks of laziness. So in the meantime, when the office is too loud or the bedroom too quiet, I can summon it all in an instant: I’m lying in a bunk on a sailboat. Hatches are open to the stars and the breeze, and I, flush with the sun of the day’s sail and a fair share of rum, readily close my eyes as the sea slow-dances me to sleep in the night-blued waters off Tortola.