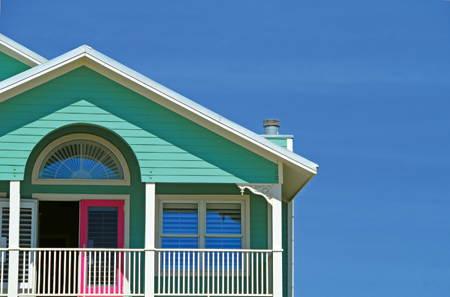 Known for its warm climate, breathtaking beaches, and exotic flora and fauna, the Caribbean habitually draws people from all over the world.  Artists, musicians, and those who simply love what the Caribbean is about, come each year to vacation or to permanently live and work.  Yet, subconsciously, one of the biggest draws is the colours of the region.  Its natural environment is captivating and the quality of light accentuates the natural palette.  The tropical sun reflects off the turquoise colours of the sea and its renowned reefs, meeting the deep blue sky in a warm embrace.  Lush green vegetation is complemented by exotic flowering plants, like yellow alamanda, red hibiscus, multi-coloured heliconia, pink begonia, orchids and wild bougainvillea.  Adding to its natural beauty is its diversity; it is a crossroads of many cultures and people.

From the native Arawak and Caribe Indians, to the European colonists, to the African slaves, many footprints have been left over time throughout the region.  An array of differing art, music, dance, literature, speech forms and religious practices has helped to shape the culture of the Caribbean Islands.  Yet, it is the powerful use of colour, deeply inspired by the natural environment, which truly characterizes the style of the Caribbean. 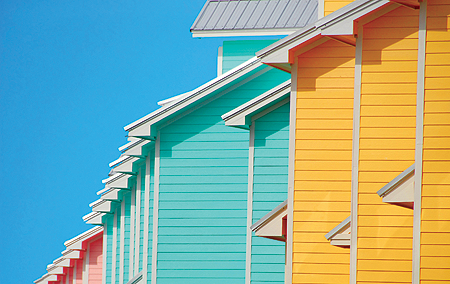 Beginning in 1518, the transatlantic slave trade was established, supplying the greatest share of the Caribbean population (approximately five million people) over a time period exceeding 300 years.  After the abolition of slavery, the new found freedom brought with it an expression of identity; with colour being one of the means to do so, as often seen in the small chattel houses, or moveable homes, of the plantation workers.  Paint was relatively inexpensive but scarce, so the use of colour became an expression of status; when European ships travelled to the islands to load up sugar and deliver supplies, paint was a miscellaneous item often brought over.  However, it wasn’t until World War I, when paint became widely available, that the look of the built environment began to significantly change.  Soon, every surface provided the perfect opportunity to experiment with different colours.  Whether for decorative or symbolic reasons, colour in the Caribbean was in full bloom.

It is joyously celebrated, inside and out.  Its boldness enlivens buildings and delights the spirit.  Vibrantly painted shutters, doors, verandahs, balconies and window frames purposely contrast with each other and the walls where they rest.  Overall, it is a powerful element in design and expression, for it has the ultimate ability to transform surroundings and conjure a multitude of emotions.

In Haiti, for example, bold tones of red, black, and icy blues and silvers are often used.  Inspired by the Yoruba culture of West Africa, from which much of the population had its roots, these colours are also considered a status symbol.  They dot the Haitian landscape, from the homes of town and country to the commercial buildings to the fine art Haiti is so famous for.   In contrast, the French-influenced islands of Guadeloupe and Martinique are softer in their colours, adorning their buildings in a pastel palette.  Somewhere in between are the sugary-sweet colours of the British West Indies; hot pinks, turquoises, lilacs and bright yellows dominate these islands.  These mesmerizing palettes are inviting in their own special way and often transcend into the home interiors and artwork of the region.

All colour schemes start somewhere.  Some people draw inspiration from their favourite colour, a unique rug, or a personal piece of artwork.  But most importantly, the colours chosen almost always appear to be a direct reflection of those who live there.  This philosophy carries over to contemporary Caribbean architecture, especially to commercial buildings.

Today, more than ever, special attention is being paid to the new construction being developed in the Caribbean.  Many companies are working to ensure their new buildings are carefully introduced into the surrounding environment.  The proper use of exterior colours is one way to assist with this.  On the interiors, work environments are becoming more “people-friendly,” utilizing colours that inspire and soothe, as well as excite and energize.  Caribbean hot spots, such as local bars and eateries, tend to implement bolder hues to energize the emotions.  Largely, today, as in the past, inspiration is drawn from the Caribbean’s seductive rainbow beauty.

Over the centuries, a diverse group of people from many different lands became a part of one world – The Caribbean Islands.  This special place, with its astonishing natural beauty, dynamic cultures a nd rich history, exemplifies these singular traits through its celebration of colour.  Whether on an office building exterior, a repainted verandah or a new home interior, colour will always play a leading role in attaining the “Caribbean style.”

Tim Peck is OBM International’s Regional Director and is based out of the British Virgin Islands’ office.