THE WATERING HOLE – The business of helping people have fun is an enormous one here in the BVI.  Entrepreneurs have developed niches for all kinds of ventures, selling goods and services to charter guests, villa guests and sailors – taking away their trash, renting them fishing gear and scuba tanks, driving them around the island and plying them with frozen concoctions. The list goes on almost forever. Every now and then, though, somebody comes along who creates a new category or re-invents an old one. 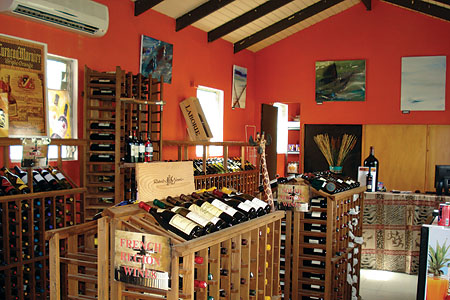 When Graeme and Brigitte Maccallum left South Africa, they did so on a cruising boat along with another couple.  Their intention was to cruise for a year or so but, by the time they reached the Caribbean, their funds were running low and they needed a source of income.

What better than to start working as captain and chef on a charter boat?  In the course of several years in the charter trade, they often found themselves looking for ingredients and products that they couldn’t find close at hand. Wanting to use familiar products from South Africa, they decided to see if they could import a few examples.
On a recent morning in their new venture, a wine emporium called “The Watering Hole,” located in the former BVI Yacht Charter office in Village Cay, Brigitte laughingly recalled their experience with importing. “The first product we wanted to bring in was Mrs. Ball’s Chutney. In order to import Mrs. Ball’s Chutney we needed to ship 26,000 bottles in a container. We mentioned this to friends who said ‘I’d really like this’, or ‘I’d really like that’, so we put together one consolidated container, all South African products. We managed to scrape together enough cash to afford to ship one container and we pretty much sold everything!”

That venture was sufficiently successful to spark an entrepreneurial spirit but, as Brigitte recalled, bringing in food wasn’t going to provide sufficient income. Drawing on their yachting background they “decided to branch out into yacht provisioning and supply boats with the products we were bringing in, and supermarkets, too of course,” she said. “Bobby’s was our first supermarket. And that’s pretty much how it grew. The boat side grew and the import side grew and the yacht management grew and I kept saying ‘Which one is it going to be?’ and Graeme said ‘We’ll keep them going side by side until we decide which one to drop.’ Well we never did drop any of them. Now, we’re pretty much in every supermarket on Tortola, every supermarket on St. Thomas, two supermarkets in St. Martin, St. John, St. Croix, and we’re in the process of trying to get into Puerto Rico. We started working from the chart table on our boat, and here we are today.”

Finding themselves short of space they decided to move to bigger premises. Rather than move the entire operation, said Brigitte, “We decided to just move our wines.” In the bright new wine shop stocked with wines from South Africa and elsewhere, it’s hard to believe that they began only a few years ago. “Graeme drew up the first business plan at the end of 2001 and we ordered the first container in 2002,” said Brigitte. “Officially the business began in 2003, so it’s only been three and a half years.”

The proud proprietors of the businesses Proudly African, Caribbean Yacht Management, and The Watering Hole are this month’s BVIYG Entrepreneurs of the Month. Congratulations, Graeme and Brigitte Maccallum.

You can contact them at 284-494-5954 or on the Web at
www.caribbeanyachtmanagement.com