BVI CADA – Many people move to the BVI for its beaches, its weather, and its Caribbean lifestyle.  Those same people often come from more populous places where “culture” means what sorts of arts and leisure are on offer rather than what kinds of dishes and attitudes are served up at local eateries.  Although the Territory boasts neither its own resident ballet company nor museum of Impressionist art, it does, like other vibrant communities the world over, support a variety of local arts groups including the CADA Players, founded in 1997 in order to support the ongoing work of the Community Agency on Drugs and Addiction (CADA), the theatrical troupe’s namesake.

For over a decade, CADA Executive Director Joanne Penney has produced shows focused on cultural diversity and personal responsibility while keeping in mind the reason audiences usually come to the theatre: to enjoy the live spectacle.  This season alone, the CADA Players under Penney’s direction have presented, on their own Stockpot-Theatre stage, Flambeau: the Passion of Flamenco, a show with colourful costumes and beautiful dancing about standing up to oppression and, at the HLSCC Auditorium, the Territory’s inaugural contribution to the worldwide V-Day movement produced in conjunction with the Family Support Network (FSN), another community organization dedicated to the betterment of BVI society. 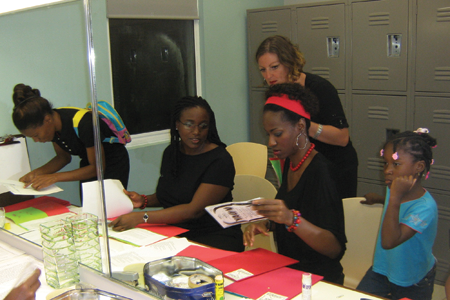 In keeping with their tradition of community involvement and exploration of local issues, the CADA Players will next be presenting Flambeau Havana, the sequel to their well-received autumn offering by a similar name.  The show, which traces the roots of Caribbean dance styles from ancient India to the renowned stages of the 1950s Cuban capital, will feature an international cast hailing from four of the world’s seven continents and choreography including a sultry flamenco tango as well as a group meringue performed by 10 energetic couples.

Flambeau Havana will be performed at 7pm both 19 and 20 April at the HLSCC Auditorium.  All proceeds will go, as with every CADA-Players production, to the furtherance of drug and alcohol education in the Territory.  The troupe is always looking for new members and performance opportunities; call 494-2324 for more information.