Alec Anderson competes in North American Regatta – At the Club 420 midwinter championships, Alec and crew Rian Bareuther from St.Thomas teamed up to take on the 76 other two-person boats.  The regatta started off slowly for the Virgin Island sailors, who hadn't had much time to practise leading up to the event.  Over the course of the three days of racing, the results posted by Alec and Rian would include highlights of two 3rd-place finishes, three 5th-place finishes and two 6th-place finishes to end up in a very respectable 9th-place overall out of the other 76 competitors.  They would also be top-finishing Caribbean team in the regatta, with Tyler Rice and Olin Davis from St.Thomas finishing 26th overall.  The Club 420 fleet consisted of many of the top high school sailors in the United States, as well as college sailors, and two teams from Canada. 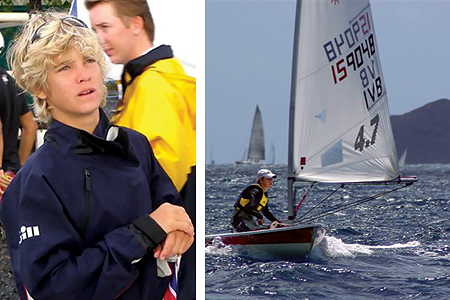 With just one day rest between regattas, Alec would make the four-hour drive from the east coast of Florida to the west coast of Florida for the 2008 Laser radial midwinter regatta.  This was an International Sailing Federation grade 1 event, with points going towards the sailors world ranking.  Light winds started the regatta;  Alec would prove these conditions promising and boast a 3rd in race one.  The inconsistency of the wind over the day would also reflect in the scores.  Alec followed up race one with a 33rd and an 11th.  The next day brought out more wind with a nice 12-17knt south easterly.  Alec would finish the day with a consistent pair of 17s and a 16th, to sit in 28th out of the 96 competitors.  The fleet consisted of many of the top Laser radial sailors from Canada, USA, Puerto Rico, St.Thomas and Ecuador.  The fleet also included World Sailor of the Year, and two-time world champion, Paige Railey of the United States.

With no racing on either the Saturday and Sunday of the event due to thunderstorms and lack of wind, the race committee was forced to call it an event after only six of the 10 scheduled races were held.  This would leave Alec in 28th and 3rd out of the Caribbean sailors.  These events as well as others over the next few months will be used as tune-up regattas for Alec who will be attending many international events. Good luck Alec!

And if that's not enough, check out the forum on www.IC24.org for more weekly beercan racing action right off the southern end of Nanny Cay.   IC24s, are the new fad in racing and fast spreading to the rest of the Caribbean and North America.