Do you wahoo? – My first fishing experience in the BVI was on a 17-foot Boston Whaler, using two rented rods and store-bought bait, trolling on the South Drop.  We returned that day with a dorado and a kingfish, and threw back several feisty barracudas.  So consider me living proof that anyone can go fishing in the BVI. 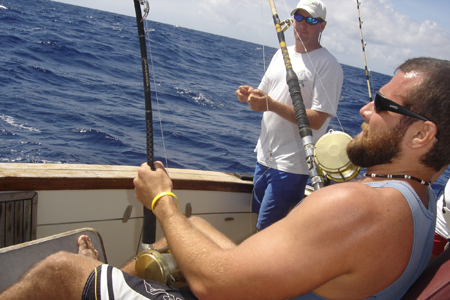 The Territory is home to some of the best fishing grounds in the world.   The North Drop, which is north of Anegada, attracts one of the largest fish in the ocean, the famed Atlantic Blue Marlin.  Though, if hunting these monsters, which can reach more than 1,500 pounds, you may want to be in something a little bigger than a 17-foot boat.

The Atlantic Blues are found in the BVI during the summer months, mostly in June, July and August.  It is no coincidence, then, that the BVI waters are home to two of the major sportfishing events in the region, the newly created Rolex-BVI Billfishing Tournament in late July and the famed Boy Scouts Tournament in late August, which is fished in the BVI but based out of St. Thomas.   Anglers compete for thousands of dollars in prize money during these events, and they attract some of the top sportfishing boats in the Caribbean.  But the competition isn’t cheap, as entry fees are typically more than $1,500 per angler, and that doesn’t include chartering the boat.

A third tournament, the ESPN Xtreme Billfish Challenge, has been filmed in the BVI twice and once in the USVI, but has been fished all three times in BVI waters.   This event, which brings together the top sportfishing boats in the world, awards points for not only catching fish, but for releasing them unharmed and properly tagged.   This series, which hits angling hotspots from Florida to Venezuela, offers a $1 million prize to the top overall boat and crew.

The BVI has many alternatives for those not wishing to spend giant amounts of money in pursuit of giant fish.  Several local tournaments are held throughout the year, including the Willy-T South Drop Challenge in the spring and the Anegada Reef Hotel’s Lowell Wheatley Memorial Tournament in the fall.   There is also the Fisherman’s Day Tournament organised by Conservation and Fisheries and the Virgin Gorda Easter Tournament.

Local fishing boats such as Whopper, Big Ting and Mahoe Bay offer full and half-day charters throughout the year.   And the best thing about fishing in the BVI is that there are usually fish around to be caught.   The marlin season is in the summer, and when they stop biting the wahoo season generally starts, usually in late November.   In December the dorado, also known as dolphin or mahi-mahi, start to appear, and they usually stick around until late April.   Adding to the catch are blackfin and yellowfin tuna, which are prevalent throughout the year, though the peak times to catch them are in the winter months and early spring.   Also lurking in BVI waters during those times are smaller billfish species, such as white marlin and sailfish, and kingfish, which is a staple of the “local” buffets found in many restaurants.

The North Drop is the BVI’s most famous fishing grounds, but it is far from the only area where gamefish can be caught.   The Sea Mount, southeast of Virgin Gorda, is a great place to catch wahoo and marlin.  It is also a much smaller fishing area than the North Drop, making it a favourite for charter boats and local captains looking for fish to sell to restaurants.  Closer to shore, the South Drop, which extends from Virgin Gorda to Norman Island, is a great place to hook up dorado.

The South Drop is an ideal place to hit if one wants to go fishing without chartering a boat.  During the winter, frigate birds can be seen circling over schools of dorado.  Following birds is the easiest way to find fish, and frigates are a pretty good indication that fish are near the surface looking for food.  Smaller “tuna” birds often follow schools of blackfin tuna.  While these fish aren’t large (anything over 10 pounds is considered big) they are nevertheless delicious.

Wahoo and dorado can generally be caught on ballyhoo, either with or without a skirt, which is a plastic lure that fits over the top of the bait.  Tuna will also go after ballyhoo, but will also strike a cedar plug.   Richardson’s Rigging in Road Town carries an assortment of bait and lures, and will also rent rods.   Island Marine Outfitters, in Road Reef Plaza, also has an array of fishing equipment.   However, the first stop any deep sea angler should make is to the Ministry of Natural Resources and Labour, as a licence is required.  Guests on charter boats, may be able to acquire one from their charter company.

In addition to deep sea angling, the BVI has some of the best fly fishing that can be found anywhere this side of the Florida Keys.  Popular spots are located near Anegada, Jost Van Dyke and Beef Island, but it is probably best to hire a guide.  Caribbean Flyfishing on Tortola and Garfield’s Guides on Anegada offer excellent guides services.