Don Hebert has been shooting houses and landscapes in the Virgin Islands for almost 30 years—and has loved every minute of it. The bright pastels, azure waters, clandestine sunsets and tropical flora have made the VI an ideal place for a photographer from Michigan. Don first moved to St Thomas in 1983 and taught as a high school teacher for five years before trading in the chalk and textbooks for a full-time job as a photographer. Although he never personally took a class on the subject, the former teacher said his hereditary roots are grounded in the arts. Today, the established photographer has a portfolio that includes over 1,000 villa shoots and countless side projects. In this, Don’s work focuses on that special hour when the sun crests and slowly slips below the horizon. It’s not a bad gig from the verandahs of some of the BVI’s finest homes. 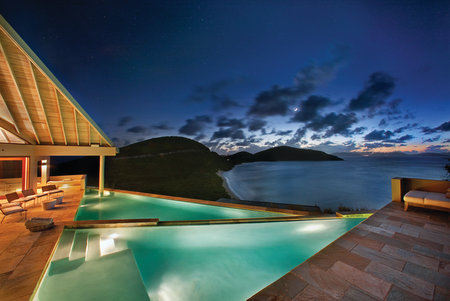 Don captured this photo poolside at 100 Pond Bay in Virgin Gorda. The luxury villa boasts one of the most magnificent views of VG’s north coastline, overlooking Savanah Bay. The linear composition from the property, and the soft, overexposed lights from the pool and the skyline help this photo to bring the view to the property. 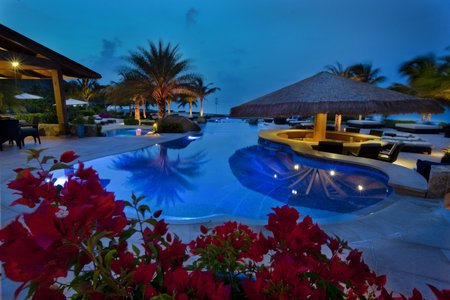 This photo was taken at Symbio, a villa previously owned by actor Morgan Freeman. The Virgin Gorda property peeks out to Tortola, from where the sun drops to create an amazing sunset. This photo was captured shortly after the sun dropped, with very little multiple light. Don used two strobes to bring in the foreground and allow for an otherworldly mood. 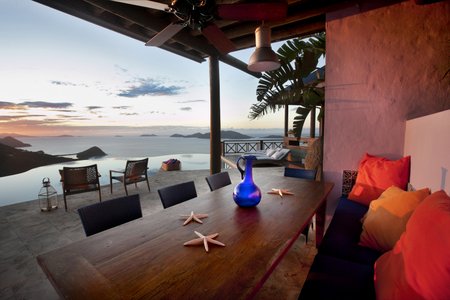 These photos were both taken at Tingalayo Villa, on Tortola’s north side near Little Apple Bay. The warm colours emitted from the setting sun helped to set the mood for these warm photos—both of which take in the dramatic skyline. For the panorama shot, Don stitched together seven separate photos to extend the views over the spacious pool from St John to Jost Van Dyke.

This shot was taken at Oil Nut Bay in June, shortly after the completion of this residential development and beach club. Oil Nut sits on a private peninsula on the eastern tip of Virgin Gorda, from where it invites enchanting views like this one over its majestic blue pool, flanked by a variety of palms and festive flora. Don used the bright red hues from plant to contrast with the bold blues of the pool and soft, post-sunset views in the distance.

Don works from his studio in Magen’s Bay, St Thomas, but travels frequently around the BVI to photograph our lush landscapes and private villas. Of photography, Don says he most enjoys the lifestyle that it affords him. “It opens up a lot of doors, and gets me traveling to places and meeting people I normally wouldn’t,” he said, recounting a recent experience he had photographing Sir Richard Branson and Kate Winslett shortly after the Necker greathouse was struck by lightning. More of Don’s work can be viewed at his personal website, www.donhebert.com.