Green is Gold in Europe – One of the many ironies inherent in the current environmental debates is that the existing US administration, by doing all it can to drag the price of oil above the $100 per barrel benchmark, has created a climate in which old and proven sail technologies are suddenly proving their economic value.    Take, for example, the wine producers of Languedoc who, in February, were to commence shipping 5,000 cases to Ireland aboard a 19th century barque, the Belem.  This ship, the last merchant sailing vessel to be built in France, in 1896, will sail from Bordeaux to Dublin as a precursor to later voyages to Bristol, Manchester and perhaps Canada.

The point of the exercise is to reduce the carbon footprint of the wine.  Shipping it this way will save 18,000 lbs. of carbon compared with air transport. While partly a marketing gimmick, this effort reflects the interests of British consumers who have prompted giant grocer Tesco to adopt waterborne transport as a smart environmental option.   According to a report in The Guardian newspaper, last October Tesco started ferrying wine by barge from Liverpool to Manchester along the Manchester Ship Canal.  According to Tesco, the move took 50 lorries off the road every week and cut carbon emissions by 80 per cent.  Tesco’s new cargo service involves three journeys a week, delivering an estimated 600,000 litres of wine on each journey along the 40-mile stretch of the canal. The containers of wine from Australia, California, Chile and Argentina are then transported to a bottling site a half a mile away where they are packed for Tesco supermarkets across Britain.

The French shipping effort is the brainchild of Frederic Albert, founder of the shipping company Compagnie de Transport Maritime à la Voile (CTMV). The Guardian quoted him as saying,  “My idea was to do something for the planet and something for the wines of Languedoc.  One of my grandfathers was a winemaker and one was a sailor.”

The 170-foot Belem is the first of seven ships planned to be working by 2013. Seven private investors have contributed 70 per cent of the business’ start-up costs of £40m.  Bank loans have provided the rest. “There is a lot of interest in green investments in France,” said Albert.  Ships will return to France with an equivalent tonnage of crushed glass for recycling into wine bottles at factories in Bordeaux and Béziers, he said.

The Germans aren’t far behind, although their plans are somewhat more elaborate in scope. Beluga Shipping GMBH has partnered with Hamburg company SkySails to exploit wind power using large tethered kites.  The 433-foot long MV “Beluga SkySails” set off on its maiden voyage on January 22nd, across the Atlantic to Venezuela, up to Boston and back to Europe, pulled by a giant computer-guided $725,000 kite tethered to a 15-metre high mast.  According to the company, “of all known concepts for effective and sustainable alternative propulsion of merchant vessels, SkySails represents the only suitable model: no bothersome masts on deck, no restriction of stowage space, no hindrances to loading and discharging, no risk to the crew, cargo or ship as well as reliable overall performance.  Utilisation of wind energy by means of the towing kite makes it possible to provide relief to the main engine—10 to 15 per cent less bunker consumption is expected in the initial phase of operation.” 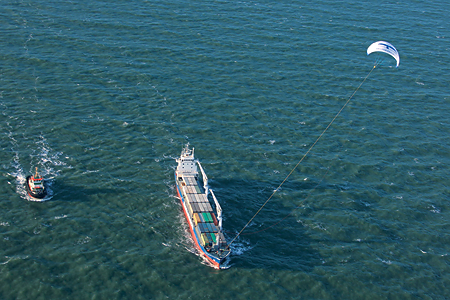 Under favourable wind conditions, the 160-square-metre kite shaped like a paraglider is expected to reduce fuel costs by up to 20 per cent or more ($1,600 per day) and cut, by a similarly significant amount, its carbon dioxide emissions.

The planned product range contains towing kite propulsion systems with a nominal propulsion power of up to 5,000 kW (about 6,800 HP). On annual average, fuel costs can be lowered between 10 to 35 per cent, depending on actual wind conditions and actual time deployed.  Under optimal wind conditions, fuel consumptions can be temporarily reduced by up to 50 per cent, says SkySails.