First Beat – So you’ve had the perfect start—clear air, tons of speed, right on the line at the gun.  Now what? Most sailboat racers who find themselves in this position ask the very same question. The good news is, whether you have had an Ace of Spades start or one more befitting the Joker in the figurative deck of cards representing boats in a fleet, you can work your way up to the big win.  What’s the big win, you ask?  The ROYAL FLUSH, also known as, leading at the first mark! 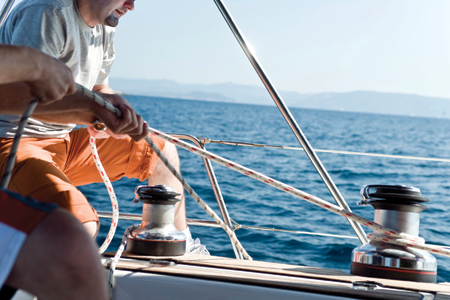 Think of the first beat of a sailboat race as akin to that first puzzle you attempted at the age of six that was intended “for children 12 and over.”  If you put your mind to it and somehow lock in every piece—shoot!… they might bump you up six years in life! Well, maybe not.  However, the first beat of a sailboat race can take that struggling amateur in the fleet and make him into the rock-star sailor who always has an entourage that resembles something out of Maxim magazine, and always seems to end up on the podium.

This is all great news; however, there is also some bad news—it’s not going to be so easy.  First, you’re going to have to ensure that you, your boat, your crew and everything that goes along with them are moving as fast as they possibly can up wind. That means you’re going to have to put in some serious non-racing hours on the water. Yes, the winning formula in sailboat racing consists of approximately 10-12 hours of practice for every hour of racing.  You do the math.

Second, you’re going to have to tackle the ever-shifting wind, velocity and direction on the first beat.  Think of the shifts and wind changes like cards in a deck, or pieces of the puzzle—get them all lined up and looking good and you might have something!  Keep looking up wind for the next one, and if you miss one, no big deal, be patient and you might just catch the next.  Stay away from hitting the corners of the race course, but don’t be afraid to play up a side.  Stay with the pack around you and really try to out-sail just them rather than the entire fleet.

Play the first beat smart, keep your composure and, of course, sail fast.  You never know, you might find yourself on the podium or on the next flight to Ibiza with Van Halen.