SOME HINTS FOR THE NOVICE PIRATE – When the average tourist steps off the average airline flight and into the average rental car, he or she has a high expectation that the car will operate without a hitch, that the seats will be clean and sturdy, all the lights will work and that there will be a jack and a jack handle, as well as a spare wheel, should trouble strike. 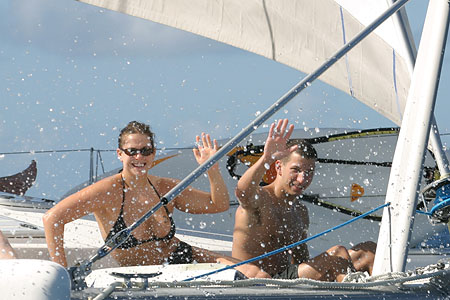 Pity then the average charter guest who steps off the average airline flight, probably a few hours late and missing some crucial pieces of luggage, and onto his long-dreamed-of charter yacht.

What should his or her expectations be? Is a charter yacht like a rental car? Should you expect to just hop aboard, turn the key and go, or do you need to endure the endless briefings and instruction that generally accompany the charter’s beginning?

John, a U.S.-based advertising executive, described a boat briefing that dragged on for more than two hours: “First, the briefer was showing the various folks how to wrap a line around a winch and how to tack the Genoa. I know that. I don’t need instruction in how to pump the head—just show me where the valves are.” He ended up in a shouting match with the young briefer. It got worse. “Then when I finally got to my boat, after a briefing on a different one,” he told BVIYG, “the key to the sliding door on our catamaran was snapped off. We asked for a new lock and key and were told it wasn’t possible. We had to get very aggressive about that but finally a new lock and key were installed. Don’t tell me I don’t need to lock my boat, OK? I’ll be the judge of that.”

Then the charter base manager insulted one of his crew, a friend from St. Lucia, by blaming him for breaking the key. “She kept going on about the ‘boy from Bobby’s’ who had been on our boat. Well, we did our own provisioning. Finally we figured out she was talking about Terry. That didn’t help things.”

At the other extreme we have heard about briefings that were so perfunctory as to be useless.  If the briefer points to the stove and says, “Here’s the stove,” but doesn’t light it, what do you do a few hours later when you’re sitting to your mooring and can’t get the thing working? Sometimes of course the little things all begin to add up and the charter customer begins to feel as if he’s on a doomed boat. The fact that a boat might be missing an anchor and chain shouldn’t really matter—the riggers can fit one in about 20 minutes flat. But the questions arise: did no one notice? What else could be wrong?

And the biggest question of all: what can I do to make sure my charter goes well? Here a few hints garnered from conversation with sailors on both sides of the charter equation.