Splice the mainbrace – Man has been building boats since he stood upright enough to walk.  The art of customizing, however, is probably a much later addition to the boat builder’s portfolio, and it possibly began right here in the Caribbean.Tortuga, the small island about 20 miles off what was formerly referred to as Hispaniola (now Haiti and the Dominican Republic) had been a base for Buccaneers since 1638, and it was the Buccaneers who first mastered the art of rebuilding ships.  They did so not only to improve them for fighting, but also so they would not be identifiable to previous owners. 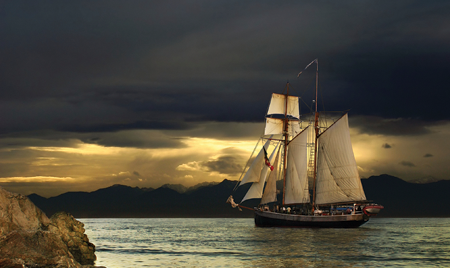 Buccaneers considered themselves to be daredevil pirates, although really they were butchers, taking their name from the barbequed pork, known as ‘boucan’ they sold to the Spanish and British trade ships.  Their legacy goes beyond their butchering; today’s carpenters and shipwrights use many of the same methods for reconstructing ships and boats, although these modern makers use a variety of products to make redesign and customization easier.  And, if you fancy a bit of boat DIY, there’s a lot to choose from.

Outside the use of marine plywood is a plastic material called StarBoard.  Useful for a variety of projects from large rebuilds of cabins, replacement of decking, swim platforms and engine brackets to small drink holders, StarBoard is easy to cut, needs no painting and is joined by glue or screw. StarBoard is also available in non-skid and comes in sheet sizes up to 8 x 4 ft.

Of course, West System is the most well-known method of creating fiberglass structures or repairing your boat and comes in various quantities.  An epoxy resin used with fillers and fabrics, it is the most versatile of materials and even can be used for complete hull moulds.

There are a large amount of repair kits too, from Evercoat’s “Match n’ Patch” Gel Coat to MarineTex that claims to rebuild stronger than original. It can be used on everything from engine blocks to water tanks and adheres to metals, plastics and wood. Newer products include marine Fibretec from Evercoat, which is a mixture of glass fibres and Kevlar pulp – ideal on steel and aluminium repairs.   “Goop It” is excellent for seam repairs and rivet leaks and it contains graphite too, making it ideal for protecting boat bottoms along with sealing hatches. “Peel n’ Patch” is a unique, light-activated fiberglass re-inforced patch ideal for water lines, sanitation systems, antennas and fuel tanks.

Just a new coat of paint can have amazing effects on your boat’s appearance. The new range of “Perfection” paint from Interlux is a two-part paint with the everlasting finish of Awlgrip, but much easier to use. Pettit Paints’ range of one-part epoxy paints is also well known for durability and shine, but nothing compares to the look gained from a professional application of Awlgrip or Awlcraft paints.

If you are thinking about splicing your mainbrace, however, you might want to leave the epoxy alone for a while.  “Splice the mainbrace,” which is often mistaken for pirate slang, is actually a term coined by the Royal Navy. In the days of sail, the mainbrace was the largest and heaviest of all the running rigging.  Braces are the lines with which you control the angle of yards, or sail. During action, Gunners commonly made the mainbrace their prime target as without this the ship could not change tack.  Repairing the mainbrace was strenuous work; it was long rope of hemp up to 5 inches in diameter running the length of the ship.   The repair was generally carried out by the ship’s best Able Seamen under the supervision of the Bosun.  On completion of the task it was customary for the men to be rewarded with an extra ration of rum. The Bosun would take a sip from the ration of each of the men he had selected for task.   Later the order “Splice the mainbrace” came to mean that the whole crew would receive an extra ration of rum on special occasions.  Rum rations were withdrawn in 1970.