Scuba Diving history runs deep – So, who is the most famous scuba diver you’ve ever heard of? Might it be Lauren Hutton, Lloyd Bridges, Buster Crabbe or Tanya Streeter? (Tanya, by the way, is the only women to ever beat a man’s world record in any sport). Maybe Dumas or Coustaeau spring to mind.  Whoever it is, I bet you never gave a thought to the real pioneers of diving such as Aristotle, Alexander the Great and Leonardo Da Vinci. 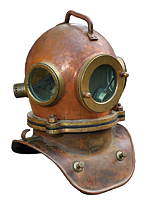 In the Trojan Wars of 1300BC divers were involved in sabotaging enemy ships by boring holes in the hulls or cutting anchor lines.  Homer, in quieter times, mentions watching Greek fishermen diving to depths of a 100 ft. To combat the effects of pressure they poured oil into their ear canals and took a mouthful which was spat out as they reached the bottom.

Aristotle, in 360 BC, mentions the use of a diving bell in his Problemata, stating “In order these fishermen of sponges may be supplied with a facility for respiration, a kettle is let down to them – not filled with water, but with air, which constantly assists the submerged man…”  A couple of hundred years later, Alexander the Great used divers to clear the harbour during his assault on Tyre.  He himself made several dives in a crude bell.

Despite all this activity – which included establishing as law the first pay scale for divers (in 100 BC) – it wasn’t until the 1500s  that a certain Leonardo Da Vinci attempted to take diving to the next level.  Da Vinci was responsible for designing the first Self Contained Underwater Breathing Apparatus (SCUBA), combining air supply and buoyancy control.
The explosion of SCUBA diving as a recreational sport didn’t really take place until the 1990s when it was estimated that nearly 500,000 new divers were being certified each year.  There are numerous organizations controlling all aspects of diving and diving safety.  The granddaddy of them all, the YMCA, began nationally recognized scuba certification courses in 1959.  PADI, the Professional Association of Diving Instructors, has been in existence since 1966.  Scuba Schools International, which merged with the National Association of Scuba, was launched in 1970, and the 1970s brought us the first ever dedicated trade show for divers (DEMA); and DAN, the world renowned dive safety association, was formed by Duke University in the USA in 1980.

Apart from becoming more affordable, one of the main reasons for the explosion of interest in recreational diving was undoubtedly the James Bond movie, Thunderball.  Or, then again, maybe it was The Deep with Jacqueline Biset, shot in 1977.  Snorkels, fins and masks had been in use since 1930, but somehow the stars of these movies made them look a lot more comfortable than they actually were. Goggles made from the polished shells of tortoises were first used in 1300 BC by Persian divers. Rubber masks with glass lenses were pioneered in 1930 along with the first patent on fins in 1933.

Diving has come a long way since Homer’s early reports, but man’s attempts to conquer the ocean still continue with longer and deeper dives.  These days, depths are plumbed with the assistance of submarines and bathyspheres.  The latest technological development for yet deeper dives is called “Like A Fish ” – which hopes to recreate artificial gills for humans.