THE GREAT DIVIDE – For thousands of years it was the people of the Pacific and Indian Oceans who, almost exclusively, designed, built, and sailed multihulled craft. And only now, early in the 21st century, has the multihull concept become a global phenomenon. Manufacturers are going multihull manic, producing beautiful sailing machines, jet passenger ferries, super-fast powerboats, luxury yachts, you name it. 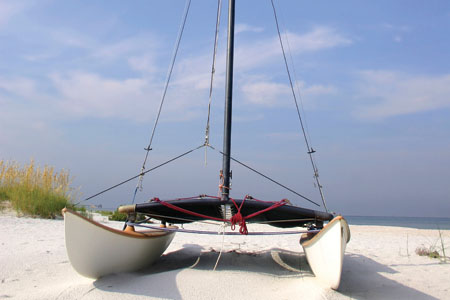 Multihulls are now at the cutting edge of water transport, and the best of contemporary marine design is producing great new takes on the time honoured principle of the multihull – outrageous shapes on ultra high-speed boats, unprecedented stability and occasionally, spectacular disasters.

The great divide in the nautical world is between die hard traditional sailors set in their monohull ways and the technophiles attesting to the advantages of using more than one hull. Of course, multihulls are nothing new. The idea of making faster, more stable boats dates back many centuries. Single-outrigger canoes, called proas, were first observed during Magellan’s voyages in 1521, and these craft routinely achieved blazing speeds of 20 knots whilst embarking upon open-ocean voyages covering thousands of miles. Not only were they highly seaworthy boats, but their navigators possessed skills that we are still trying to understand today.

As you can imagine, this was quite a shock to sailors on slow lumbering ships that could barely beat to windward and were in danger of breaking up if they ever felt the bottom in anything but the calmest waters. Despite great intrigue and curiosity at the time, multihulls didn’t have much effect on European boat building traditions.

The first multihull yacht was “invented” by Sir William Petty, who launched a 30’ catamaran in Dublin on 22 September 1662. He named her Simon & Jude, but King Charles II insisted she be renamed The Experiment. Her hulls were cylindrical, and she was tested in a race organized by the Royal Society in 1646. She beat all other entrants. About two hundred years later, another creative designer, John Pike, built Nonpareil, a vessel with a trio of 25-foot long, 30-inch diameter rubber hulls and rigged her as a schooner. He proceeded to make an eastward crossing of the Atlantic in 51 days. And when Nathanael Herreshoff soundly thrashed the competition in a New York regatta in 1876 with Amaryllis, a 25-foot catamaran, he was banned from all future races.

In 1937, a Frenchman built a 35’ double canoe in Hawaii and made an epic 264-day voyage back to his homeland via the Indian Ocean. But it wasn’t until the late 1950s that the groundwork was laid for the explosive growth of the field. James Wharram crossed the Atlantic in a 23-foot Polynesian-style catamaran that he built for $400, then made a circuit from the Caribbean to New York and thence to England in a 40-footer named Rongo. Shortly thereafter, the legendary Arthur Piver made a crossing in a simple homebrewed trimaran.

The technology’s time had at last come, and since then the field has gone mainstream. But there are serious design issues to consider, and it’s not hard to build something that sails like a pig or is even prone to disaster.