ALL GEARED UP AND NO WHERE TO GO – There’s a yachting week or regatta in the Caribbean almost every week for the next few months.  Some are deadly serious with Olympic qualification or world rankings at stake; others take on a more sedate stance, where taking part is the only real thing that matters; and of course there are always those few that use the banner headline but are, in reality, just an excuse for like minded boaters to congregate and party. 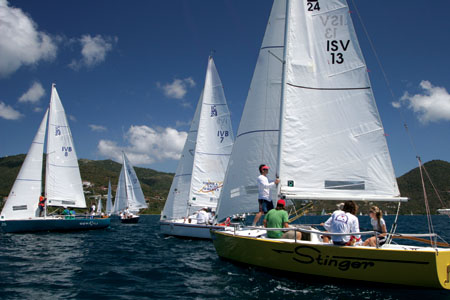 At the top end the regatta, like every other facet of life, has seen the need for speed drive ambitious captains and owners to the very extremities of their sport.

Rope used to be rope but now it even comes with Kevlar!  If you want the ultimate in spinnaker sheets, for example, simply walk in to your local chandlery and ask for a double braided line with a polyester cover and a technora/dyneema sk-75 core.  You could just say you want some T900 line, but half the fun is in the techno jargon.  Both durable and light with no moisture absorption and no creep, T900 is quite simply one of the best lines in the world.

And to feed your running lines, Harken probably offers up the best in blocks.  Remember, though, Lewmar has a range of syncho blocks that combine geometry, sheave ratios and a free spin bearing comparable to most pro racing blocks, but at a much more affordable price.

Lewmar also has a great range of “ocean series” winches. Constructed from the finest materials, the winches offer a great deal of pulling power and some seriously smooth handling, even in the toughest conditions.
Spinnaker sails can make the big difference in down wind racing, and a spinnaker requires a pair of sheets and Ronstan snap shackles (the Wichard version require a little more effort to release under load). The spinnaker can be difficult to operate if shorthanded, but a device called a chute scoop makes life simple and easy – the sail is filled by raising the scoop and doused by lowering it.  They are made from light-weight rip stop nylon, with all lines contained neatly within their own pocket on the outside of the scoop to avoid tangling with the sail

Of course the regatta is not all about racing, there is a great social scene too.  So, make sure you kit yourself out in this year’s range of Sperry shoes or Henri Lloyd casual gear. Clothing manufacturer, Gill, also make a great range of rash guard clothing for men and women to protect you from the harsh sun and salt air.  Complete the look with a pair of fingertip-less gloves from Harken or Ronstan, and a trendy waterproof tote from Watershed.