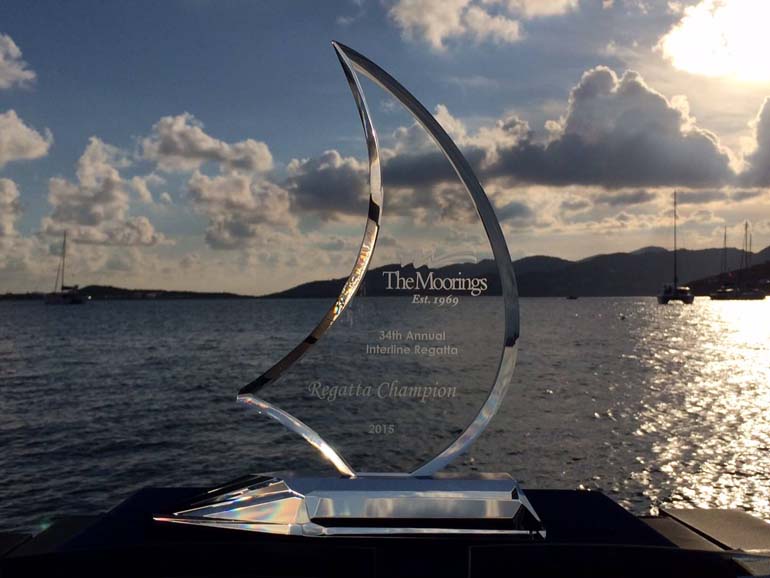 “Cane Garden Bay has been taken over by pilots!” was the rumour circling the BVI community, sparking intrigue on October 13, 2015 as a fleet of The Moorings yachts swarmed the bay and their passengers appeared on shore. 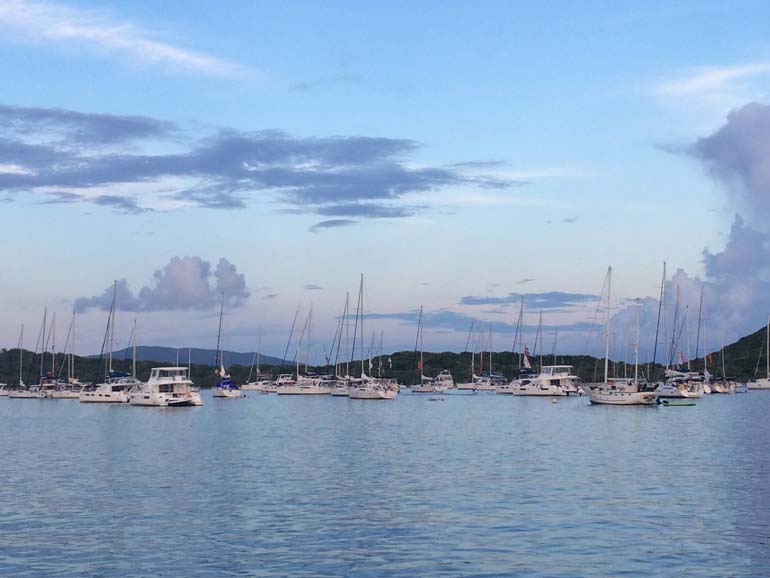 The kick off to the 2015-2016 regatta season in the BVI began with a special set of visitors who returned for their annual event. The Moorings 34th Annual Interline Regatta welcomed back employees of 17 airlines to compete in 10 days of sailing and extravagant parties. Each year, the regatta takes place in the BVI where The Moorings was formed in 1969 by Charles ‘Charlie’ Cary and his wife Ginny.

“The Interline Regatta is a unique opportunity for sailors of all skill levels from all over the world to come together, and celebrate the beginning of a new sailing season in the British Virgin islands,” said Ian Pedersen, Marketing Manager of The Moorings North America. 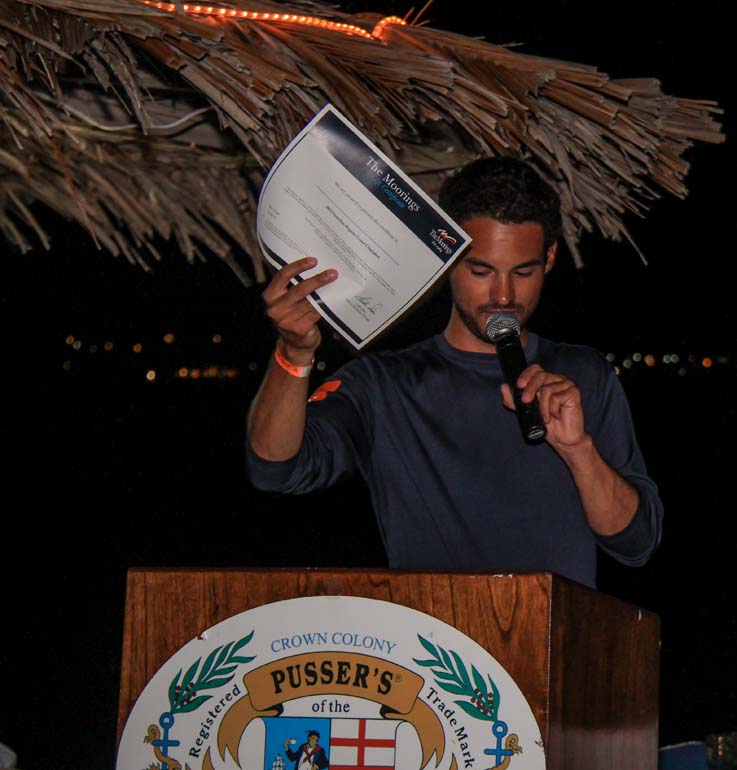 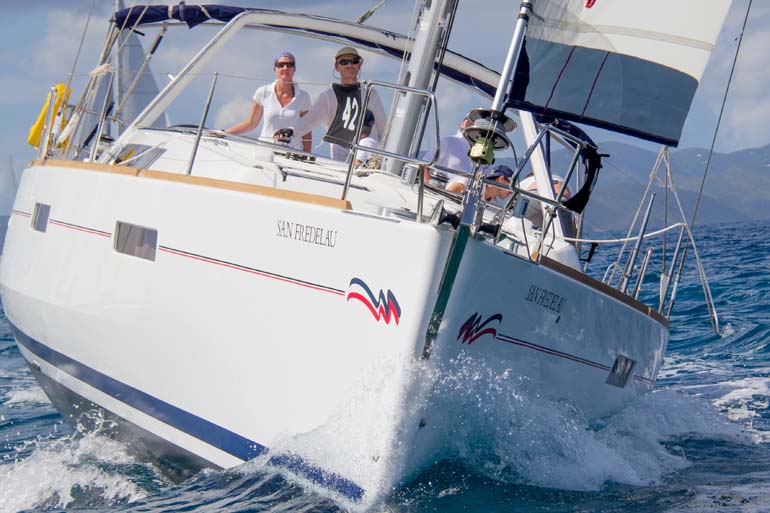 Participants relish the traditional regatta experience along with a full itinerary of dinners, parties, and recreational activity catered to those in or associated with the lively airline industry.

“There is a surprisingly large sailing community within the airline industry, and many of those who participate in the Interline Regatta own their own yachts. Some veterans have attended all 34 regattas,” said Ian.

This year, 234 individuals gathered on 20 race boats, half of which were brand new to The Moorings fleet. Not only were the social events attended by the participants themselves, but by numerous groups who chartered ‘party catamarans’ for the duration of the regatta to join the excitement. 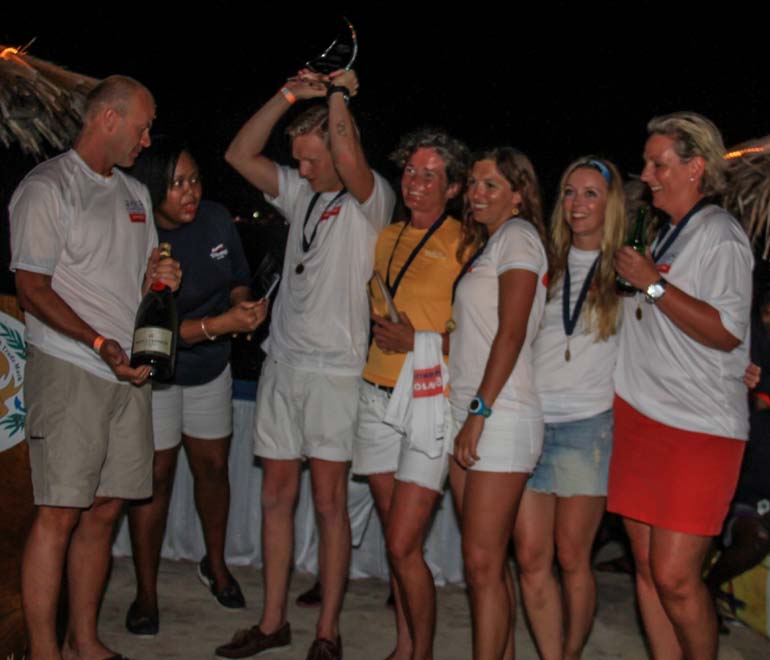 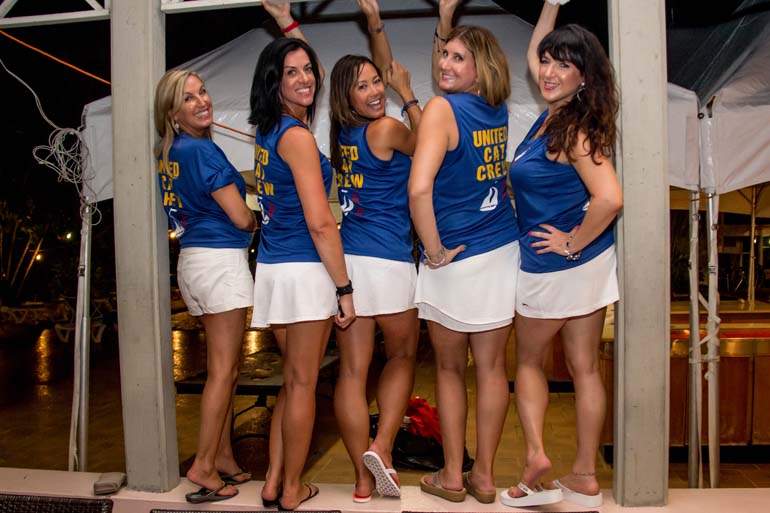 “We’ve been attending the regatta for the past three years. It’s great to come back and see your friends for a reunion in paradise,” said Chris Graves, First Officer Pilot of Alaska Airlines.

On Day One, the boats met together in Cane Garden Bay for their opening ‘Neon Night Party’ after picking up their chosen yacht from The Moorings base on Tortola. After two days practice sailing to Jost Van Dyke and then back to Tortola, participants met for a delicious buffet Welcome Dinner at the Mariner Inn and Marina at The Moorings. Four exciting days of racing followed, each with a nightly dinner or party with a prize of Prosecco champagne awarded to the winner of the race. 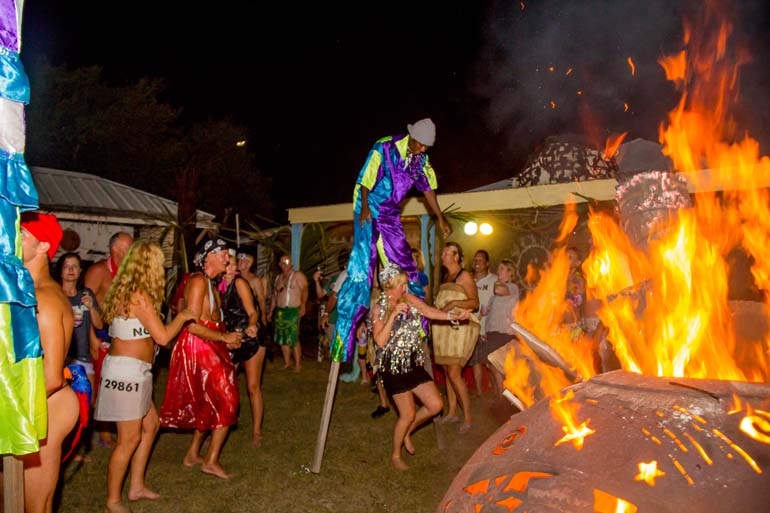 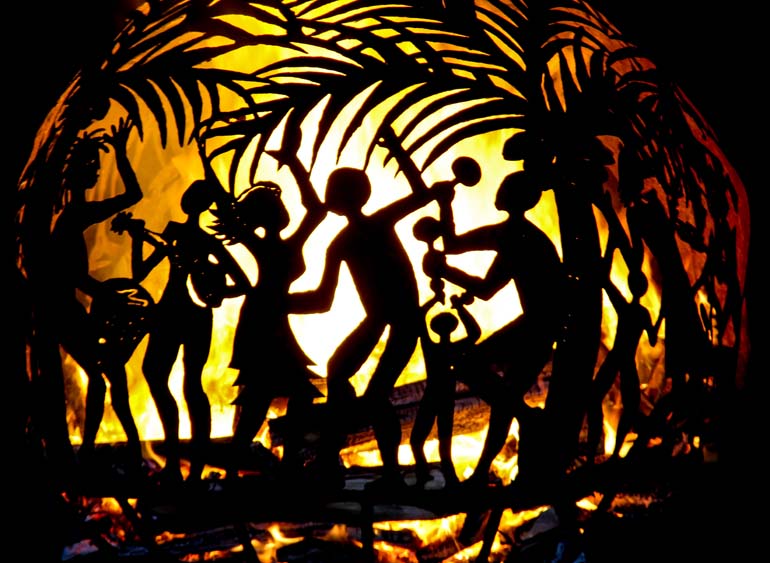 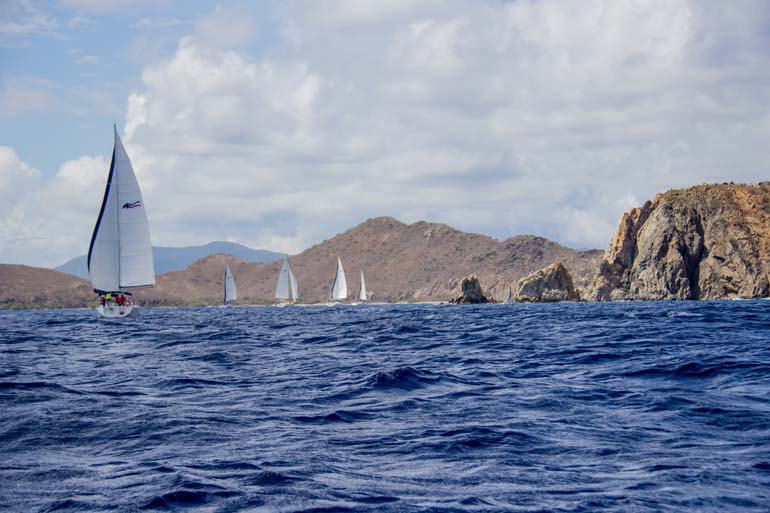 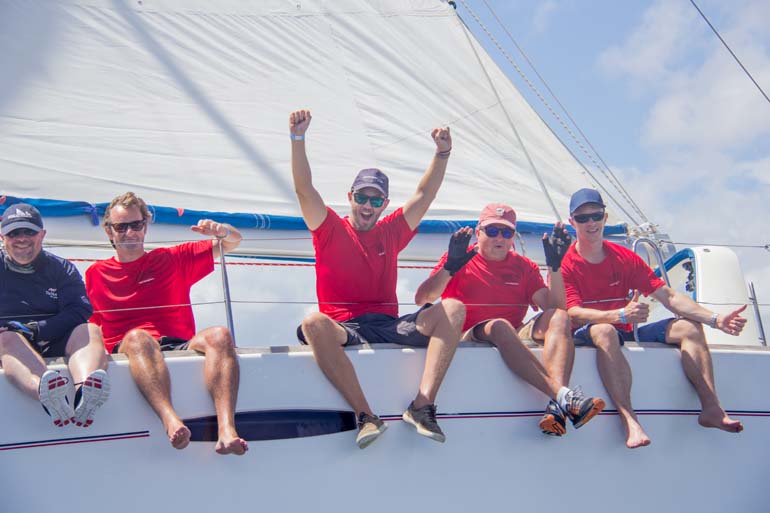 A ‘Lay Day, Play Day’ in the prestigious North Sound community on Virgin Gorda at Leverick Bay between race days Two and Three gave everyone a chance to relax, play games, enjoy helicopter charters, followed by a Pyjama  Party. 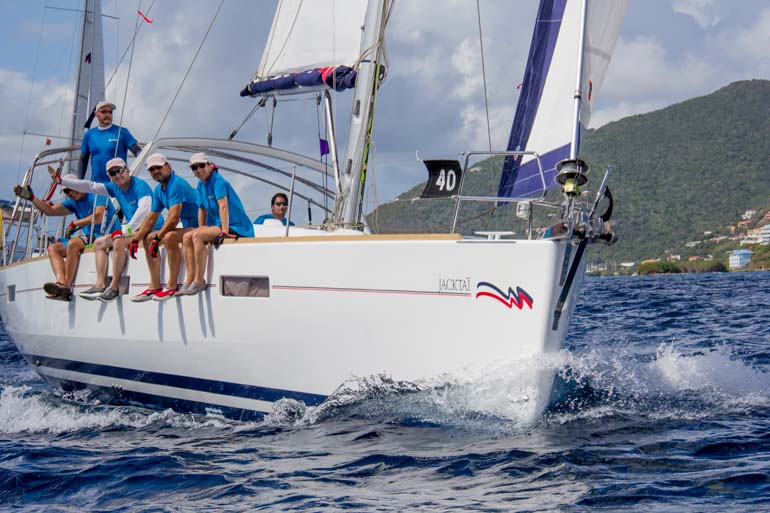 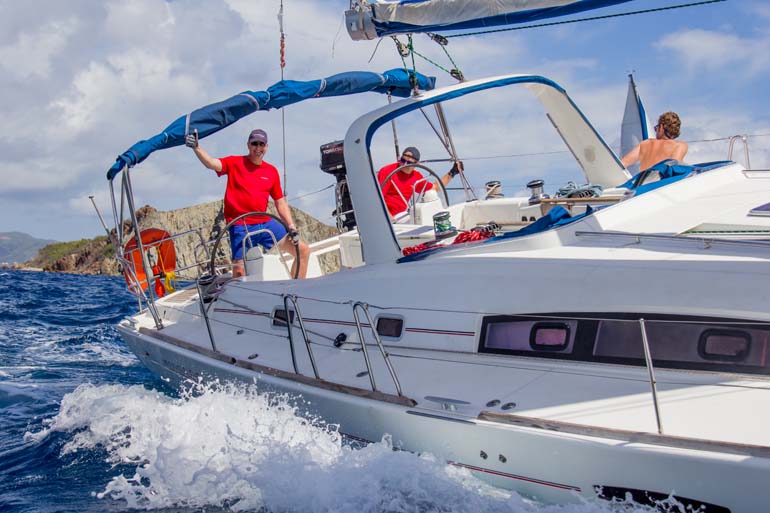 For the 2016 season, The Moorings global fleet invested $50 million dollars in the purchase of brand new yachts to be introduced between now and next October. All of the competing yachts will be less than two years old and comprise a fleet of 51, 45, and the new 42 ft monohulls.

“It doesn’t get any better than this…the British Virgin Islands is the ideal set up for sailing, and we are excited for an even bigger and better event in 2016,” said Ian with excitement.

For more information on the 2016 Interline Regatta visit moorings.com/interline. 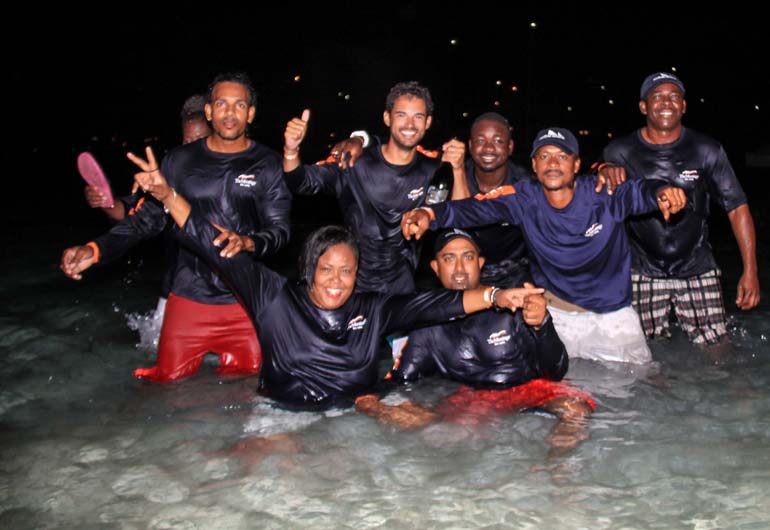